The species is native to tropical eastern Africa (Kenya, Mozambique, Somalia, southern Ethiopia and Tanzania) where it lives in open areas, semiarid as well as seasonally flooded, along the coasts, the banks of rivers and lakes, at the edges of swampy zones or wherever there is availability of water underground that it can reach with its deep rooting apparatus, from the sea level up to about 1400 m of altitude, on calcareous soils.

The name of the genus comes from the Greek verb “ὑφαίνω” (hyphaino) = to weave, to braid, with possible reference to the braiding of fibres in the pulp of the fruit; the specific name is the Latin adjective “compressus, a, um” = compressed, with reference to the fruits rather flattened laterally.

The Hyphaene compressa H.Wendl. (1878) is a very variable dioecious species with stems, about 20 m long and of up to 40 cm of diameter, of grey colour and fissured vertically, usually solitary, even if at times produces 2-4 stems at the base, that in the adult plants divide dicotomically 4 or 5 times. The leaves are costapalmate, divided in 35-40 linear-lanceolate segments with acuminate apex, 0,8-1 m long at the center, united at the base for less than half of their length, of intense green to bluish green colour. The 0,7-1,2 long an about 3 cm broad petiole, is provided at the margins of robust blackish brown spines curved upwards about 1 cm long; the foliar bases remain long time on the plant. 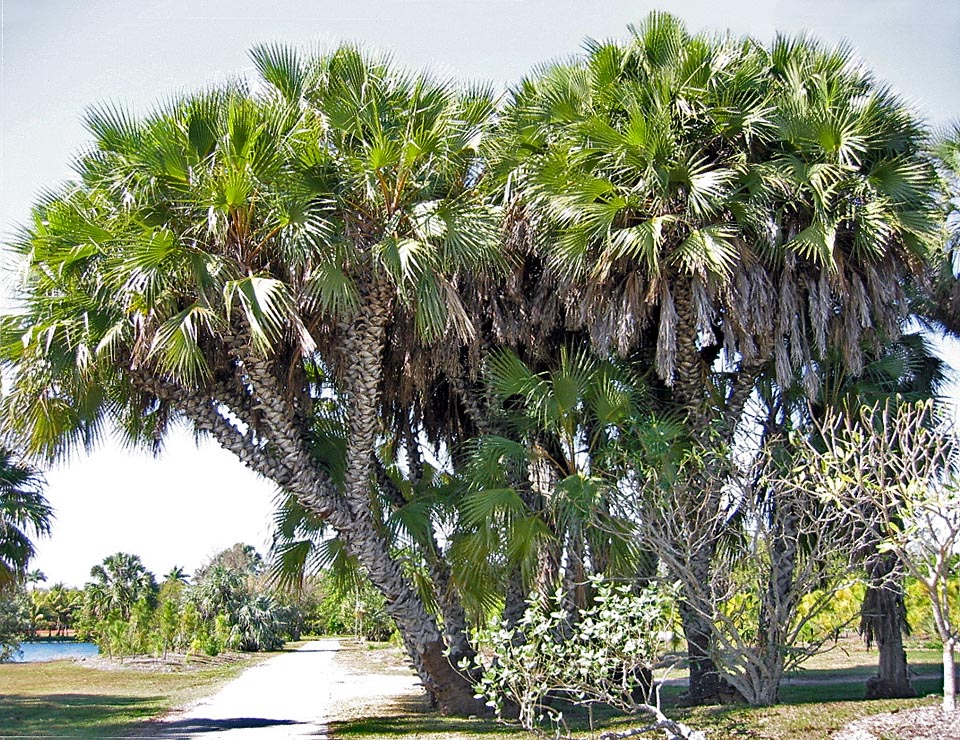 The Hyphaene compressa is a very variable dioecious species reaching the 20 m of height with ramified stems, showy monuments of the nature when standing isolated in the savannahs of East Africa, where lives in open areas, seasonally flooded or arid if there is water underground from which can tap into with its deep rooting apparatus © Giuseppe Mazza

Male and female inflorescences similar on different individuals, between the leaves (interfoliar), 1-1,5 m long, with ramifications of second order, the male ones with 1-6 rachillae at the apex of the primary ramifications, the female, usually more robust, with 1, less frequently 2-3 rachillae. Male flowers arranged sunken on the rachillae in groups of 3, opening in succession, with 6 stamina, solitary female flowers, on short hairy pedicel, with tri-carpellate gynaeceum. The fruits, usually developing from one only carpel, have very variable shape even if on the same infructescence, from almost oblong to pyriform, 7-12 cm long and 5-8 cm broad, of dark orange to pale brown colour, containing one ovoid seed 3,5 cm long and of 3 cm of diameter.

It usually reproduces by seed, that doesn’t have a long time of germinability, usually placed directly on the soil or in container at least 50 cm deep, seen that the hypocotyl developing from the seed, and on whose extremity stands the embryo from which the plant will originate, reaches this depth or little more. The loam, preferably sandy, is to be kept humid at the temperature of 28-30 °C. The percentage of germination is usually low and the times are quite long, from several months to more than one year, unless to pretreat the seeds, cleaned from the pulp, keeping them in water, renewed daily for a ten of days, or submitting them to an appropriate chemical treatment, reserved to a specialized personnel, for denting the hard tegument; the pretreated seeds germinate, in the best conditions of cultivation, starting from 4 months.

Adult ramified specimens that stand up isolated in the savannahs are real monuments of the nature, its ideal collocation, as ornamental plant, is hence in large gardens, far from other tall vegetation, in order to be fully appreciated, the only drawback is the slowness of growth, as it begins to ramify after several years. 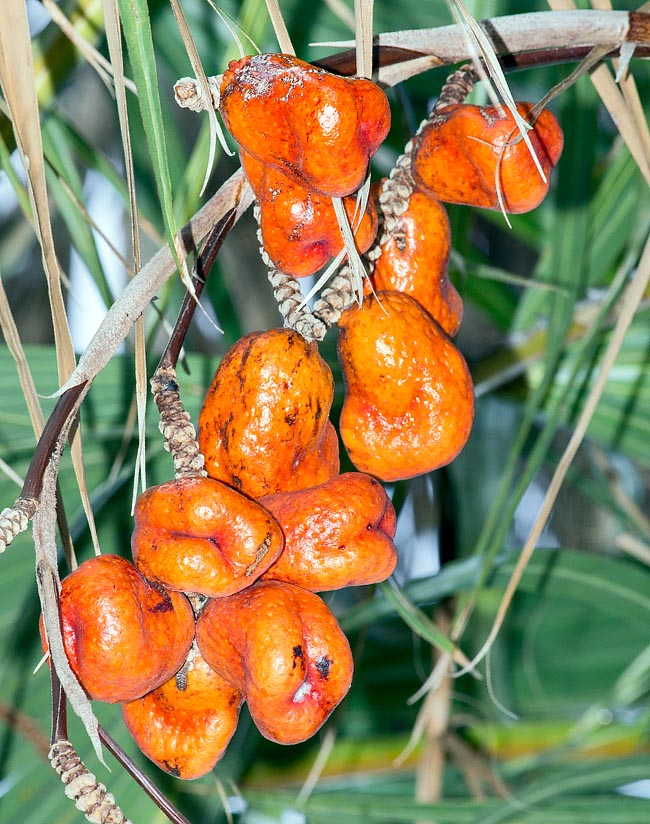 The pulp of its fruits is edible, energetic and of nice taste. Very fibrous if consumed raw, is an important food source for the fauna, in particular baboons and elephants, who contribute to the dispersion of the seeds © Giuseppe Mazza

Cultivable in the tropical and subtropical climate zones, humid as well semi-arid, in full sun, also during the initial phases of growth, it adapts to an ample variety of soils, even poor and moderately saline soils, with preference to the deep ones, draining, sandy and calcareous, but also to the acidic and neutral ones. It bears long periods of drought, if it can reach the underground aquifer, as well as the seasonal floodings.

Amply diffused in eastern Africa, has had and continues to have a fundamental role in the life of the local populations. The non-ramified stems due to their resistance and duration are variously utilized in the constructions, with the leaves and the petioles are done the typical traditional circular domed dwellings, but duly intertwined also the most modern rectangular ones.

The leaves, duly worked, are furthermore employed for fabricating a crowd of everyday objects, also artistic, that feed a small trade. The robust petioles of the dried leaves are utilized for fences and for realizing furniture of various type. The pulp of the fruits is edible, energetic and of pleasant taste, even if much fibrous, consumed raw, whilst from that of the unripe fruits they get a pleasant beverage, also the unripe endosperm is edible, whilst the ripe one is too hard and is at times utilized for realizing small handicrafts and artistic objects as vegetal ivory.

The leaves, fresh and also dry, are utilized like fodder, especially during the periods of drought. From the stems, by means of an incision, they obtain the lymph from which they get an alcoholic drink, practice that often leads the plant to the death or of the stem in the cespitous ones. The fruits are also an important food resource for the fauna, in particular baboons and elephants, that contribute to the dispersion of the seeds, that easily do germinate, if the conditions of the soil are favorable, after having passed through their digestive system.