The species is native to central-southern Africa (Angola, Botswana, Burundi, Democratic Republic of the Congo, Malawi, Mozambique, Namibia, Northern South Africa, Tanzania, Zambia and Zimbabwe) where it lives in the savannahs and thickets, along the rivers and lakes banks, at the margins of swampy zones and wherever there’s availability of water underground that it may reach with its rooting apparatus, from the sea level up to about 1300 m of altitude mostly on saline-sodic soils of alluvial nature.

The name of the genus comes from the Greek term “ὑφαίνω” (hyphaino) = to weave, to twine, with possible reference to the interweaving of fibres in the pulp of the fruit; the species is honoured to the German explorer and naturalist Wilhelm Peters (1815-1883).

The Hyphaene petersiana Klotzsch ex Mart. (1845) is a very variable dioecious species, solitary, only occasionally cespitous, with erect stems, up to about 15 m long, and 35 cm of diameter, at times with a slight swelling in the median part, rarely ramified, of grey colur and fissured vertically. The leaves are costapalmate, 1,5-2 m long and about 1,3 m broad, divided in 35-40 linear-lanceolate segments with acuminate apex just bifid, united at the base for less than half of their length, of green-grey to bluish green colour. 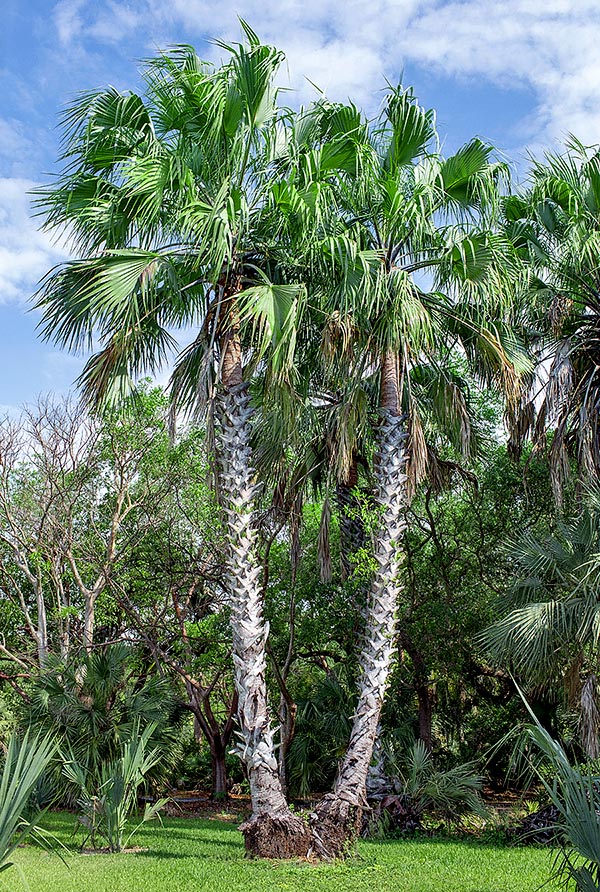 The Hyphaene petersiana is a dioecious species very variable and solitary, only occasionally cespitous, with erect stems that reach the 15 m. Little cultivated, it is native to central-southern Africa © Giuseppe Mazza

The petiole, 1-1,5 m long and about 5 cm broad, covered by tiny brown scales and a waxy patina, is provided on the margins of robust blackish spines bent upwards; the foliar bases, fissured longitudinally in correspondence to the petiole per a length of about 20 cm, remain long time on the plant forming a typical crossed interweaving.

Male and female inflorescences on different individuals, between the leaves (interfoliar), with ramifications of second order, the male arcuate, 1-2 m long, with 10-13 rachillae, up to 40 cm long, arranged in a semicircle at the apex of the primary ramifications, and flowers arranged sunken on the rachillae in groups of 3, opening in succession, with 6 stamina. Female inflorescences arcuate, then drooping in fruit, 1-1,2 m long, with one, rarely 2-3, rachillae at the apex of the primary ramifications, up to 35 cm long, and solitary flowers, on a short hairy pedicel, with tri-carpellate gynaeceum. The fruits, that usually develop from one only carpel, are of very variable shape even in the same infructescence, ovoid, obovoid or globose, 5-7 cm long and broad, of reddish brown to dark brown colour, glossy, containing one ovoid seed 3-3,5 cm long and broad.

It usually reproduces by seed, usually placed directly into the soil, less frequently in at least 50 cm deep containers, seen that the hypocotyl that develops from the seed, and on whose extremity stands the embryo from which will originate the plant, goes up to this depth or little more; the hypocotyl is particularly frail, hence much care is needed during the phase of germination. Also the next transfer from the container to the open land is to be done carefully and when the plant has sufficiently grown and has produced a good rooting apparatus. The loam, preferably sandy, is to be kept at the temperature of 28-30 °C. The percentage of germination is usually low, and the times are fairly long, unless of not pre treating the seeds, cleaned of their pulp, keeping them in water, renewed daily for about ten days, in order to affect the hard tegument; the pretreated seeds germinate, in the best conditions of cultivation, starting from 4 months. In nature the germination is accelerated and facilitated by the fires, that often develop in the savannahs, and by the passage in the digesting apparatus of the animals that eat them.

Rare out from the origin zones, despite the elegance and the beauty of the foliage, especially in the specimens with shades of more intense blue. Slow growing, is cultivable in the tropical, subtropical climates and marginally milder warm temperate zones, where it can bear temperatures little under the 0 °C, but an even slower growth. It requires full sun, also in the initial growth phases, and adapts to an ample choice of soils, even poor and saline ones, with preference to the deep ones, draining and sandy. In nature it bears long periods of drought, as it can reach the underground aquifer, in cultivation is to be regularly irrigated in the climates characterized by long warm and dry summers for a faster growth and a more luxuriant look.

Amply diffused in a vast area of central-southern Africa, has since ever an important rôle in the life of the local populations. The stems are utilized in the constructions, the dried leaves as cover for the dwellings and the petioles in the fences. From the young leaves not yet open, with an appropriate procedure, are obtained robust fibres employed to fabricate a quantity of everyday handicrafts, but also artistic, that is possible to find in the local markets; unluckily an excessive and repeated collection of the leaves, as it occurs in some locations, leads to a progressive deterioration of the plant until its death. The species is the most important source of a low-alcohol beverage much appreciated and looked for in the whole origin area, at times distilled for a greater alcohol content, gotten incising the vegetative apex, usually in young plants, and collecting the lymph coming out; the operation of incising is to be repeated daily for various weeks to maintain constant the flow till when this does not end, also this operation causes the death of the plant. 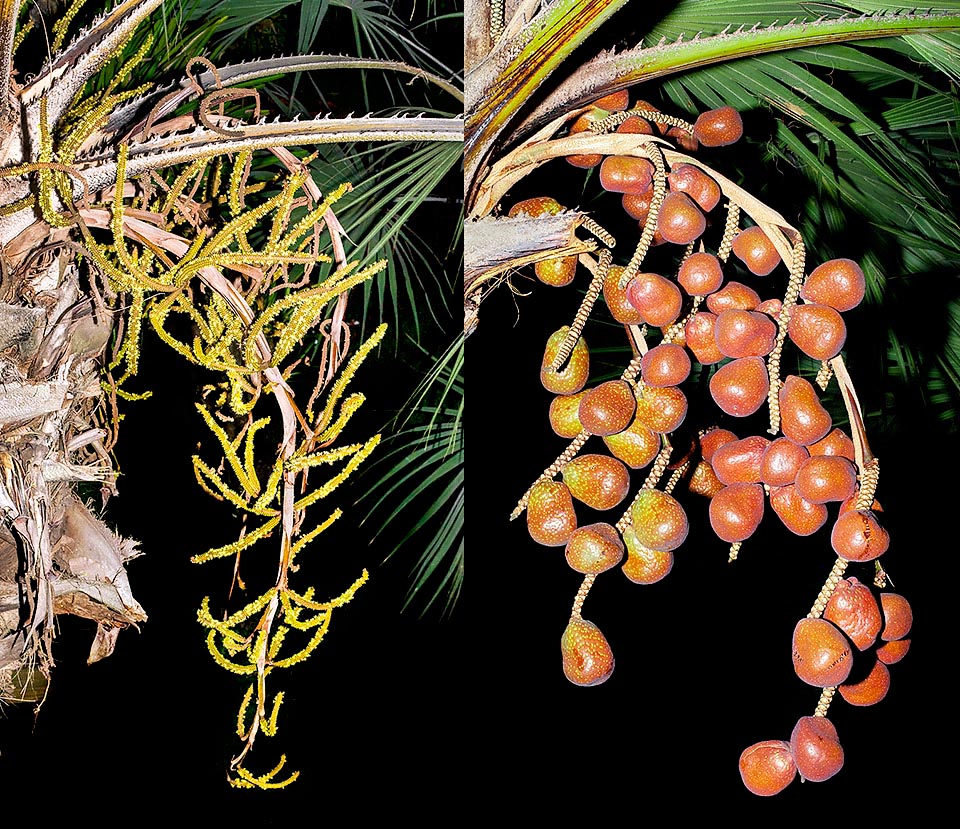 Male inflorescence, with up to 40 cm long rachillae arranged in a semicircle at the apex of the 1-2 m primary ramifications, and ovoid, obovoid or globose fruits of 5-7 cm. They are edible but fibrous, utilized also, as the lymph, for alcoholic beverages. This last practice, like that of the “hearts of palm” however causes the death of the plant © Giuseppe Mazza

Due to the increase of the population and consequent bigger requirement of the leaves as well as of the beverage, the presence of the species in nature has significantly reduced, so much to induce the local authorities to take actions in order to rule its exploitation. Also the use of the vegetative apices (“hearts of palm”) and of the young buds as vegetables is discouraged and even forbidden in some countries.

The pulp of the fruits, of yellow-orange colour and aromatic, is edible, energetic, but very fibrous, is consumed raw or fermented and distilled to get an alcoholic drink, also the unripe endosperm, liquid, is edible, of pleasant taste, whilst from the ripe one, particularly hard, they get small handicrafts and artistic such as vegetable ivory. The young leaves and the fruits are used as food for the domestic animals, in particular in the drought periods when other sources of food are lacking, but represent also an important food resource for the fauna, in particular baboons and elephants, that contribute to the dispersion of the seeds