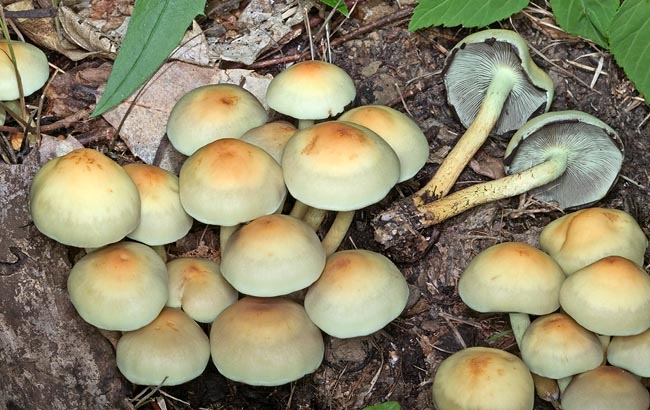 Quite common, Hypholoma fasciculare is toxic with gastro-enteric and laxative effects © Giuseppe Mazza

The name comes from the Latin “fasciculare” = tuft, which comes out in tufts, relevant to the fascicles.

This species, even if not edible, boasts some common names, probably for separating t from those edible entities.

To the genus Hypholoma are ascribed fungi having homogenous structure, the universal veil is absent and the partial one is present or absent; if present, it is then visible at margins of the cap in the forms of appendiculate remnants, or of fibrillose ring on the stem. Mainly convex, dry cap; adnate, uncinate gills; fibrous, whitish, yellowish flesh; sour or mild taste. To the section Hypholoma are ascribed those fungi growing on dead wood or roots, in crowded clusters, at times even rather big. 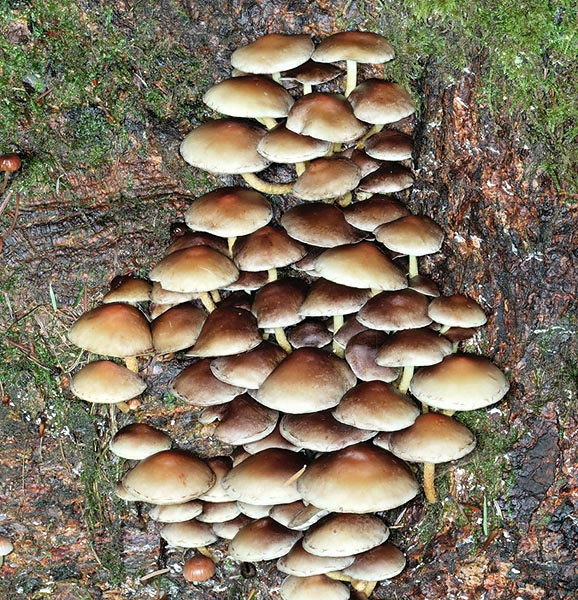 Cap: 3-7 cm, initially hemispheric, then convex and finally flat-convex, at times with little prominent umbo; the margin is for much time inrolled, then straight or even curved, sinuous, appendiculate when young. Smooth cuticle, glabrous, opacous, of bright sulphur yellow colour, reddish at the centre, at times greenish towards the margin.

Hymenium: Thick gills, narrow, thin, intercalated by lamellulas; the colour is initially sulphur yellow, then olivaster, greenish, finally brown due to the ripening of the spores.

Stem: 4-9 x 0,4-0,8 cm, slender, cylindrical, arcuate, tapered below, fascicular at the base with other stems, full, then hollow. Smooth surface, of sulphur yellow colour, crossed by thin longitudinal fibrils, the base is brown-reddish when ripe; the annular zone presents cortiniform remnants.

Flesh: Rather exiguous, tender, frail, fibrous in the stem, of yellow colour, brownish at the base of the stem. The smell is almost insignificant, unpleasant; the taste is sour, astringent.

Habitat: It grows in summer and in late autumn on old stumps, on dead branches, of broad-leaved trees as well as of conifers, fasciculate at the base, usually in several specimens.

Edibility: Toxic, it causes poisoning of gastro-enteric and laxative type.

Remarks: Possible mistakes can occur with the Hypholoma sublateritium (Fr.) Quélet, but this one has red-brick cap and paler gills, and the Hypholoma capnoides (Fries : Fries) P. Kummer, which has, however, the cap with warmer colours, from the pale ochre-red to the yellowish, the gills are grey-brownish without shades of green.

Another possible confusion may arise with yellowish specimens of Armillaria mellea (Vahl : Fries) P. Kummer, which, however, has an evident ring and non-sour flesh; these two character, along with the gills colour, grant us an easy separation from the Hypholoma fasciculare.