The Nymphalids (Nymphalidae), huge family of nocturnal lepidopters, that is afferent to the group of the Rhopalocers (Rhopalocera), are butterflies having a remarkable elegance and warm and substantial colours, whose local members stand among the most multi-coloured Italian butterflies.

This family is composed by numerous genera and many species, in the order of thousands; for the genera, limiting us to the most strictly European and Italian ones, we cite the: Nymphalis, Vanessa, Inachis, Aglais, Polygonia, Argynnis and Limenitis. The butterflies of the genus Vanessa, are, among those afferent to the family of the nymphalids, the most specifically and densely present in our territory. Though the genus Vanessa is still now present, the taxonomical biologists have moved some species of this genus to other genera, even if keeping the common name of vanessa.

A typical example is the species object of this text, the Vanessa Io, or European peacock (Inachis io Linnaeus, 1758), that, as we can see from the binomial nomenclature, is afferent now to the genus Inachis.  Some species of this family of splendid butterflies, whose livery competes in fact of beauty with that of the Papilionids, are rightly the Vanessa Io or European Peacock (Inachis io), the Blackleg tortoiseshell (Nymphalis polychloros), one of the most colourful of the family, the Red admiral (Vanessa atalanta), the Camberwell beauty (Nymphalis antiopa), the Small tortoiseshell (Aglais urticae) and the Painted lady (Vanessa cardui). Another species, commonly called Vanessa, but afferent to the genus Polygonia, even if much different from the aforementioned species, is the Comma (Polygonia c-album), which has the edges of the wings exceptionally jagged and a white spot, curved in a “C” shape, on the lower side of the hind wings, after which the species is named.

Then, to the Nymphalidae, as family, do belong all the species relevant to the other previously cited genera, whose list is limited only to those more commonly present in Europe and Italy, without considering all the tropical and subtropical exotic species; we remind that the species forming this family are thousands. 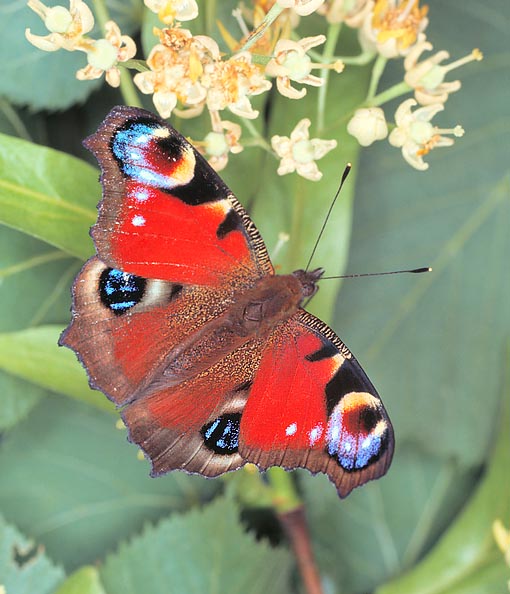 The Vanessa Io or European Peacock (Inachis io) is cosmopolitan, like the other species of nymphalids. It is found everywhere in the temperate areas, but the poles, even if it has been sighted up to the circum-polar belts.

The adults of European Peacock, as well as the other species afferent to the order of the nymphalids, live sucking the nectar from the flowers (in realty, this applies for all the diurnal lepidopters) and these butterflies may be identified in the most disparate habitats and biotopes. The nymphalids, and therefore also the Vanessa Io, are very common in the plains up to very high altitudes, also at 4.000 m above the sea level.

The general lines of the members of the family of the nymphalids have long and thin antennae, with a well pronounced apical club and fairly ample wings of various shapes, with edge at times entire, at times more or less indented and in some cases deeply fringed, as is the case of the Comma (Polygonia c-album).

Peculiar characteristic in all the members of the nymphalids are the fore legs, endowed of a very thick dense hair and utilized by the insect mainly for cleaning up the antennae. The colours of the wings are always showy and usually placed in way to form drawings of a rare beauty.

In the specific of the Vanessa Io, name of mythological origin (as a matter of fact, in the mythology of the ancient Greece, “Io” was a much beautiful priestess of Hera, of whom Zeus did fell in love), even if it is the most common among our local species, of the genus Inachis, is perhaps the most beautiful, thanks to the presence of very showy and graceful ocellated spots, similar to the ocelli present on the tail of the male peacock (from which comes one of the common names), placed towards the upper corner of each single wing and therefore in a total of four.

In contrast to the charming grace of the adult, stands the poorly elegant, even ugly, of the caterpillar, which nourishes of nettles and has an intense black tint, interrupted by very small and numerous white spots.

The reproductive characteristics are common to all the members of the nymphalids, and therefore also to the Vanessa Io.

These lepidopters lay their eggs on different types of plants, herbaceous as well as arborescent; the caterpillars, which eat leaves, have a generally uniform, or almost, colouration and are adorned with several hairy appendages; as we have seen, in the Vanessa Io it is black, with presence of white small spots. Quite typical are the chrysalis which remain hanging to the plants by means of a peduncle and are usually decorated by several golden spots; it is rightly from the golden spots of the nymphs of these butterflies, that has come, from the ancient Greek “chrysos”, meaning gold, the term of chrysalis, utilized univocally for indicating the nymphs of all the lepidopters.

Also the shape of the body of the nymph is special, keeled with several dentils and tubercles and is fairly constant as shape among the chrysalis of the members of this family, Vanessa Io included.

In Italy, the Inachis io caterpillars are noted, as briefly said before, in May-June on the leaves of nettle and the butterfly, active from July to September, begins the hibernation with the first cold.