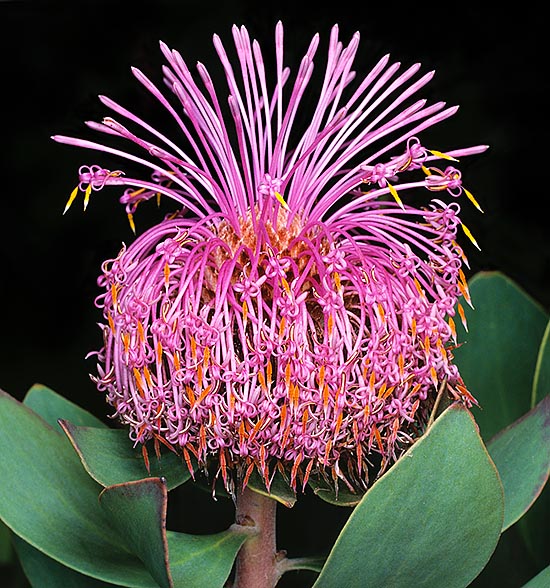 The species is native to south-western Australia where it grows on the high slopes of the Stirling Mountains on sandy and stony soils.

The Isopogon latifolius R.Br. (1830) is a very ramified evergreen erect shrub, up to about 2,5 m tall, even if in cultivation it is kept lower, with reddish branches and leaves, on short petiole, spirally placed, simple, coriaceous, flat, elliptic to obovate with apex equipped with a small callous point, 6-10 cm long and 2-4 cm broad, of pale green colour.

Globose terminal inflorescences, subtended by an involucre of short imbricate bracts, of about 8 cm of diameter, formed by a crowd of tubular flowers of mauve red colour, curved, up to about 4 cm long, with 4 linear lobes, about 0,6 cm long, provided with a small tuft of silky hairs at the apex.

The fruits are globose and remain long time on the plant. It does not resist to the fire, having no lignotuber, the upper part of the root, enlarged and lignified, which allows the plant to regenerate after a fire, its survival is therefore linked to the seeds whose germination is favoured by such circumstance.

It reproduces by seed, without any particular pre-treatment, in particularly draining sandy loam, kept humid, at a temperature of 18-20 °C, and by cutting, but with low percentages of rooting. It is the most ornamental species of the genus Isopogon, cultivable successfully in full sun in zones with Mediterranean type climate, with mild and moderately rainy winters and warm and dry summers, does not adapt to live in climates with humid summers where it may be subject to rottenness.

It requires perfectly draining soils, acidic, sandy or stony, adult plants can stand sporadic lowest values of temperature up to about -4 °C and long periods of drought. Suitable to rocky gardens as isolated specimen or in mass, prunings are useful, to be done after the blooming, for getting a compact and well tufted habit.

It also adapts to the cultivation in pot, in substrata having the aforementioned characteristics, with moderate waterings in winter, less frequent in summer, allowing the substratum to well dry up before giving water again. Long-lasting flowers on the plant as well as cut, therefore suitable for being utilized in the floral compositions and for such purpose the plant is cultivated in Australia as well as in other countries having a Mediterranean type climate.