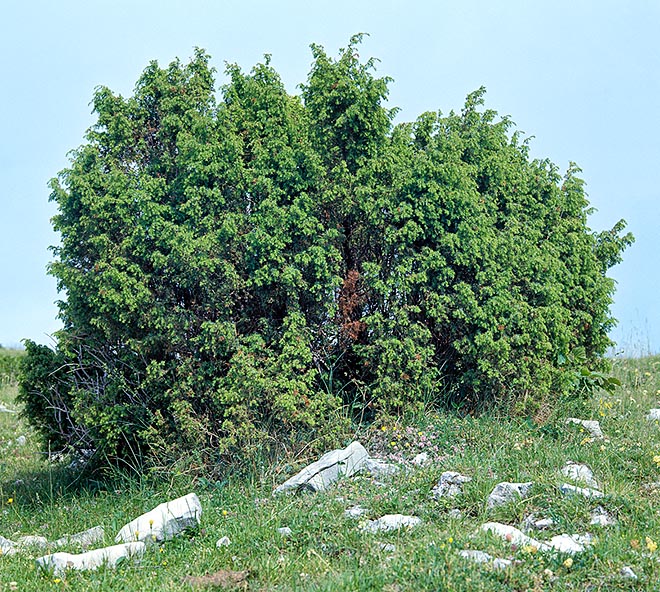 The Common juniper (Juniperus communis) loves the sun and is frequent in the pastures up to 1500 m of altitude. It colonizes the poor soils, favoured by the grazing as avoided by cattle. Usually is a bush or a small 1-3 m tall tree, but in Sardinia a millennial specimen reaches 10 m with a trunk of 2,40 m of diameter at the base © Giuseppe Mazza

The genus Juniperus hosts monoecious or dioecious trees and shrubs, with needle-like or scale-like leaves or with both forms arranged on the branches in verticils of three, or opposite. After various authors, the species vary from 50 to 67 and are largely present in the eastern Hemisphere: Europe, Acores, Canary Islands, Africa and Asia Minor, Central Asia (from Turkmenistan to western Himalaya), Far East; and in the western Hemisphere (North America, Guatemala and Caribbean).

It includes several species of tall trees, up to 20-40 metres of height (like, for instance, the Juniperus procera of Ethiopia) and low shrubs with drooping branches.

The genus (very old, dating back to 350 million of years ago) is now divided in three sections: Section Caryocedrus with the only species Juniperus drupacea of eastern Mediterranean, Section Oxycedrus including the species with patent and pungent needle-like leaves, such as Juniperus oxycedrus, and Section Sabina similar to the cypresses with patent needles only when young and then with small branches having squamiform leaves, such as Juniperus sabina.

The name of the genus seems to come from a Celtic word, “jeneprus” = rough, harsh, due to the prickly leaves, after others from the Lain names jùnix, heifer and pàrio = I deliver, I give birth. Actually, one of the species of juniper, the Juniperus sabina, was administered in the old times to the primiparous cows in order to help the delivery. The meaning of the name of the species stands for much diffused, common.

The Common juniper (Juniperus communis L. 1753) is a bush or a dioecious little tree from 1 to 3 m tall (exceptionally up to 12-15 m), at times low spreading, much ramified since from the base, with trigonal branches, reddish brown, ascending to erect, or patent, the smaller ones thin and often drooping.

Grey-reddish to red-brown bark, peeling with the age in thin longitudinal small bands undulated on the edges. Hard and compact wood, differentiated, with reduced whitish or yellowish laburnum and brown-violaceous duramen, with fine-grained and aromatic, of medium hardness (620 kg/m2), resinous and perfumed but difficult to work because very twisted seen the irregular shape of the stems; due to the small size it finds employment in cabinetry where it is very much appreciated. Moreover, it is excellent firewood, also for cooking on the grill and for smoking fish, charcuterie and salted meat.

The rooting system is relatively superficial but robust. The branches have evergreen leaves, patent, linear, needle-like and pungent, in verticils of three, the adult ones of 1-1,5 x 15-17 mm, glaucous dark green, upper face almost flat with a stomatal stria, whitish above. 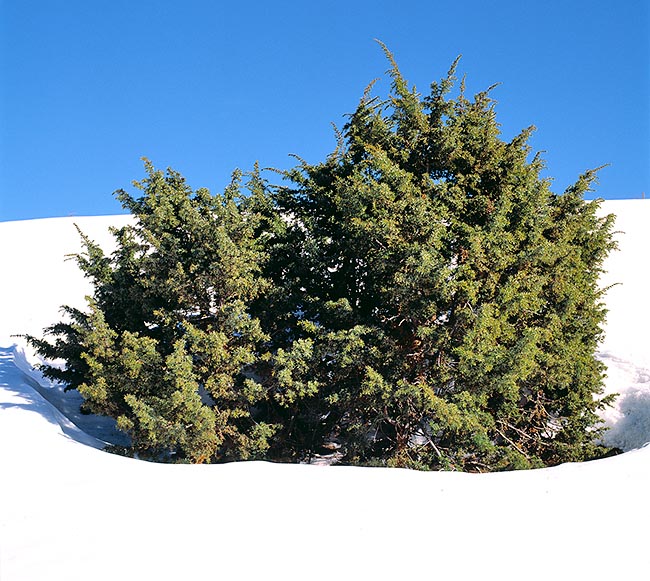 Evergreen, has prickly leaves presenting a white stripe of stomas on the upper page © Giuseppe Mazza

The reproductive period occurs from February to April; the female plants have 6-9 mm green cones, the male ones, yellow, almost spherical (2-3 mm), both carried at the axil of the leaves; the pollination is done by the wind.

Instead of carrying the “classical” strobili, the junipers produce fleshy pseudo-fruits (galbuli or berries), ovoid, indehiscent, aromatic, of (2) 4-5 (8) mm, formed by three fertile scales each one carrying one ovule, welded together, shortly pedunculate, containing one to three trigonal-convex seeds, hard, of pale brown colour.

The berries take two (three) years for ripening, initially they are green, then pruinose and when ripe they get a bluish-violet colour, glaucescent because covered by a thin patina of pruine; they are much appreciated by numerous species of birds, especially passerines and galliforms, who provide to their dissemination.

Juniperus communis has a circumboreal distribution (cold and temperate-cold zones of Europe, Asia and North America), it grows in the pastures and in the arid woods, in the uncultivated spaces and in the thickets from the plain, colonizes the abandoned fields especially on the calcareous or clayey soils, up to 1500 metres of altitude. Some species of the genus Juniperus, like the Juniperus scopulorum of the Long Canyon, Utah, are true patriarchs as it seems that they have reached and passed the 3000 years of age! In Sardinia, at Villasimius lives a 10 m tall common juniper having a trunk with a circumference of 2,40 m! From the Juniperus communis have been selected various ornamental garden varieties with columnar posture, like the ‘Hibernica’ and the ‘Compressa’, or with prostrate cushion-like form, such as the ‘Depressa aurea’, with its golden foliage.

The juniper is a heliphilous, xerophilous, rather thermophilous, pioneer species, of slow growth and of much variable look (often the male plants have fastigiated top and the female ones an enlarged one); it adapts to any terrain texture, colonizes the poor soils and is favoured by the grazing as avoided by the cattle. It tends to disappear with the arrival of the wood because badly bears the shading. There are two species (or subspecies, after some authors) similar to Juniperus communis: the Dwarf juniperus (Juniperus nana or rather Juniperus alpina), small ground hugging shrub, living between the 1500 and the 2500 m of altitude in the sub-Alpine and Alpine heathlands) and the Hemispheric juniper (Juniperus hemisphaerica), also hugged to the soil, living in the south-eastern European mountains (summit habitats, windy ridges between the 1500 and the 2300 m of altitude).

The junipers can propagate by layering and cutting; the multiplication by seed is difficult as it needs some operations such as the collection of not too ripe galbuli, removal of the pulp by maceration and washing of the seeds, followed by a further washing with diluted sodium hydroxide (lye) to remove the waxy film covering them, cold stratification and sowing in autumn. 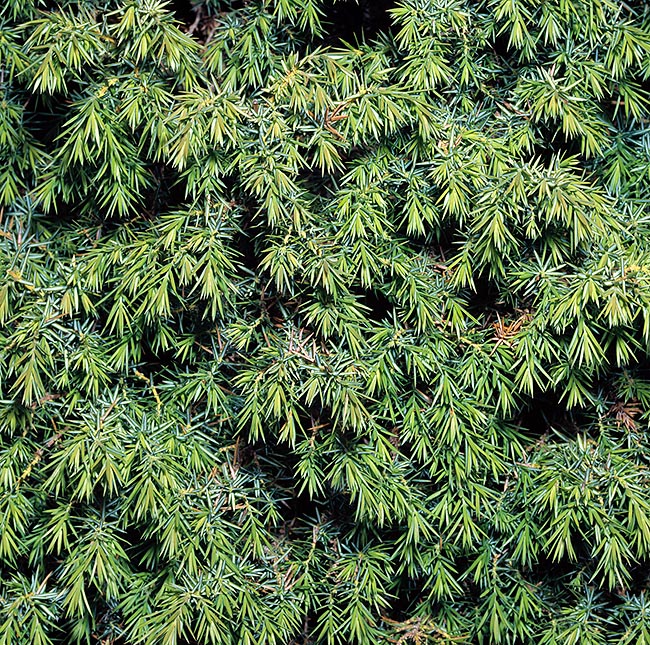 In phytotherapy, they employ the essential oil and the dried wood of branches, stem and roots © Giuseppe Mazza

The most important production zones (for foodstuffs, integrators, herbs, liquors, cosmetics, drugs and animal foods) are the Apennine areas of Italy and the Balkans.

In cooking, the berries of junipers, with their warm and resinous aroma, are used for aromatizing the game, the porketta, the hams, the stews, the fish, the pâté, the sausages, the fillings, etc., and well combine with pickled vegetables and the cabbages (sauerkrauts).

In the days of yore the juniper was much used in the propitiatory rituals, as prophylaxis in the cases of epidemics and insect infestations and numerous are the legends surrounding it, like its supposed capacity to keep away the demons, the witches, the serpents, etc. The branches were hung inside the houses because, they said, the witches might have fun in counting their needle-like leaves but always would lose the count and therefore, soon, upset, did fly away…

The collection of the galbuli (Iuniperi pseudofructus Ph. Eur.) is done from late summer to early autumn with the hands covered by robust gloves for small quantities, or by means of beating the branches, previous positioning of a net under the plants; then they are dried up quickly in dry and ventilated locations in order to avoid the formation of mould.

In phytotherapy, they employ also the essential oil (containing mainly terpinen-4-ol, pinene, myrcene, sabinene and other monoterpens, tannins and invert sugar), and the dried wood of branches, stem and roots.

The juniper has balsamic, diuretic, urinary antiseptic and anti-uricemic, eupeptic, carminative, antioxidant, anti-fermentative, hypoglycaemic, bitter-tonic, diaphoretic properties. It is used in the respiratory ailments, in the uricemic and rheumatic conditions, in the digestive problems with heartburn, regurgitation, sense of fullness; for external use as revulsive and repellent for the insects.

The essential oil is not to be taken in case of kidney diseases, during pregnancy and during lactation; in any case it is suggested to avoid the overdosing also in the consumption of berries. 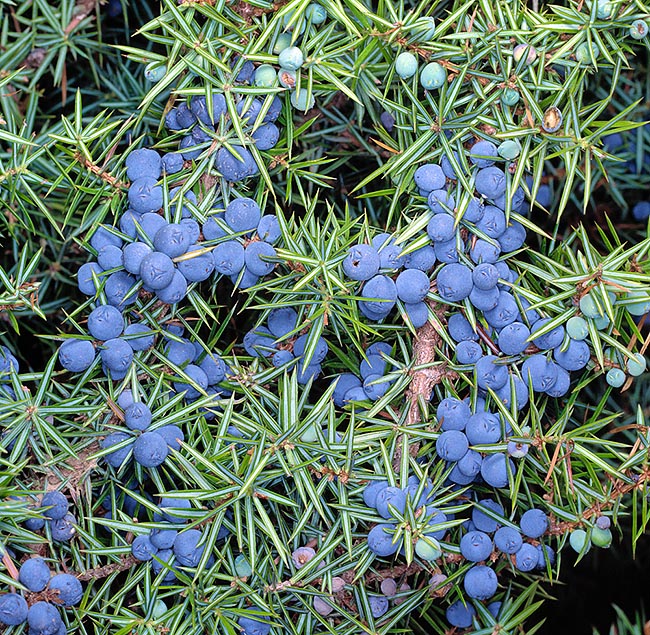 The female cones are formed by small fleshy scales merged while growing to create pseudo-fruits similar to berries. They take 2-3 years to ripe: initially they are green, then pruinose and finally they assume a showy bluish-violet colour attracting the attention of the birds. Precious in cuisine and for medicinal virtues © Giuseppe Mazza

For anyone who has the problem of halitosis it is suggested to chew some galbuli for some minutes.

The therapeutic use of the juniper confers the urines a characteristic violet colouration.

Diuretic, balsamic and antiseptic infusion, useful also in leukorrhea and in the blennorrhoea

One spoon of crushed galbuli in half a litre of boiling water. Leave in infusion for fifteen minutes, sweeten with honey and consume in three times during the day far away from meals.

One handful of crushed berries in a litre of sweet white wine of good gradation (such as the Straw wine or Malvasia), leave macerating for about ten days, filter and administer in the dose of one short per day in case of asthmatic accesses.

Anti-inflammatory fumigation for pharyngitis, laryngitis and loss of voice

A handful of crushed berries in one litre of boiling water, breathe vapours for a long time covering the head with a towel. From two to three applications per day up to benefit.