The Savin juniper, Savin, Magicians cypress or simply Sabina (Juniperus sabina L 1753) is an evergreen shrub, belonging to the family of the Cupressaceae, with circumboreal distribution, present in the cold-temperate zones in Europe and in western Asia, less frequent in North America. Loves the sunny slopes, the very sparse woods and the rocky habitats from the 1000 to the 2500 m of altitude.

The name of the genus Juniperus is the name with which the Romans indicated the juniper and is of uncertain origin: maybe it comes from the Latin “iunix” (heifer) and “pario” (I give birth), in relation to the fact that the savin juniper was administered to the cows for inducing the delivery. After others, ir should come from the Celtic “gen” (shrub) and “prus” (rough), due to its prickly leaves. Moreover, the Greeks called the juniper αρκευθος (arkeuthos), from the verb αρκεω (arkeo) = to turn away, to reject, referring to the prickly leaves.

The specific name sabina refers to its presence in Sabina, Latium region between Rome and Rieti. 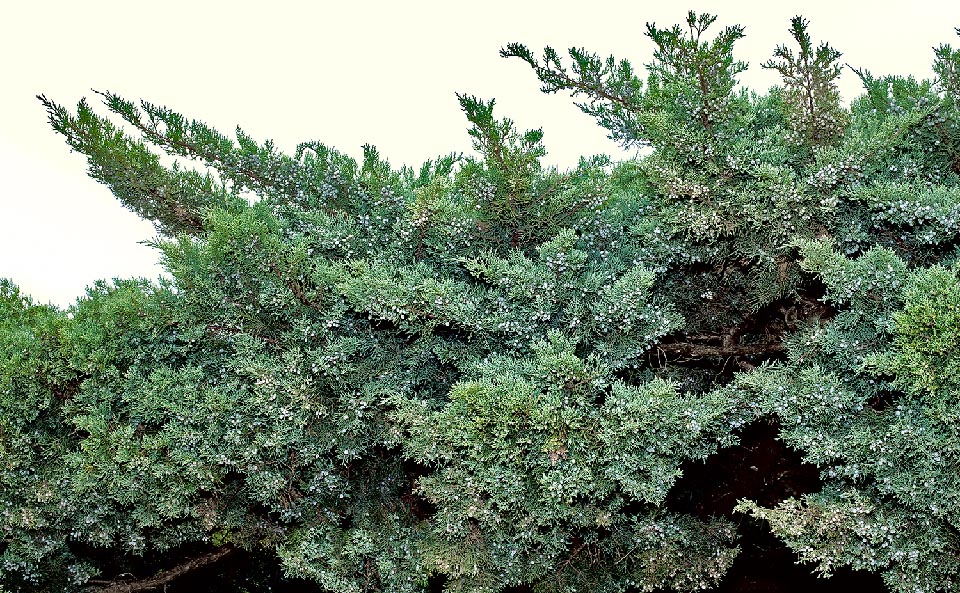 Juniperus sabina is an evergreen 1-1,5 m tall shrub with very ramose and prostrate posture. With circumboreal distribution, loves sunny slopes, very sparse woods and the rocky habitats from 1000 m to 2500 m of altitude. All parts of the plant are very poisonous for animals and for the man © Giuseppe Mazza

Usually, in Italy the savin juniper does not exceed the 1-1,5 m of height with very ramose and prostrate posture, more rarely erect and strong odour of resin. The foliage is of irregular shape, dark green. The stem ramifies already close to the ground producing often twisted and crawling branches, much subdivided, characterized by brown reddish fraying or shedding bark.The young small branches are reddish or green, thin and flexible.

The juvenile leaves are needle-like, very acute, of 4-6 mm, the adult ones are usually shaped like a scale, 1-3 mm long, opposite, very adherent to the branch, green outside and glaucous inside. At times also in the adult branches are present leaves with juvenile characteristics. Every leave is furnished at the base of the outer face of a big gland and all the green parts, when rubbed, emit a pungent and characteristic smell. The leaves in the low part of the branches are strictly imbricate, whilst towards the extremity of the branches they are more spaced.

Usually it is a dioecious species, that is with distinct male and female individuals, even if more rarely it can be monoecious, with the same plant producing both sexes. In this case the reproductive male and female organs are carried by different small branches. 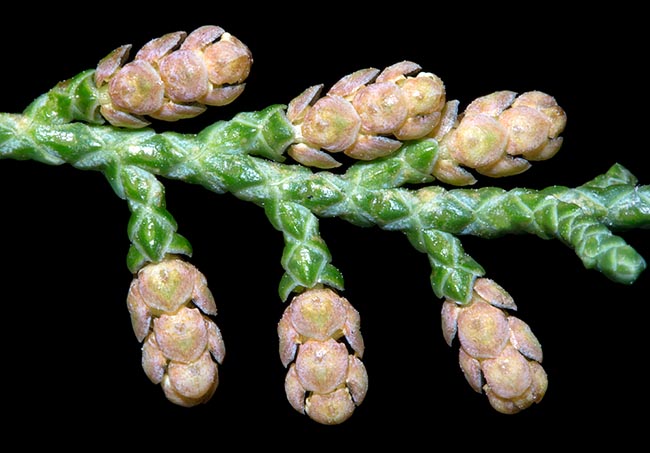 The male ones are 2-4 mm strobili, red-brown, rich of pollen sacs; the female ones are axillar, very small, brown yellow or reddish, carried by short peduncles. The fecundation usually takes place, depending on the climates, between April and June.
The fruits are pseudo-berries (berries or galbuli). They are sparse, with soft pulp, initially green, then brown and finally light blue and pruinose with a diametre of 4-6 mm and 2-4 yellowish seeds.

The roots are robust and able to creep into the cracks between the rocks.

The savin juniper, often cultivated in parks and gardens, can be easily reproduced by cuttings and by seeds.

The savin juniper hosts one of the development stages of the microscopic parasite fungus Gymnosporangium fuscum that affects the pear, causing the rust of the pear. For this reason its proximity to the pear cultivations is considered as a risk.

All parts of the plant are very poisonous for the anomals as well as for the man, due to the presence of various toxic substances and essential oils. For its toxicity, the plant, as a matter of fact, was in the past utilized for criminal purposes. Whatever therapeutic use must be avoided. The utilizations here reported have only an historical interest.

Dioscorides (first century AD) calls it brathu (βραθυ) and cites its external use for skin diseases, the abortifacient action and the dangerous effects on the kidney (when drunk with the wine makes urinating blood). The savin is mentioned as one of the most important plants in the old Roman rites. It was used in the funeral rituals as symbol of immortality, instead of incense. Ovid in the “Fasti” cites this practice (Ovid, Fasti. I,337): “ara dabat fumos herbis contenta sabinis”.The vulgar name of “magicians cypress” is due to the old use as amulet against spells.

The savin juniper was in the past used in the countries for favouring in the sheep the expulsion of the placenta (afterbirth) rightly after the delivery. 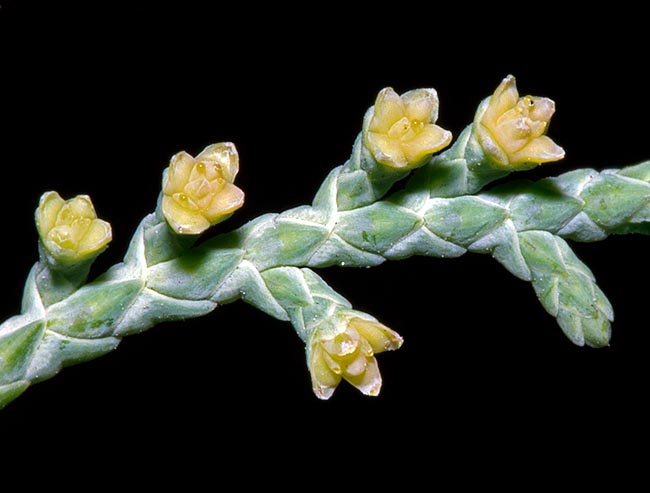 The female organs, very small and yellowish, await the pollen with viscous droplets for seizing it when passing © Giuseppe Mazza

One of the most used products in the past in the therapy was the savin oil, characterized by a pungent and unpleasant odour, that was obtained by distillating the leaves and the young branches of the plant. For external use, the oil was used when treating the warts, syphilitic ulcers and other skin ailments. For internal use it has been utilized as emmenagogue, that is for stimulating the menstrual flow, and as abortifacient, but often with very harmful of fatal results, due to its high toxicity. It was also considered valid against the gout and the rheumatisms, as haemostatic and vermifuge.

Despite the acknowledged toxicity, still by the end of the XIX century the physicians used the savin oil with various indications. In a medical treatise dated 1879 (Materia medica and Therapeutics, by Charles D. F. Phillips) we read: “The Savin oil is a powerful poison… produces gastrointestinal inflammation… its irritating action on the kidneys causes hematuria… There have been numerous cases of fatal poisoning following the administration of the oil to induce miscarriages… the deaths caused by this substance are much more frequent of what is usually believed…. The abortifacient effects are the outcome of a serious intoxication that puts lives at risk…” And then, paradoxically, concludes: “I consider the savin as one of the safest and most effective drugs, with the advantage of being able to be administered without any risk”.

The toxicity of the savin juniper applies also the cattle eating it, causing miscarriages or serious damages to the kidneys and to the digestive system. The study of the toxicity of extracts of Juniperus sabina on laboratory animals has shown a particular sensibility of the mothers during the pregnancy and a remarkable embryotoxic effect.

An important problem has been met in the artisanal production of liquors made from juniper. The gin production foresees the maceration of berries of juniper (Juniperus communis) in alcohol. In Spain have occurred cases where the collectors have mistaken the common juniper berries with those of the savin juniper with the result of even serious intoxications. 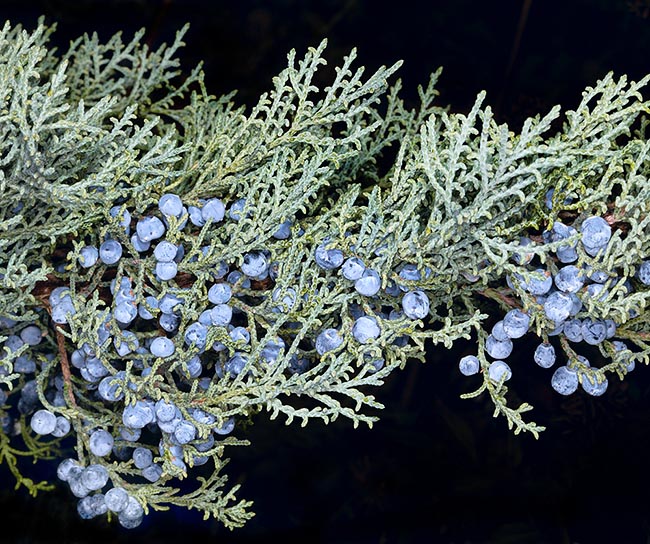 The toxic ation of the Juniperus sabina is mainly due to terpenes such as the sabinene, the sabinol, the sabinil acetate and to the podophyllotoxin. Also the crushed leaves have irritant and vesicant effect and, if ingested, causes irreversible injuries to the digestive and urinary systems, that may get to the renal necrosis. Even the pollen of the plant is toxic: for this reason is to be avoided the consumption of honey produced by bees foraging on it. On the other hand, the bees themselves may be get intoxicated by the pollen. The symptoms of the low dosage intoxication consist in irritation of the mouth, diarrhoea, vomit, colics. High doses cause serious poisoning, with tachycardia, breathing difficulties, cramps, paralysis, coma and death in the 50% of the cases. Due to the high toxicity, in many countries the sale of the oil has been forbidden.

Analogous toxic and abortifacient pro- perties are present in similar species, also those often cultivated in the gar- dens, such as Juniperus virginiana L. and Juniperus thurifera L.

Also the common juniper has toxic properties, albeit less toxic, that manifest in animals grazing the young shoots. In herbalism the drug (Sabinae ramuli) is formed by the terminal small branches, collected in April and May and dried up. They show, in these conditions, a pale green colour that turns yellow over time, smell of turpentine and have bitter burning taste.

The drug contains all the toxic principles, even if in lesser concentration than in the oil. In spite of this drug being inscribed in several pharmacopoeias, it is usually discouraged and of unsafe use because its emmenagogue action and, at higher dosage, abortifacient (and this is the use for which is criminally employed especially in the countries) is easily accompanied by dangerous metrorrhagias, hemorrhagic nephritis and by violent irritation of the digestive tract with burning to the mouth and the throat, vomit, abdominal pains, diarrhoea, that may worsen up to the bowel perforation and to peritonitis. The prognosis is serious because, in the fifty per cent of the cases death occurs within a time varying from few hours to some days and in conditions of complete unconsciousness. It is also utilized for external use in powder for the treatment of atonic ulcers, of seborrheic alopecia and also for the destruction of the condylomas. It is good, however, to insist on the dangers deriving from the use of this drug.

The dried wood parts of Juniperus sabina are often sophisticated with those of Juniperus phoenicea that has the same properties.