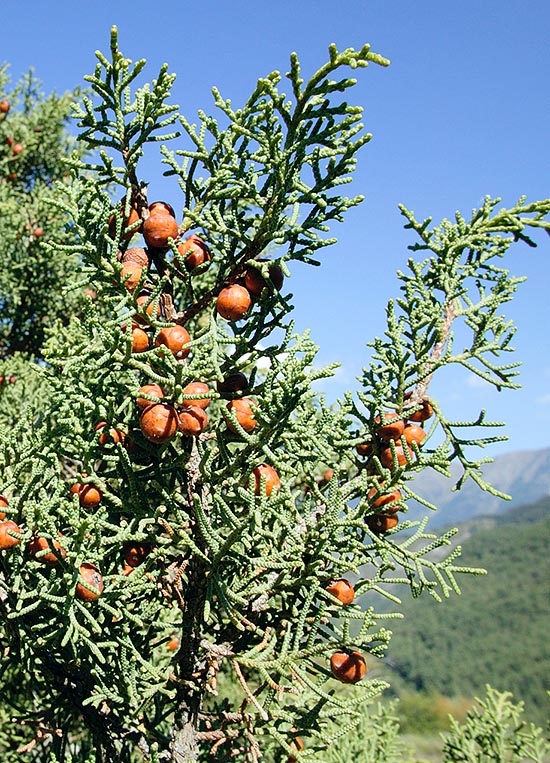 Juniperus phoenicea is a 3-8 m tall and much long-lived Euro-Mediterranean species © G. Mazza

After various authors, the genus Juniperus includes 50 to 67 species (8 of which spontaneous in Europe) of monoecious or dioecious trees and shrubs, with leaves opposite or in verticils of three, acerose or squamiform or with both forms.

Axillar or terminal cones that ripen in the first, second or third year, usually ovoid or globose. The species of this genus are amply distributed in the eastern hemisphere: Europe, Azores, Canary Islands, Asia Minor and Africa, Central Asia (from Turkmenistan up to western Himalaya, Far East (China, Japan, Korea, Sakhalin, Taiwan), and in the western hemisphere: North America, Mexico, Guatemala and in the Caribbean. It includes various species of tall trees, up to 20-40 metres of height (like, for instance, the Ethiopian Juniperus procera) and low shrubs with drooping branches.

After some authors the name of the genus should come from a Celtic word meaning rough, harsh, due to the prickly leaves and the sour taste of the galbuli, after others, from the Latin names “iùnix”, heifer and “pàrio”, I am delivering, because one of the species of juniper (Juniperus sabina) was administered in the old times to the primiparous cows to favour the delivery. The name of the name of the species is controversial: for some it should come from the ample diffusion of this species in Lebanon, the homeland of the Phoenicians, for others, on the contrary, should have origin from the Latin term “Phoenicia”, purple red, due to the colour of the ripe pseudo-berries.

The Phoenician juniper (Juniperus phoenicea L. 1753), commonly known as Lydian cedar, sabina baccifera, maritime savin or false savin, arâr, is a species with Euro-Mediterranean distribution including the Mediterranean coats, with extensions towards the north and the east: from Macaronesia (islands of Cape Verde, Azores, Canaries, Madeira) to Palestine and from North Africa up to the Pyrenees and the gulf of Trieste, long the coasts as well as on their reliefs up to 600-800 (1350) m of altitude.

Its habitats are the coastal zones of rocky scrub, especially calcareous, very poor garrigue and sandy shorelines; rarely in pure formations, usually mixed with other species of the Mediterranean brush (the junipers dune scrub, flattened by the wind, resistant to salt corrosion, first and robust defence line of the shorelines) such as the tree spurges, the rockroses, the mastics, the Mediterranean buckthorns, the oleasters, etc. It is a very useful species for the consolidation of sandy soils subjected to the erosion and for the creation of windbreak bands in the zones close to the shores. 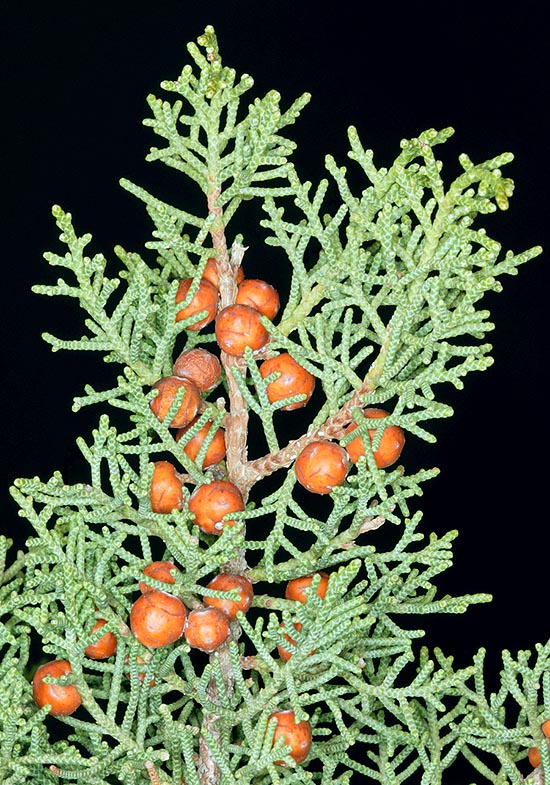 It is a large shrub or a small evergreen tree with dark green crown, dense and much ramified, of variable shape: initially globose or conical, then expanded and umbrella-shaped in the old specimens, with usually straight trunks that get oblique and twisted close to the sea. It is, as an average, 3-8 (12) m tall, and the stems have greyish-brown bark vertically descaling in thin stripes that roll up revealing the underlying reddish layer.
The radical system is very robust and is suitable for penetrating even inside the rocks. The young leaves are needle-like and usually soft or little prickly, up to 12-14 mm long patent, flattened; in the adult branches they are similar to those of the cypress, up to one mm long, squamiform, and densely imbricate, scarry at the margin and equipped on the back of a resiniferous gland, opposite or at times whorled at three, then arranged on six rows.

The cones are small, carried on the apex of the small branches; the male ones are ovoid, yellow whilst the female ones, globose, have a dark green or blackish colour. The reproductive period lasts from March to April. Normally the species is monoecious but there are also dioecious populations.

The galbulus has the appearance of a fleshy berry, globose or ovoid, (botanically, it is a pseudocarp), of (6) 8-10 (12) mm, drooping, ripening n two years; when young is green-yellowish and glossy, then dark brick red and opaque, and contains 3 to 9 seeds, ovate, grooved.

In the western Mediterranean region, at low altitudes, is present the subspecies turbinata (Guss.) Nyman (1881) that distinguishes due to the acute leaves and fruits (12-14 mm) bigger than those of the nominal subspecies, and vertical branches longer than the lateral ones.

The Phoenician juniper easily distinguishes from the Common Juniper (Juniperus communis) and from the Prickly juniper (Juniperus oxycedrus) as these have needle-like and prickly leaves also when adult, the first with aromatic glaucous-pruinose berries of violetish colour and leaves with only one white stripe above, the second due to the brownish or red-brown insipid berries and leaves with two white stripes above.

The Phoenician juniper is a very slowly growing species but is also much long-lived; its wood is hard, compact, differentiated, fine-grained, resinous; it is appreciated in cabinet making and has been used for the fabrication of pencils. 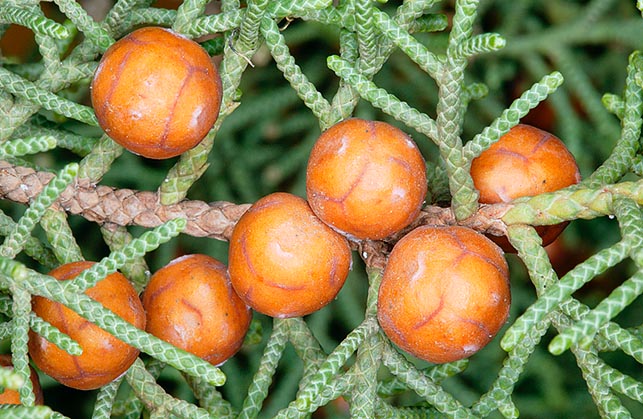 In Libya the young branches of the Juniperus phoenicea (with 2-3 % of a very toxic essential oil containing pinene, sabinene, sabinol, geraniol, tannins, etc.), as well as the small branches of the Savin juniper (Juniperus sabina) having a strong emmenagogic action and stimulant of the uterine contractions, are used by the local populations for procuring an abortion with extremely serious risk for the health seen that they cause burning and irritation of the oro-pharyngeal mucosae and of the stomach with nausea, vomiting, violent abdominal pains, headache, haemorrhagic nephritis and muscle cramps.

From the botanical section Sabina have been introduced in some countries also exotic species such as the Eastern juniper (Juniperus virginiana) native to North America, introduced in Europe in 1664, utilized as ornamental plant whose wood is employed for making pools, floors, extraction of essential oil, etc. Always in the parks and in the gardens are cultivated also Juniperus chinensis (from China) and Juniperus excelsa (from Balkans, Asia Minor and Caucasus).