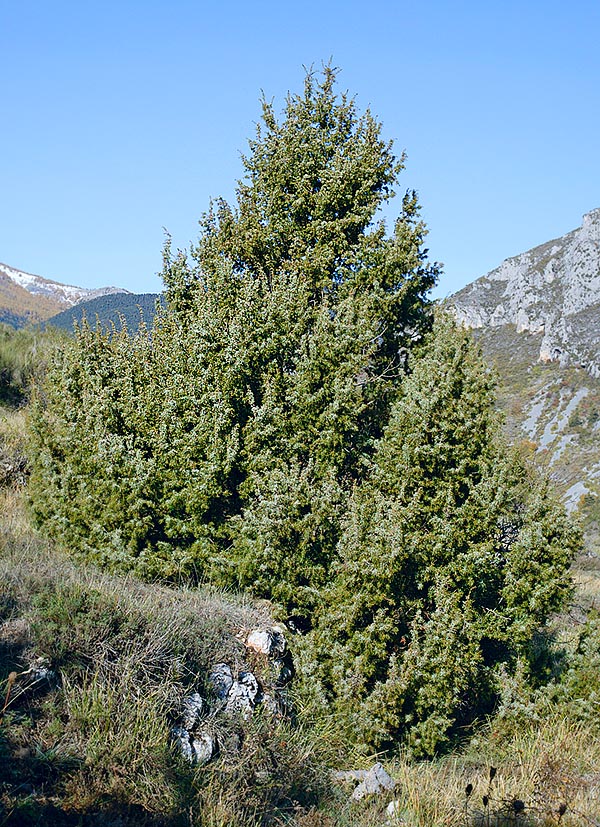 The genus Juniperus includes, after various authors, 50 to 67 species of monoecious and dioecious trees and shrubs with leaves opposite or in verticils of three, aciform or squamiform or with both forms.
Female axillar or terminal cones ripening in the first, second or third year, usually ovoid or globose.

The species of this genus are amply distributed in the eastern hemisphere: Europe (including the Azores and Canary Islands, Asia Minor and Africa), Central Asia (from Turkmenistan to western Himalaya), China, Far East (Japan, Korea, Sakhalin Island, Taiwan), and in the western hemisphere (North America, USA and Canada, Mexico, Guatemala and in the Caribbean).

It includes various species of high trees, up to 20-40 metres of height (like, for instance, Juniperus procera of Ethiopia), and low shrubs with drooping branches.

The name of the genus, after some authors, should come from a Celtic word meaning rough, harsh, due to the prickly leaves, after others from the Latin names “iùnix”, heifer and “pàrio”, I deliver, because one of the species of juniper (Juniperus sabina) was admi- nistered in the old times to the primiparous cows for favouring the delivery. The meaning of the name of the species comes, on the contrary, from the Greek “oxys”, prickly, sharp, and from “kédron”, which indicated a tree, most likely a juniper with the apiculate leaves, rigid and prickly.

The Prickly juniper, also kown as Prickly Cedar or Cade (Juniperus oxycedrus L. 1753), is a big shrub usually dioecious (1-6 m) or rarely small tree (up to 13-15 m), evergreen, glaucous, resembling the Common juniper (Juniperus communis) but with longer aciform leaves (15-25 mm) and with two stripes pale above (only one stripe in the common juniper), inserted on the small branches in verticils of three. Bronze, brown or blackish (yellowish when unripe), pruinose insipid, 8-15 mm galbuli (pseudo-berries), containing three seeds of lanceolate shape and obtusely triangular section. The male cones are ovoid, yellowish, of 4-5 mm; the blooming occurs from February to April.

The posture, like that of the common juniper, is erect in the female specimens and with broader top with ascending branches in the male ones. The radical system is very robust, able to penetrate into the cracks of the rocks; stem with grey-brown-reddish bark peeling in longitudinal stripes, in the youngest branches reddish brown, branches obscurely trigonal. The wood, odorous, has red-violaceous duramen and is very hard, of fine texture, resinous and almost unchangeable.

Once, it was widely used for the production of charcoal and, due to its remarkable durability, was employed as pole for vineyards and for beams in rural shelters. In the Classical Period, when the diameters reached by this plant were surely bigger, from the trunks they made statues. 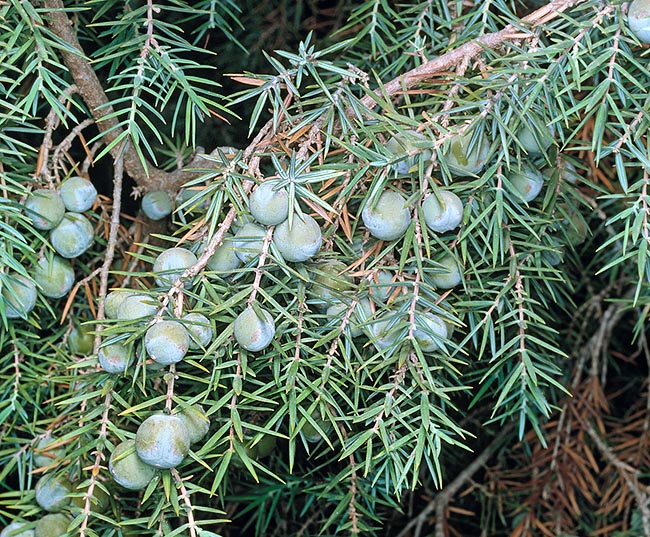 Heliophilous and xerophilous species, usually dioecious, is found as pioneer of arid sites, often rocky, near the coasts, but also in woods, thickets and Mediterranean garrigues. Can reach the 1600 m of altitude © G. Mazza

This species is distinguished in three different entities:

subsp. badia pyramidal tree (15-20 m tall) with leaves of 12-20 x 1,2-2 mm, usually acute (in the male plants they are shorter, 8-12 mm, and sub-obtuse) and 10-13 mm berries, more or less pruinose when young, brown-violaceous when ripe, described north of Algeria in Portugal and Spain;

subsp. macrocarpa with up to 2,5 mm broad leaves and berry brownish-pruinose, with diameter of 8-15 mm, which lives in the stabilized dunes and the coastal sands of the Mediterranean where it is commonly known under the name of large-fruited juniper.

Juniperus oxycedrus is a heliophilous, xerophilous and pioneer plant of the arid sites close to the coasts, also rocky, woods and thickets and Mediterranean garrigues, from the plan up to 1600 m of altitude, in all the Mediterranean area (in Morocco, Portugal, northern and southern France and Italy, from east to west Iran, in southern Lebanon and Israel). It is one of the vegetal elements characterizing in a very striking way some forms of the Mediterranean landscape forming a sort of low and dense thicket, flattened by the wind, but not rarely, along the littorals less disturbed by the man (however nowadays very rare!), rising in big arborescent specimens, the first and strongest defence line of the coastal systems.

The illustrious and never forgotten Prof. Valerio Giacomini wrote about this: “For seeing this vegetation in its full vigour and in its full integrity we should have to go in some less frequented areas of the Sardinian east coast; the mighty twisted specimens, but in full and intact vegetation, emerge on the top of the first dunes like victorious flags to mean the triumph of the life on the harsh adversity of the elements. But everywhere the existence of these plants is endangered; what cannot be destroyed and overwhelmed the strongest forces of the physical world, can be cancelled in a few days by the man, with the employment of monstrous mechanical means.” 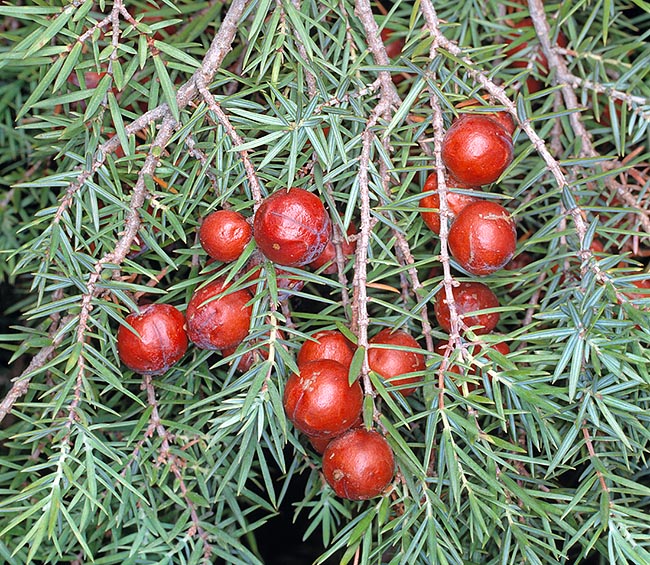 The Prickly juniper can be used for the consolidation of the sandy soils against the erosion and for forming hedges and barriers. From the dry distillation of the wood of the prickly juniper they get dark, dense, aromatic oil, with a strong smell of smoke called cade oil (“Pix juniperi” in the pharmacopoeias), mainly formed by phenols (guaiacol, ethyl-guaiacol, creosol), sesquiterpenes (cadinene and others), utilized (not at family level!), in some cosmetics and sebum equilibrant products, and traditional preparations for the treatment of eczema, psoriasis, alopecia, oily acne, dandruff, etc., and external medications of the skin, as well as for preparing ointments with anti-revulsive and antiparasitic action. This particular oil was used by the old Romans to embalm the dead and it was thought the by burning the wood of the prickly juniper it was possible to remove the snakes.

The galbuli have applications analogous to those of the common juniper and have antirheumatic, anticatarrhal, balsamic, antiseptic, stimulant, rubefacient, diaphoretic and depurative action; they are highly sought by many species of birds who are the main agents of the dissemination.