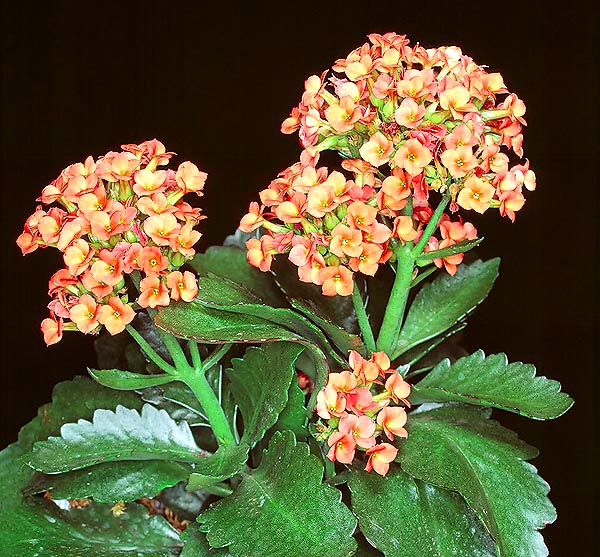 This plant is native to northern Madagascar, where it lives on the slopes of the Tsaratanana Massif, between 1600 and 2400 m of altitude.

The name of the genus is of uncertain origin, as the same has not been specified by the author, Michel Adanson (1727-1806), after some it is coming from the Chinese name of a plant belonging to the genus; the species gets the name from the German nurseryman and dealer of seeds Robert Blossfeld, who introduced it in cultivation in 1932.

The Kalanchoe blossfeldiana Poelln. (1934) is a succulent, perennial, herbaceous plant with erect stems, ramified, up to about 45 cm tall. The leaves, on 2,5 cm long petioles, are opposite, fleshy, persistent, elliptic to spatulate, of glossy dark green colour, 3-10 cm long and up to 4 cm broad, with entire or indented margins, at times reddish if in full sun.

Inflorescences in winter-spring in thick terminal cymes, much ramified, on a scape long up to about 10 cm; the single flowers, long lasting, on a 0,5-2 cm long peduncle, have lanceolate, 0,4-1 cm long, sepals and scarlet-red corolla with a 0,8 cm long tube and four 0,4 cm long lobes. The plant is a short-day species; for blossoming it requires at least six weeks with 14, or more, hours of darkness per day. The fruits are erect follicles containing several tiny ellipsoid seeds. 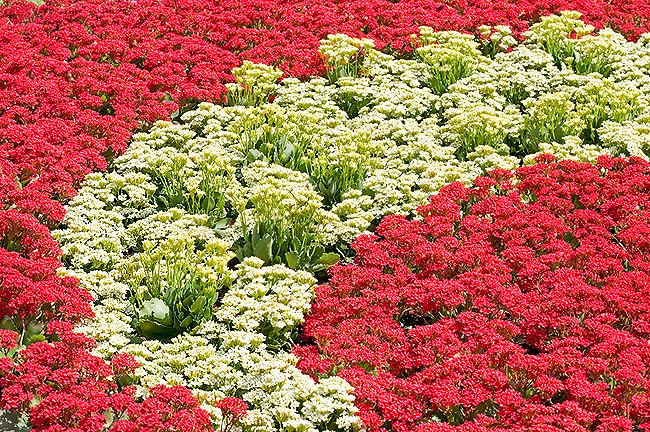 May be cultivated in open air for flowerbeds or edges. Hybrids with white, yellow, orange and pink flowers © Mazza

It reproduces by seed, in autumn or spring, to be placed in surface, being the germination stimulated by the light (positive photo-sensitivity), utilizing a fine half-sandy, soil; the seeds germinate in about 15 days at the temperature of 20 °C and the first blossoming takes place after 9-10 months. It easily reproduces also by apical cutting, left to dry up well, in spring, on a substratum formed by soil and sand, or agri perlite, in equal parts, at the temperature of 18-22 °C.

The Kalanchoe blossfeldiana, in its numerous varieties and hybrids, is the plant of the Crassulaceae holding also a remarkable economic importance, as it is produced annually in great quantity as interior flower plant, especially in the winter period, but it may be induced to flower in whatever time of the year, provided it is submitted to the necessary darkness period.

Whilst the plant in the wild has only red flowers, the varieties and hybrids have a great diversity of colours, from white to yellow, pink red in various tones; very popular are also the double-flower varieties, commercialized with the name of ‘Calandiva’. It may be cultivated in open air, for flower beds or edges, only in tropical and subtropical climate zones; in fact, it does not bear temperatures close to the 0 °C, or little below, if not for a very short time. 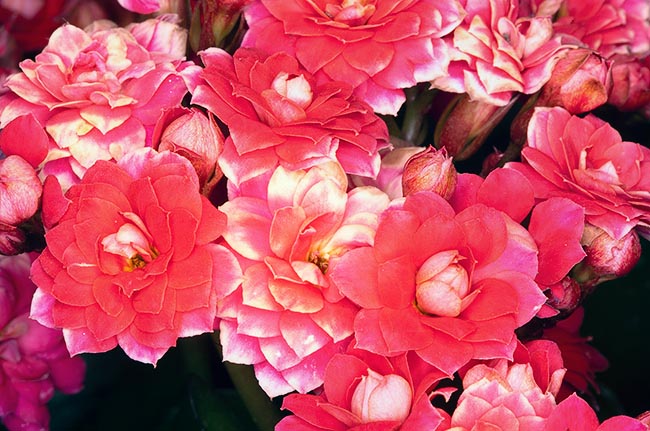 The exposition must be in full sun or slight shade on preferably clayey soils with addition of sand or crushed stones for improving the drainage. When in pot, for inner spaces decoration, it is to be placed at the maximum possible luminosity and at temperatures not lower than 10 °C, utilizing substrata formed by soil and coarse sand, or agri perlite, in equal parts.

In summer, watering are to be regular, but allowing the soil to dry up before giving water again, scarce in winter or when they are submitted to artificial darkness for obliging them to bloom. During the blossoming, which lasts about 3 months, it may be fertilized with manure rich in potassium and poor (or devoid) of nitrogen, at half of the recommended dosage, every three-four weeks. It is subject to aphids’ attacks and for this reason it must be controlled periodically in order to effect a prompt intervention.

Kalanchoe blossfeldiana was last modified: May 8th, 2018 by Giuseppe Mazza