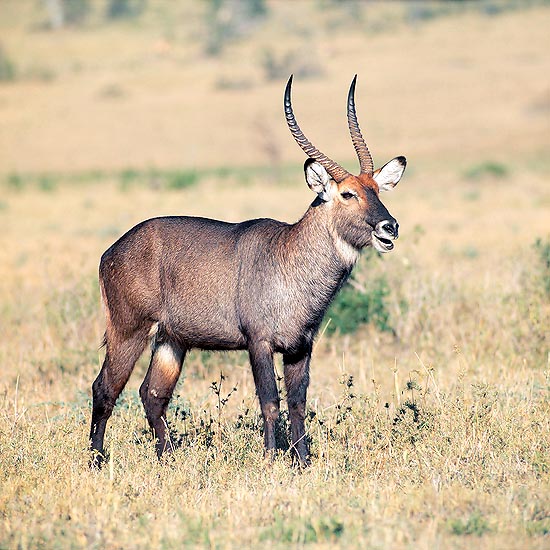 A Kobus defassa male with its showy horns © Giuseppe Mazza

What written for the Ellipsen waterbuck (Kobus ellipsyprimnus), regarding its physical description is valid for the Defassa waterbuck (Kobus defassa Ogilby, 1863), order Artiodactyla. The only remarkable difference stands in the white rump, typical of the defassa which in the ellipsyprimnus is replaced by the elliptic drawing which gives it the name.

The geographic distribution of this bovid (Bovidae), apart that thin strip where the two ranges overlap, is, on the contrary, clearly distinct, and separated by that line, roughly North-South represented by the Rift Valley, west of which the Defassa waterbuck is present, which occupies, however, a clearly bigger surface.

This area extends from the Senegambia to all that sub Saharan zone represented by the countries of the Guinea Gulf, but limited to a strip half way between the coasts, in whose forest is absent, and the Sahel, the zone of arid transition which acts as anteroom to the desert.

Practically, it is exclusively represented in the humid savannah between the pluvial forest and the arid savannah, where the water is always present and where it can find thick and green vegetation. The more the habitat is arid, the more sparse and rare are the zones suitable for hosting these herbivores.

Further East, the area of presence extends to almost all equatorial central Africa, excluding the part occupied by the real pluvial forest and by the basin of the Congo and its tributaries, then in the region of the Great Lakes, in Rwanda, Burundi and Uganda, finally in Kenya, Tanzania, Angola and Zambia, an area, in short, which is abundantly ampler, at least five times, than that of the ellipsen waterbuck.

Also the habitat and the habits retrace those of the other subspecies: close dependence on water and on thick vegetation zones, territoriality and sedentariness, alimentary choices (it is mainly a “grazer”, which browses the grasses from the ground), however the “browsing” (present at times also in the species ellipsyprimnus) is, maybe, in the Defassa, even more practiced and it is not a rare thing to see it pulling leaves from the branches, especially during certain periods of the year. 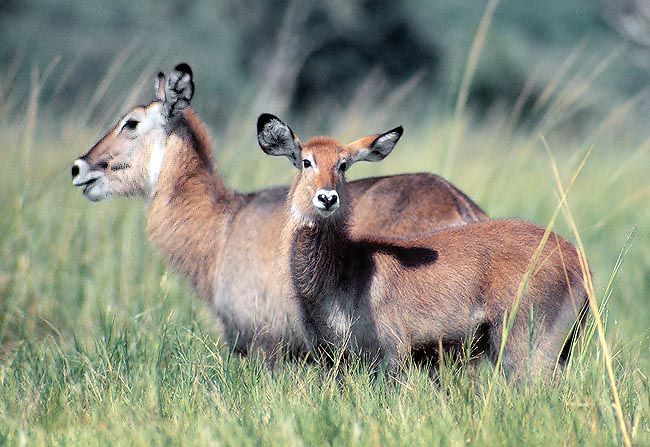 The reproduction, especially in the frankly equatorial areas, has no seasonality, whilst, in the tropical zones, seems more connected with the rain season, as it happens in the case of the ellipsen waterbuck; on the other hand, also the last one may reproduce all the year round, in the Equatorial belt, and this would demonstrate that the difference stands more in the geographic situation than in the species.

The two species may cross and the coupling results fertile.

The waterbuck tends to have timings of activity varying in function of the environment and of the “disturbance” represented by predators, human activities and climatic factors. Usually, the preferred hors for grazing are the early morning and the late afternoon, whilst the central hours are spent at the shelter, ruminating and, at times, making short forays for taking other food. The night pasture is not rare at all and often we see a peak after the midnight or between midnight and three in the morning. In these cases, at times, the pasture of the morning is delayed or even omitted.

The “body language” is an important means of communication of the intentions and the status of each single individual.

Postures of imposition and intimidation are, usually, a getting close with outstretched legs and the neck and head raised, presentation from the side in order to appear bigger, shaking of the horns, turning the head in opposite direction, goring objects, shrubs, etc. 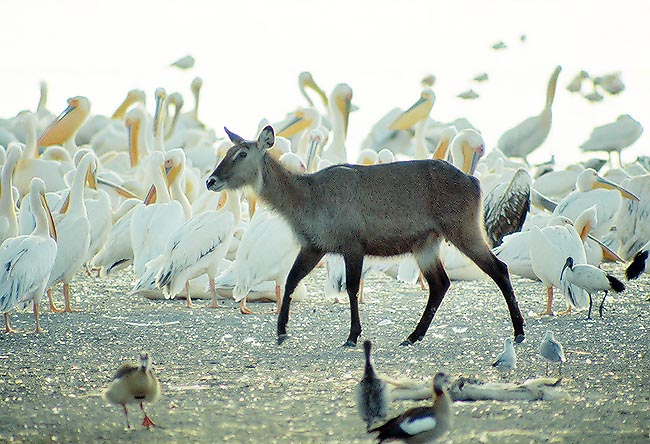 Indifference between species. This female crosses calmly a crowd of pelicans © Giuseppe Mazza

The submission is shown, instead, by the “champing”, a submitted biting, like that of a dog which is playing or which tries to restore a friendly relationship after having been punished or reprimanded, a lowering of the head or, at the contrary, a raising it, almost to exhibit the throat as sign of submission (I refer to your clemency).

Marks which are preceding the mating are, in the male, an erect posture similar to the imposition, pushing of the hindquarters of the female, at times with the nose or the snout; in the female, the “champing” is frequent, as for the submission, a typical posture, with the neck posing as a “gooseneck”, a lowering of the head, urinating because of the courting, all signs of acceptance of the male’s courting.

Also in this species, the young is immediately able to follow the mother and relies, for its own safety, not much on the immobility in some shelter but rather on a prompt flight.