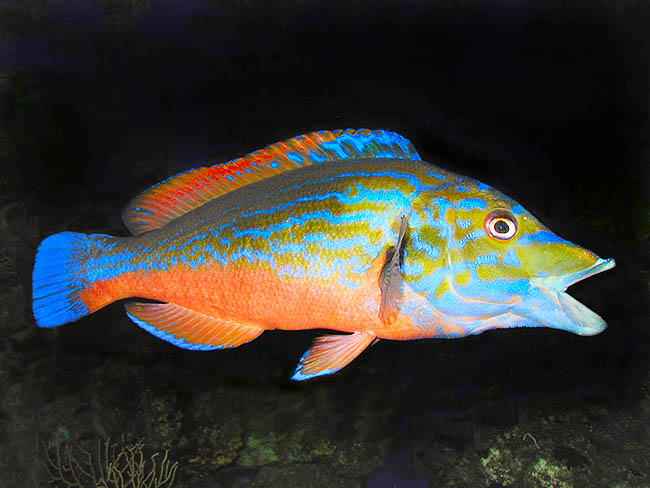 Male of Labrus mixtus in nuptial livery. It seems a painter's palette: difficult to do better © Giuseppe Mazza

The Cuckoo wrasse (Labrus mixtus Linnaeus, 1758) belongs to the class of Actinopterygii, the ray-finned fishes, to the order of Perciformes and to the family of the Labridae.

The name of the genus and the species come both from the Latin: “labrum” = lip, referring to the large lips; and “mixtus” = shuffled, mixed, with reference to the mixture to say the least astonishing, of the colours, coming, once again, from the protogynous hermaphroditism of the species.

It has a very vast distribution. Present, with a more or less high concentration, in the Mediterranean, where it is scarce in its eastern part and from Senegal to North Europe up to northern Norway and to Iceland. It is abundant in the English waters, but also at the Acores, Canary Islands and Madeira.

Usually, it lives solitary or in pair, among the formation of gorgonians, in dark grottos between the 40 and 80 m of depth, going down, in autumn, even at 200 m, whilst, in spring, it rises to the surface up to about the 15 m. And this is an endangered biotope which menaces the species.

It is a protogynous hermaphroditic species: the females, while ageing, transform, in fact, in males, and reach even the 35-40 cm. Elongated body and head, laterally compressed, and mouth with big, fleshy, lips. Maxilla and mandible show a row of sharp caniniform teeth, among which stand out the 4 front ones, which are longer. There are no palatal, vomerine and lingual teeth, but there are valid pharyngeal ones. The long dorsal fin has several spiny rays in the fore part. Also the anal one, shorter, has two spines, whilst the ventral fins have only one of them. The pectoral fins are spatulate and the caudal is large and roundish. 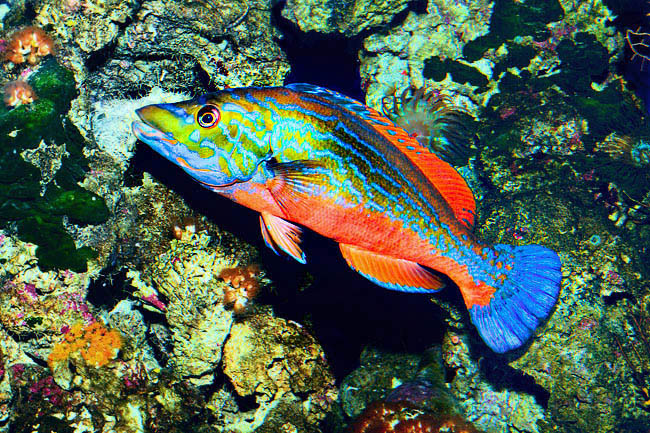 It's a shy animal living among gorgonians. Males build a nest and care the progeny © Giuseppe Mazza

The colouration changes during the time depending on the age, the sex (with relevant transition), and the reproductive period, when the males flaunt spectacular nuptial liveries.

The nuptial livery of the male would seem gotten out from the palette of a painter, and you are invited to look at the nearby photos.

They nourish mainly of crustaceans and molluscs, but also of worms and small fishes. The reproduction takes place in spring-summer depending on the locations. The males in nuptial livery become territorial and aggressive towards the rivals who dare to get closer to their love nest, woven with seaweeds. The females may lay even 1.000 eggs, which the male hurries to fecundate. The young swim often in school with the parents and have a life expectancy of 20 years. The vulnerability index of this species is of 67 over 100.