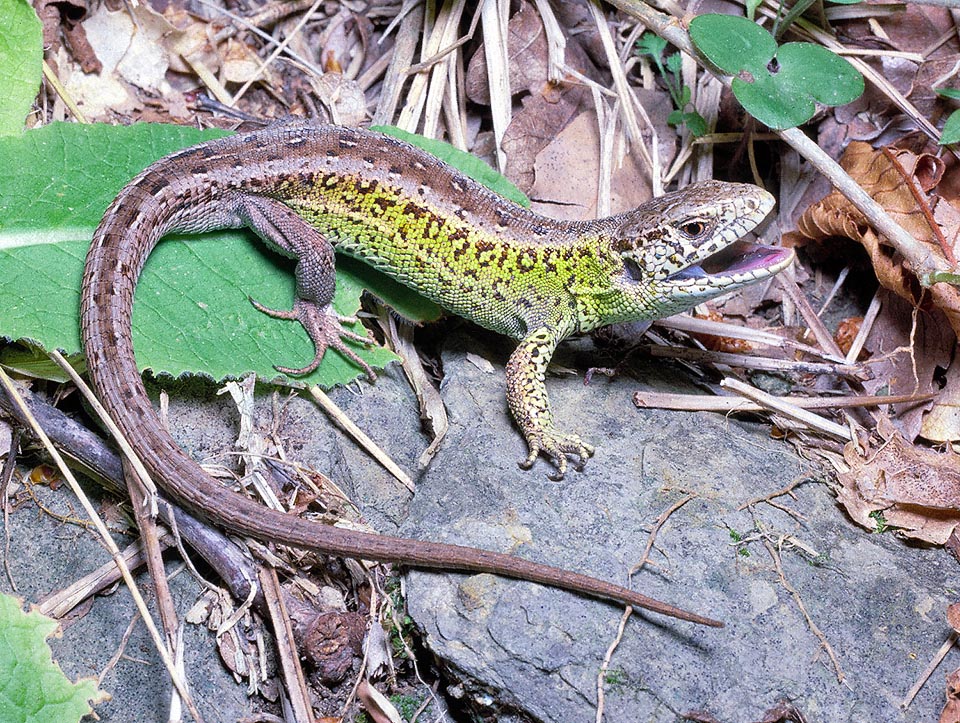 20-30 cm long, tail included, agile and nilmbe as the scientific name indicates, the Lecerta agilis is one of the most frequent saurians in Europe © Giuseppe Mazza

The Sand lizard (Lacerta agilis Linnaeus, 1758), together with Zootoca vivipara, is one of the most diffused saurians present in Eurasia.

The name of the species Lacerta is the one the Romans gave to the lizards, whilst the specific name agilis = agile, fast, slender reminds us, always in Latin, the characteristics of the species.

The English term of “Sand lizard” refers, conversely, to the environment: the sandy substratum it seems to prefer among the shrubs where the animal hides.

Lacerta agilis has a very ample habitat. It is found from some sites in central-southern England and from southern Sweden up to the Alps; from some stations on the Pyrenees and of central-eastern France up to the Balkans; furthermore, is present in central and eastern Europe up to Russia, central Asia and NE Turkey. 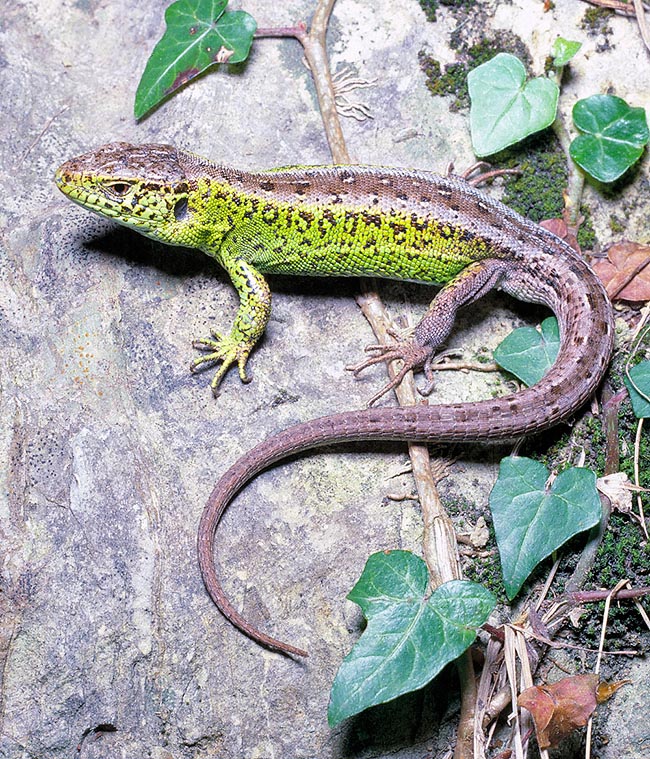 Presently are recognized various subspecies among which are:

– Lacerta agilis garzoni in some zones of the Pyrenees

– Lacerta agilis exigua from the Dnepr River to central Asia

The sand lizard is a diurnal and heliophilous species.

It lives in open and semi-open zones but with presence of vegetal shelters such as shrubs or tall grass where it rapidly finds shelter with a particular preference, as we have told, for the sandy substrata. It may be met in the margins of the woods, meadows, fallows and also in anthropized zones; in the southern part of its habitat frequents alpine prairies and rocky slopes up to about 2000 m, whilst in the northern part we find it in heath environment or sandy coasts.

The period of activity is included between March-April and September-October, with variations depending on the considered zones and on the climate.

It thermoregulates in open air, always ready to start when a danger appears, such as a predator. Like all saurians its schemes of activity are a “compromise” between the necessity of nourishing, reproducing, socially interacting and avoiding to be preyed. Its defenses are, besides the camouflaging livery, the acute vigilance and the capacity of losing the tail when seized (autotomy).

Belonging to the group of the “green lizards”,Lacerta agilis is of medium size (20-30 cm), with stocky build, squat neck, massive head (bigger in themales) and rather short limbs. 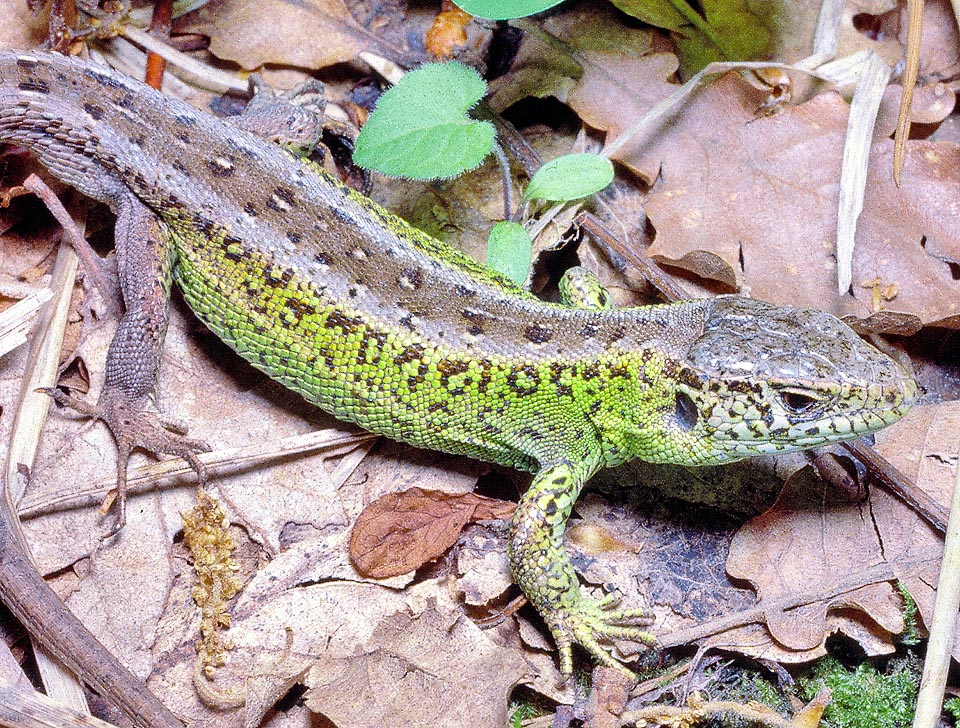 Particularly active in the good season, in the central months of the year; belongs to the group of the “green lizards”. Very variable livery depending on the subspecies, habitat, sex and age. Among the females prevails the greyish-brown, whilst the males are greenish especially on the sides and during the reproductive period © G. Mazza

Distinctive characters are: toothed collar, overlapped and angular ventral scales, central-dorsal band of small and keeled scales (also those of the tail) with remaining dorsal and lateral ones wider, wide over-temporal scales, only one post-nasal, small rostral and not in contact with the nostril.

The colouration is very variable, depending on the subspecies, on the zone, the sex and the age. Among the females prevails the brown-greyish, whilst the males are greenish especially on the sides and during the reproductive period.

The young are brown-greyish with ocellate spots on the sides and on the back.

Other characteristics of the livery, in the adults, are the presence of a reddish or brown central-dorsal band with darker spots and a white central line more or less continuous; in its turn this zone is edged dorso-laterally by pale strips without ornamentations; several rows of ocellate pale dots on the sides; whitish or yellowish abdomen with fine black spotting (especially in the males). However, can be met, in some zones, animals with reddish back or almost wholly green. 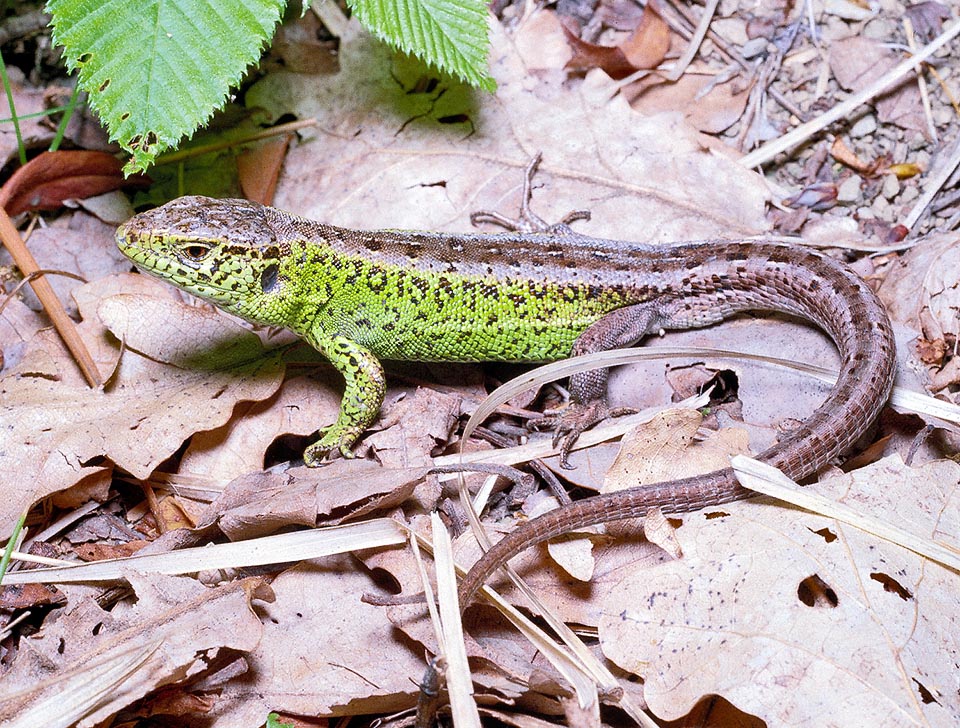 It nourishes of invertebrates, mainly coleopters, spiders, orthopterans, dipterans and lepidopters. There are even more reproductions per year with 5-15 eggs hidden in the soft soil, vegetal material or rubble. Number and size of the eggs vary depending on the location, on altitude, on climate and on the general status of health of the female © Giuseppe Mazza

The diet of the Sand lizard includes various type of invertebrates among which, coleopters, spiders, orthopterans, dipterans and lepidopters. The analysis of the trophic spectrum has evidenced variations in the type as well as in the percentage of the preys depending on the zone of the area considered. The scheme of activity may be unimodal or bimodal, with an increase of the activity in the central months of the year (June-August).

The density of individuals per population can reach, depending on the locations, rather high levels; moreover it seems that the home range of the males is slightly ampler than that of the females, this could imply the presence of polygyny.

After interactions males-males and males-females, the coupling occurs and then the deposition of eggs in morbid soil; vegetal material or rubble. There may be several ovipositions during the year and the eggs vary between 5 and 15, with approximate dimensions of 12-15 x 7-10 mm. Mating, oviposition, number and size of the eggs, dimension of the brood and hatching vary depending on the site, of the altitude, the climate and the general status of health of the female.