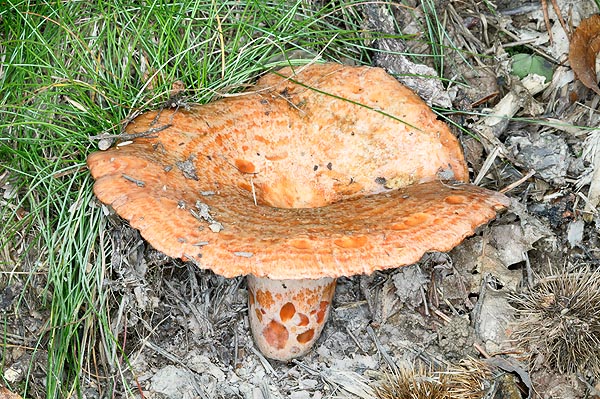 Edible and commercialized, but not so good as the Latin name suggests © Giuseppe Mazza

The etymology of the name of the species comes from the Latin “deliciosus” meaning “delicious”, due to its taste.

The genus Lactarius includes terrestrial carpophores, of small, medium and big dimensions, mycorrhizal. It has a homogenous structure, which means that the flesh of the stem is contiguous to that of the cap and their separation does not happen without a breaking.

The structure of the flesh is formed by spherocytes, that is, by spherical cells, present on the whole carpophore, but on the texture of the gills; and due to this, the flesh is defined as fragile, which means that it breaks neatly, as if it was a crayon.

When the flesh is broken, a liquid (latex), more or less abundant, comes out produced by specialized hyphae, called “lactiferous”.

The carpophores belonging to the genus Lactarius are fleshy, with a much variable diameter of the cap, going from 1-3 cm up to about 25-30 cm, with a more or less regular shape and the typical development from convex to flat-convex, depressed and finally funnel-shaped.

The hymenophore is formed by lamellae and lamellulae, adnate, subdecurrent or decurrent, thick or spaced, with a texture without spherocytes and regular, irregular, with lactiferous veins.

The flesh is mainly consistent, fragile, easily breaking, with a mostly pale colour, but at times changing colour when exposed to the air. 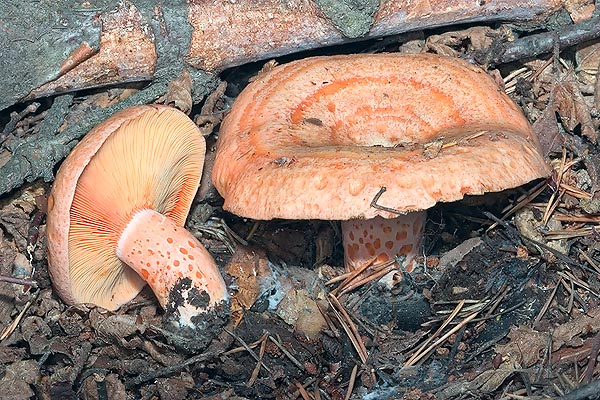 The smell is much variable, going from the fungine to the fruity passing through the mossy or earthy.

The latex may be abundant or scarce, creamy or watery, white or coloured with reddish tonalities, unchangeable or changing to the air.

The stem is central, mostly cylindrical, more or less slender, robust, full or fistulous, smooth or with scrobiculations or guttulas, dry or viscous, mostly subconcolor to the cap.

Cap: 4-12 cm, initially convex, at times umbilicate, then flat and finally cup-like depressed, but not deeply; initially with inrolled margin, then rounded and bent downwards to the gills, little lobed, thin; separable cuticle for about one third of the radius, little zoned, irregular appearance due to small depressions, glossy and somewhat greasy with humid weather, slightly pruinose if the same is dry; bright-orange, brownish-orange whilst the zoned part is darker.

Stem: 2-5 x 1,5-2,5 cm, cylindrical, quite often attenuated down or even with a sharp base, short, full then hollow, or even hollow at once, finely pruinose, decorated by scrobiculations of various dimensions; of the same colour as the gills of just paler, often stained of green, the pits are orange-red and stand out against the pale background of the stipe. 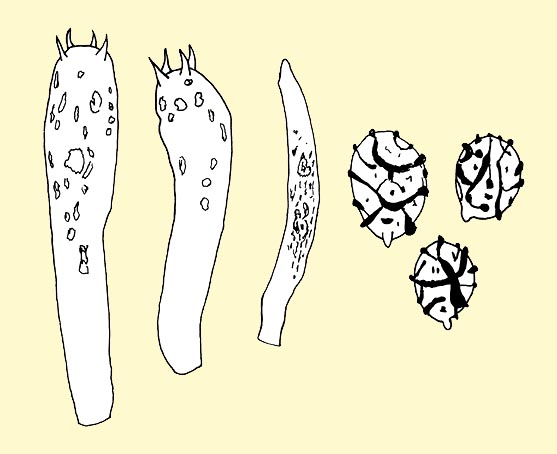 Habitat: it grows in summer and autumn under two-needled pines, much abundant.

Spores: rounded or ellipsoidal, with amyloid warts, united in thick crests and at times connected by incomplete reticle, 8-9,5 × 6-8 µm.

Remarks: it is an easily remarkable species due to its peculiar characters: the habitat under two-needled pines, the orange-red colour with darker zonations, the bright, unchangeable, orange latex and the stem decorated by scrobiculations.

It may be mistaken with Lactarius salmonicolor Heim & Leclair, with unchangeable reddish-orange latex, but which grows under the silver fir; Lactarius deterrimus Gröger, which, however, has orange latex turning to orange-red and grows under the spruce; Lactarius quieticolor Romagnesi, which has the same habitat, but is smaller and has a colour to brown-grey, the stem almost without scrobiculations and the latex bright orange turning to the greenish-yellow when it dries up on the gills.

It is a sought for and commercialized species in some areas such as the Cataluña (called Rovellò or Pinetell); France, especially on the South (known under the name of Catalan); Liguria (known as Sanguin) and, however, in all countries bordering the Mediterranean Sea.