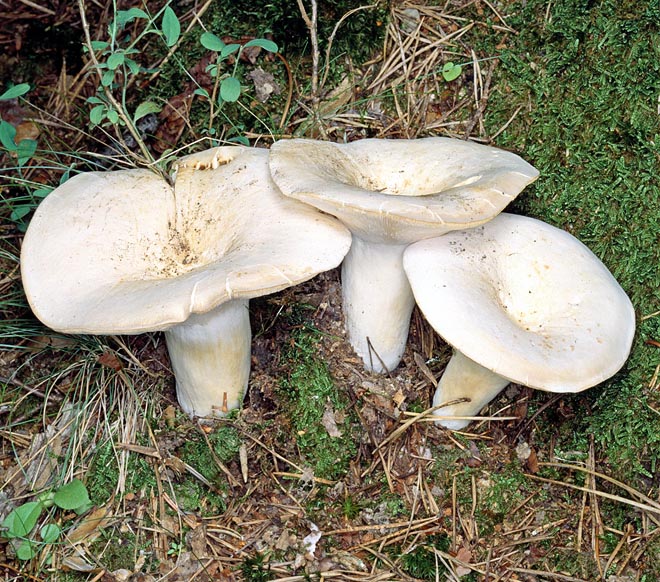 Lactarius piperatus is not edible because acrid, but some do eat it © Giuseppe Mazza

The term “piperatus” comes from the Latin “piperatus” = with flavour of pepper, due to its latex which is peppery.

It s a very common fungus and for this reason it has many dialectal names.

Description of the Subgenus and Section

To the Subgenus Lactarius are ascribed fleshy, firm fungi, with white cap, cream-whitish, cream-hazel, with ochraceous dots, opaque, dry, cracked, at times rugose at the margin; thick gills, from whitish to cream-whitish finally cream-flesh; more or less abundant latex; very acrid, from white to yellowish cream or greenish desiccated on the gills. The pileipellis is type cutis or tending mixed; spores with not much marked ornamentations, thin and consequently difficult to observe. Typus Lactarius piperatus.

To the Section Lactarius are ascribed fungi with unchanging latex or turning yellow-orange if in contact with KOH, yellowish or greenish cream if desiccated on the gills, very acrid. Typus Lactarius piperatus.

Hymenium: very crowded gills, tight, intercalated by numerous lamellulas, with furcations close to the stipe, adnate or decurrent, in the adult fungus they are always decurrent, separable, white with cream reflections then yellowish, spotted of hazel-rust on the lesions.

Stipe: 4-10 × 1,2-3 cm, very variable, slender or stocky, cylindraceous or attenuated at the base, central or excentric, full, firm, smooth or rugose, of white colour tending to cream, it spots of ochre starting from below.

Flesh: firm, compact, hard, white tending to get a cream colouration, after several hours turns brown-reddish, without smell, only when old it exhales an unpleasant smell, very pungent taste, acrid.

Latex: not too abundant, thick, very pungent, immutable white if isolated, when desiccates with the fungus it becomes yellow-olive, immutable to KOH.

Habitat : it grows under broad-leaved trees as well as under conifers, from early summer to autumn, gregarious, abundant.

Edibility: not edible due to the acrid taste of the latex; however, in some Italian locations and in some Eastern European countries it is consumed after appropriate treatments.

Microscopy: spores from ellipsoidal to almost rounded or even reniform, decorated by small and fine warts, amyloid, connected by an incomplete reticulum, 7-9 × 5,5-6 µm. Sub-clavate or cylindraceous basidia, with 2-4 sterigmata, without clamp connections, 50-56 × 7-10 µm. Fusiform or cylindraceous cystidia, blunt, at times with capitulum, 65-90 × 8-9 µm.

Remarks. It is a very diffused and frequent fungus. It is easily recognized due to its funnel-shaped look, the rather big size, the thick and very low gills, the white colour of the whole carpophore, the white flesh slowly turning ochre-yellowish when broken, the very pungent latex and flesh. Much similar is the Lactarius glaucescens Crossland 1900, which, however, has the cap mainly flat convex, less funnel-shaped, less rugose at the margin, with the centre often spotted of ochre, the more stocky appearance, the adnate gills, the flesh which, when broken, turns slowly greenish; the latex becoming yellow-orange when in contact with KOH; the intense reaction of the flesh to orange when in contact with KOH. Microscopically, the spores of Lactarius glaucescens appear more thickly ornamented, without reticulum but with short crests.