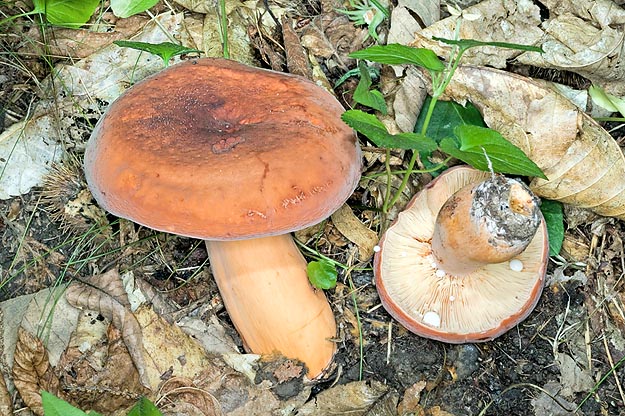 The etymology of the name: the Latin term “volemus” means “pear filling the palm of the hand”.

For this species, the dialectal terminology is quite poor, probably because it is a fungus little picked up for the consumption. However, it is known with the following names: “lattario volemo”, “later panas”, “vacchetta” in Italy; “vachotte”, “vache” in France; “lleterola roja”, “esnato”, “lactario anaranjado” in Spain; “Brätling”, “Milch- brätling”, “Brot- or also Birnenmilchling” in Germany; “weeping milk cap”, “voluminous-latex milky” in England.

For the description of the Genus, please refer to Lactarius deliciosus.

To the Subgenus Lactifluus are ascribed medium-large or large sized species, with dry cuticle, velvety, opaque, with colours varying from the white to the reddish orange; immutable white latex or which, at the most, turning to the brown. To the Section Lactifluus belong species having medium-large size, with reddish orange colours (only one whitish species), very abundant and imbrowning latex, not much thick gills. The spores are reticulate or warty with quite evident ornamentations.

Hymenium: adnate gills, decurrent in the adult fungus, rather thick, intercalated by several lamellulae of various lengths, ventricose, at times forking towards the stem; of ocherous-yellow colour, discolour brown when touched. 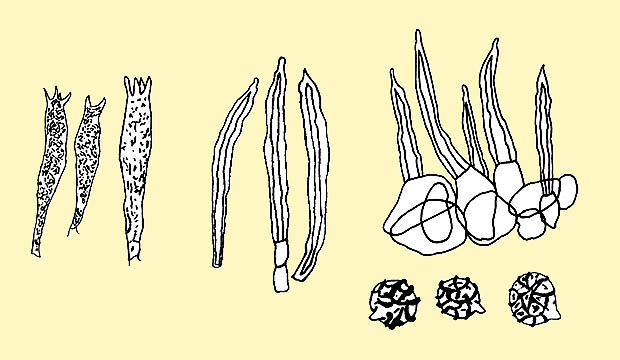 Stem: 4-8 x 1,5-3 cm, normally cylindroid, but which may be also swollen or tapered at the base, firm, solid, full then stuffed, pruinose, dry, wrinkled in the upper part as if it were an extension of the gills, concolour to the cap, but paler, discolouring dark-brown when touched.

Flesh: firm, compact, even hard, thick at the centre of the cap, thinner by the margin, cream-white, staining slowly brown in the cap and in the bark of the stem; strong odour of crustaceans or herring, mild taste.

Habitat: grows from early summer to autumn, under latifoliate, especially chestnut and oak, as well as under conifers; much common.

Edibility: edible even if discarded due to the odour, which anyway lessens much by cooking.

Microscopy: globose or subglobose spores, ornated by amyloid warts, united by crests and forming an alveolate reticulum with thin connexions, 9 – 10 × 8 – 9 µm. Basidia from cylindrical to subclavate, with 2-4 sterigmata, 56-75 × 9-12 µm. Abundant macrocystidia, fusiform, bristle-shaped, with thick wall, 77,5-90 × 7,5-10 µm. Fence-like pileipellis formed of fine hairs, long and winding, enlarged at the base, which emerge from a subpellis of pseudoparenchymatic type with subcylindric or subglobose elements of various sizes.

Remarks: this is a fungus quite easy to recognize due to its determining characteristics: the dry and velvety cap, the stem of the same colour, but paler; the abundant milk, tending to dark brown even if isolated and with a typical odour of herring; and, finally, the reaction of the flesh to the greenish when in contact with the ferrous sulphate. It might be mistaken with Lactarius rugatus Kühner & Romagnesi, which, at first sight, could be a double, and differs for the colour of the cap which is fawn-bright orange, the more spaced gills, the growth in Mediterranean zone under Quercus, the absence of macrocystidia, the oblong spores and the reaction of the flesh to the pink with the ferrous sulphate.