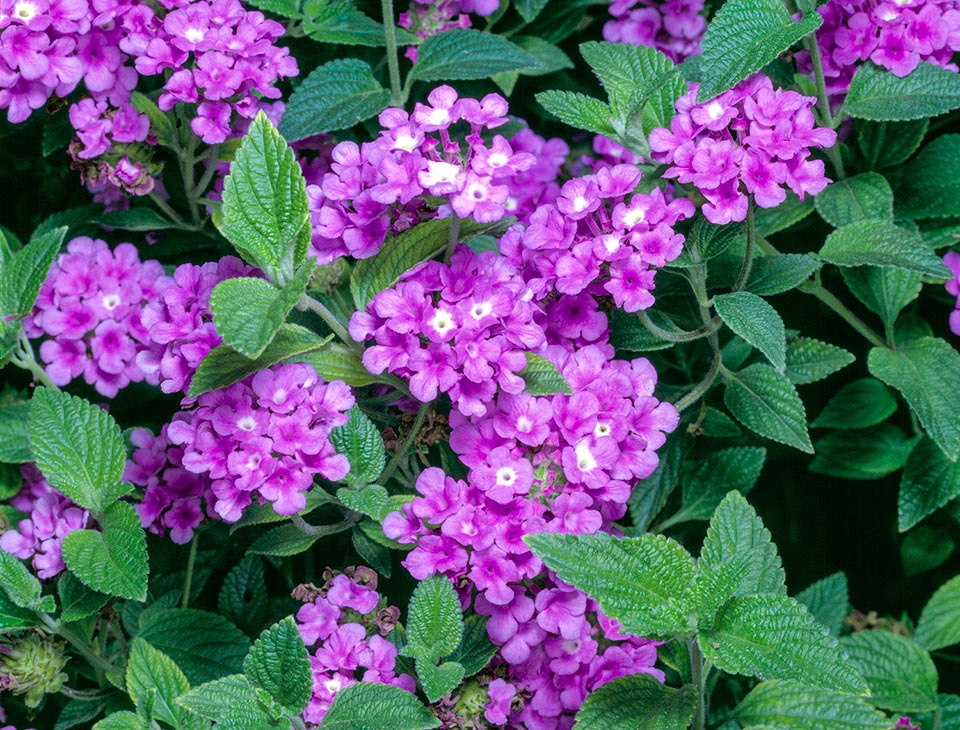 The Lantana montevidensis (Spreng.) Briq. is native to southern Brazil, Uruguay, Paraguay and Argentina. It is a very ornamental plant with scented flowers and consequently is cultivated almost in the whole world. Naturalized in many tropical and subtropical areas, like parts of Australia and of Hawaii, behaves as an infestant and invasive species.

The generic term Lantana comes from slow folding, bending, and refers to the Latin name of Viburnum lantana, because of the similar structure of the inflorescence. The specific term montevidensis refers to Montevideo, capital of Uruguay, where the species has been found. 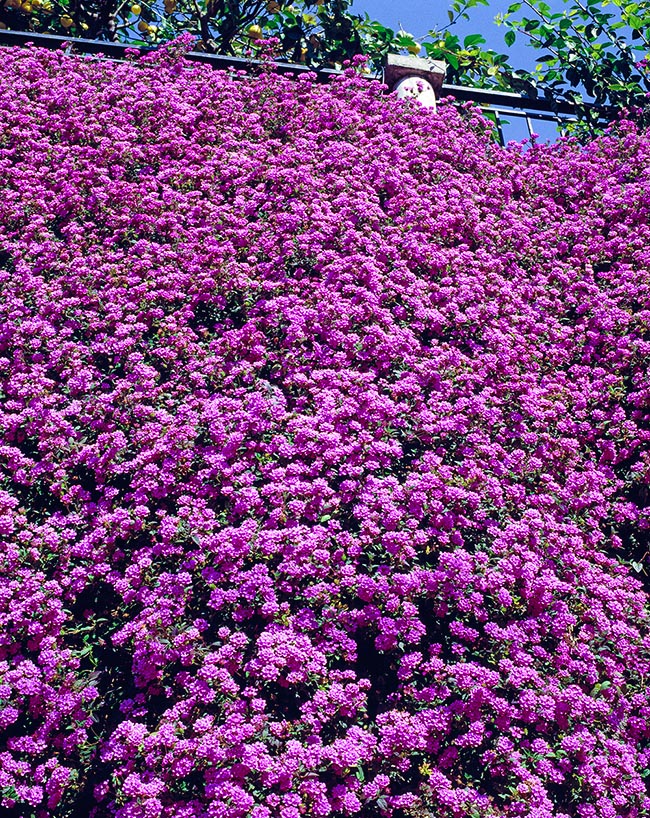 Suffrutex or small low growing shrub, with thin stems often creeping, here is cultivated in a hanging position. Spectacular cascade of flowers on a wall of a well sunny garden of southern France © Giuseppe Mazza

It has decussate, green, opposite or dull leaves, with petioles about 4 mm long and lamellae of varying sizes, with coarsely toothed margin, ovate to resinous lanceolate, usually wrinkled or scabrous on the upper pagina, pubescent in the lower pagina. The flowers are united in axillary inflorescences, umbelliform (corymbs), initially hemispherical, capitate (like a pinhead), 2.5 cm or more, wide, with ciliate, resinous bracteoles. The flowers are sessile, pubescent, with a calyx about 2 mm long and with 4 small deep teeth; infundibuliform corolla usually with long calyx, mauve or purple in colour, and whitish yellow throat. The gynoecium presents the oblique stigma. The fruits attract bees and butterflies. The fruits are dark purple, globular drupes, about 4 mm, fleshy, half enclosed by the calyx, with a woody endocarp and two monospermic nuclei. The seeds do not have an endosperm.

Lantana montevidensis is drought resistant, is suitable for creating dots of colours in the garden, and, in temperate climates, it blooms most of the year. It can tolerate partial shade, but blooms best in full sun. It can even be grown in pots but is less tolerant of dry soil compared to growing in open ground, so it is good to water regularly. The plant is poisonous and has a very pungent odour and a very sour taste. Conversely, the fruits are appreciated by birds which, in this way, ensure the dispersal of the seeds.

The extracts of the leaves of Lantana montevidensis are employed in the Brazilian traditional medicine to treat various diseases among which tumors and ulcerations. Recent studies have the presence of bioactive phytochemical substances, such as terpenoids, flavonoids, phenylpropanoids, present in this plant and therefore confirm the pharmacological use of the popular medicine.