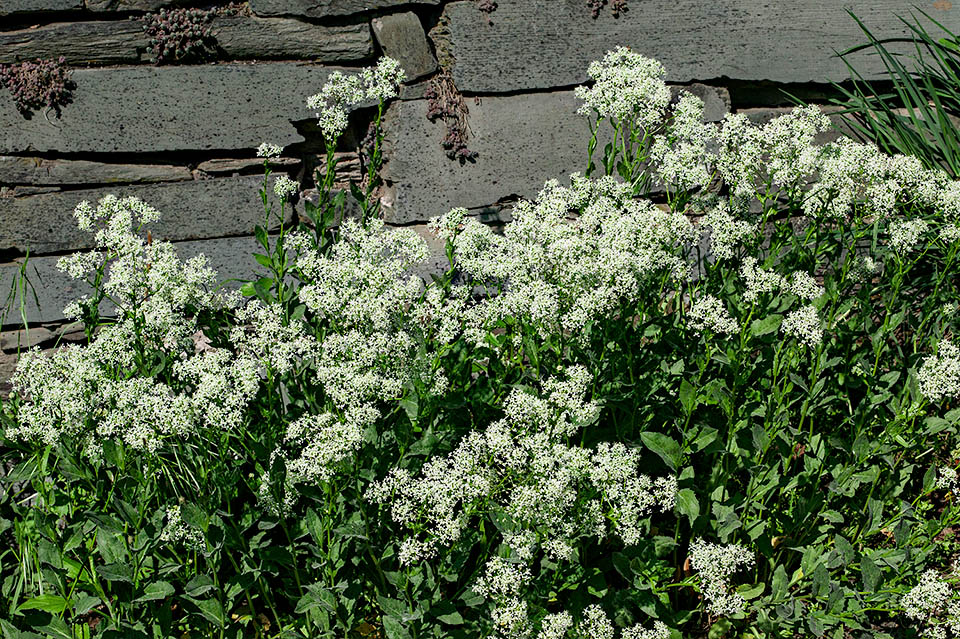 Lepidium draba is a species whose range goes from Europe to north and east China, from northern Africa to the Arabian Peninsula © Giuseppe Mazza

Lepidium draba L. is a species whose range extends from Europe to northern and eastern China, from northern Africa to the Arabian Peninsula. Due to human activities nowadays, it is naturalized in many parts of the world. It is a member of the tribe Lepidieae, family Brassicaceae, and is commonly known as white top, hoary cress, or thanet cress.

The present ample distribution reflects its adaptability and capacity of growing and reproducing in different environmental conditions, from coastal sites to mountains. On the Asian highlands it reaches the altitude of 4200 m, on the Alps up to 1520 m, in Iran and in Jordan 1600m, in the plateau of Al-Baha (Saudi Arabia) from 1700 to 2400 m. It is typical of open areas but can tolerate moderate shade, prefers dry soils, rich in nutrients, sandy and gravelly, clayey at times but does not stand water stagnation.

In the areas where it has been introduced (for instance, Great Britain, Canada, USA, South Africa, Australia), it behaves as weed of the sowable lands, of the pastures, and is also present in the uncultivated lands, in ditches and railway embankments and along the roadsides. The cultivation systems, such as the sowing, may favour its diffusion. 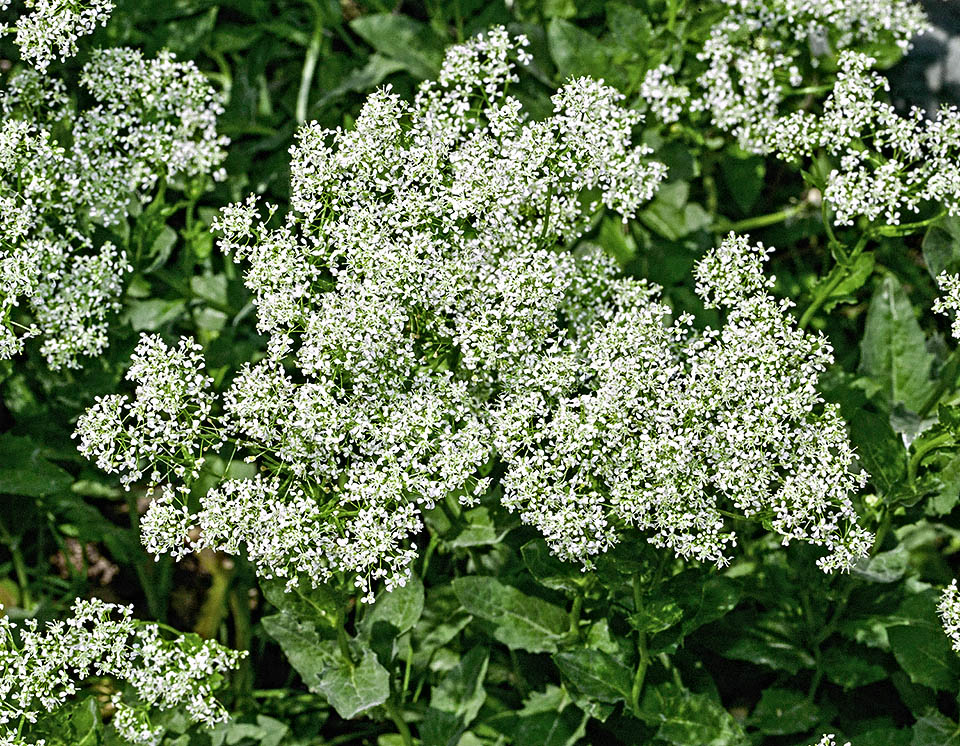 Now it is naturalized in much of the world, fit as it is for any climate, from sea level up to 1520 m of altitude in the Alps and 4200 m in the Asian plateaux © Giuseppe Mazza

In Great Britain Lepidium draba it was introduced around 1802 in the port of Swansea, possibly as junk. In 1840 it reached the area around Newhaven, together with the imported wheat seeds. In 1887 it was present in several parts of southern Great Britain’s parts, in the eastern countries and in Wales. In North America the plant has been probably introduced by the European farmer together with alfalfa seeds or the junk of the ships. In Canada, it was reported in 1878 and in the USA, in Long Island (New York), in 1862.

Lepidium draba is a perennial herbaceous plant, glabrous or with simple hairs, up to 60-80 cm tall, provided with rhizomatous roots, of brown colour, vertical (they reach a depth of 75-80 cm) as well as horizontal from which originate the rosettes of leaves. 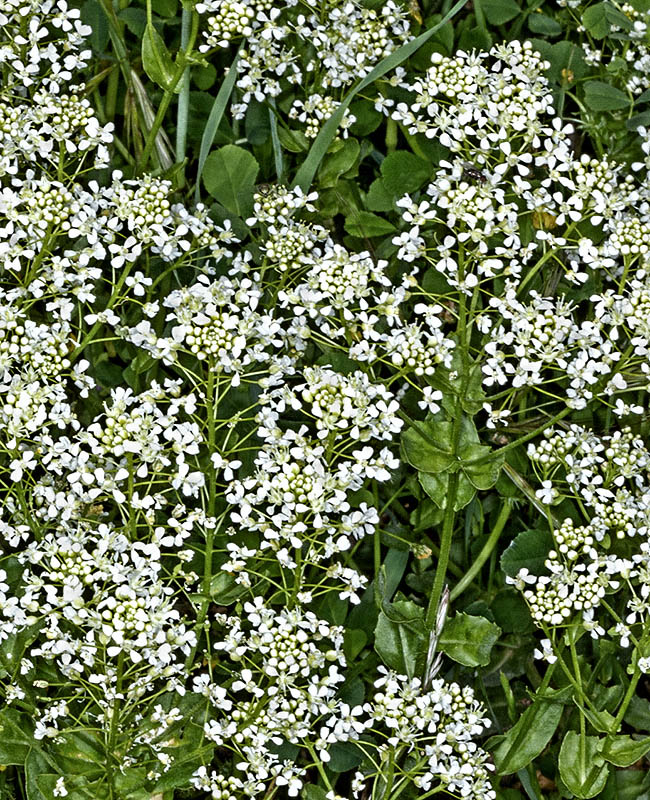 The inflorescence is a raceme like a flat corymb. The fruits are 3-4 mm silicles, glabrous, covered by tiny scales, bilobate and obcordate. A ripe plant can produce 1.200 to 4.800 seeds vital in ground for about two-three years © Giuseppe Mazza

They vary from spatulate to strictly obovate, at times lirate-lobate.

They are 4 to 10 cm long and 1-4 cm broad, normally petiolate, with entire or toothed margin.

From the centre of the rosette the stems rise, sub-glabrous or grey-pubescent, simple, ramified on top.

The upper leaves, hairy or glabrous, are lanceolate with little toothed margin, 1-5 (-8) cm and 1-3 cm broad, alternate, sessile, semi-amplexicaul with biauriculate base.

The inflorescence is a raceme similar to a flat corymb with flowers supported by 2-10 mm long pedicels, more or less patent on the fruitification.

The flowers are hermaphrodite, actinomorphic with four white spatilate petals, clawed, 3-5 mm long and sepals, about a half of the petals, (1,5-2,5 mm), glabrous, deciduous, of green colour at times with whitish margin.

The androecium is formed by six tetradynamous stamens with 2-3 mm filaments and ovate 0,4-0,5 mm anthers. The ovary is formed by 2 merged carpels. The style is 0,7-1,5 mm long.

The fruits are 3-4 mm silicles, glabrous, covered by tiny scales, bilobate in shape of reversed heart (obcordate), angusti septate due to the “replum” (false septum) perpendicular to the wider part.

The pollination is entomogamous (done by insects) but, sometimes, autogamous. Usually, the plant blooms from May to July and fructifies after one or two months but, in favourable climatic conditions, can produce seeds even in autumn.

The seeds, usually two (one per loculus) in each fruit, measure 1,5 x 1-1,2 mm, externally brown-reddish or dark brown with a longitudinal depression. The cotyledons are incumbent. The base chromosomic number is x=8 with gametophytes having n=16 and n=32 and sporophytes with 2n=62 and 2n=64. In Europe are diffused octoploid individuals, in western Asia, hexaploid and decaploid.

It is estimated that a mature plant may produce 1.200 to 4.800 seeds. The dissemination is anemochorous, that is done by the wind, and the seeds may remain vital in the ground for about two-three years. The species may reproduce vegetatively from fragments of the roots. In fact, the buds may form from those close to the soil, originating the rosettes, whilst the deep roots can produce new ones that move towards the surface.

Lepidium draba is an aggressive plant, as a matter of fact, it can form dense monocultures. 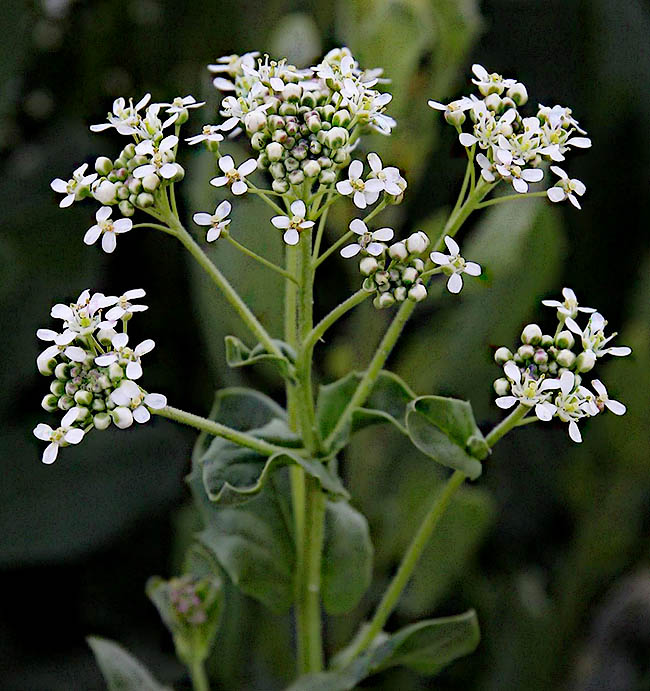 Thus it has become an invasive plant, allelopathic towards the surrounding species and difficult to eradicate © Mauricio Mercadante

It has been verified that one single plant may extend, in one year, on an area of 3,5 square metres.

Most of the biomass, about 76%, is found underground and the creeping and deeply penetrating roots render difficult its eradication.

Lepidium draba is a plant difficult to control with the normal cultivation techniques, it survives even mulching and the tillage of the land with the agricultural machinery, that, crushing the roots, favour its vegetative reproduction.

In the United Kingdom they make regular and frequent cuts of the aerial parts avoiding the production of seeds and in meantime reducing the reserves in the roots. Also in Canada they do this sort of control. The deep plowing, 40 cm at least, and the subsequent set aside of the land (fallow) can prove effective.

The plant invades also the natural environments representing a serious threat for the autochthonous species and for the ecosystems that get impoverished in biodiversity. Also the wild fauna is negatively affected by the presence of this plant.

In the traditional medicine Lepidium draba was utilized against a vast range of ailments as anti-inflammatory, antitumor, antimicrobial, antioxidant, hypoglycemic. In infusion, the seeds and the leaves were used as expectorant, purge and hypoglycemic (decrease in blood glucose level). Over the years its use has been reduced because deemed of limited effectiveness. Recently studies have been done on the contents of the aerial parts and alkaloids, saponins, flavonoids, terpenoids, tannins, triterpenoids and leucoanthocyanins have been found.

Moreover, in the buds and in the seeds are present allelopathic glucosinolates that serve the plant for hindering the growth of other nearby plants. In a study of screening for antimicrobial substances it has been noted that the extracts of aerial parts of Lepidium draba had a cytotoxic activity and did interfere with the metabolism of the nucleic acids of the bacteria. 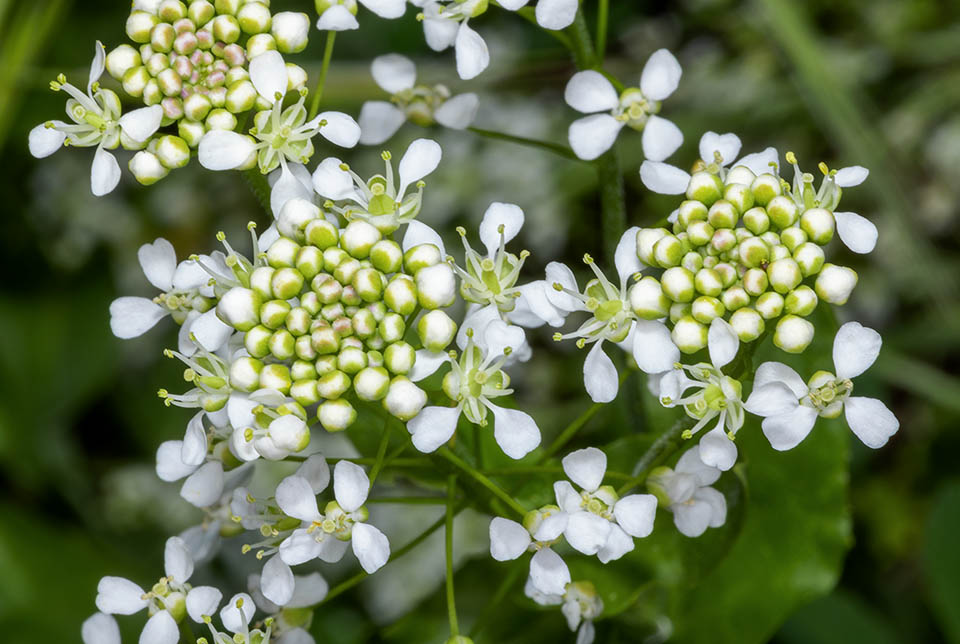 Always used in the traditional medicine, it shows on the other hand promising medicinal virtues and in Spain finds also culinary uses © Giuseppe Mazza

In fact, it has been proved that the plant shows an antibacterial activity on Staphylococcus aureus and Bacillus subtilis (Gram-positive) and on Pseudomonas aeruginosa and Escherichia coli (Gram-negative).

In Spain Lepidium draba is considered as a wild edible species and of high nutritional value. The young leaves and the buds are employed raw in salads, whilst the ripe leaves are cooked as aromatic herbs. The seed is used in the seasonings as a substitute for pepper.

Lepidium draba is suitable for being utilized as an ornamental plant, particularly in the gardens.