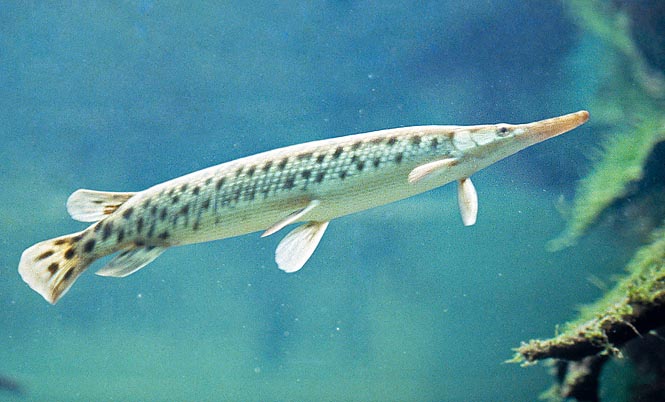 The Lepisosteus osseus is a living fossil, but is not an endangered species © Giuseppe Mazza

In the past, the order of the Amiiformes (Amiiformes Hay 1929), was very rich in species.

Several fossil forms have been found by the biologists (in the specific, by the ichthyopaleontologists) dating from the Permian period, Primary or Paleozoic era (299-251 million of years ago), in the Old as well as in the New World; the term “Permian”, comes from the layers of red rocks which occupy a vast area west to the Urals, in the old state of Perm, in Russia, by this period, or more precisely during its final part, corresponds to on e of the greatest mass extinctions in the history of the Planet Earth, the Permian-Triassic extinction.

Only two families of these fishes have survived till our days, without remarkable changes, in the American continental waters.

They are really living fossils, like the coelacanth or the lungfishes. Like their forefathers, they have remarkably ossified skeleton, cycloidal or ganoidal scales, bilobed swim bladder and a rudimental spiral-shaped valve in the intestine.

Some taxonomical biologists consider this order as sufficiently original, so much to be able, perhaps, to form an independent subclass, inside the infraclass of the bony fishes Holostei (Holostei).

The Longnose gar, or Needlenose gar (Lepisosteus osseus), is afferent to the class of the Actinopterygians (Actinopterygii,) to the order of the Amiiformes (Amiiformes , other ichthyological biologists place it in the Semionotiformes), to the family of the Lepisosteids (Lepisosteidae) and to the genus (Lepisosteus).

It lives in the American Great Lakes region and in the waterways of eastern USA, of Central America and along the river Mississippi, in Alabama and in Texas, as well as in the swamps of Florida, where it reaches disproportionate numbers.

It can be met also in the lakes of the Quebec, French Canada, and in the southernmost part of Ontario, English Canada.

This fish spends hibernating the winter, on the bottom of the waterway where it lives, staying there motionless and ceasing to feed; during the summer it is a greedy predator, it nourishes of other fishes, molluscs and crustaceans, exploiting the ability to swim very fast and to move upstream in spite of impetuous currents, hunting in ambush, opening the mouth and, with a quick lateral movement of the head, catching the prey with its sharp teeth.

It is from a metre to a metre and a half long, has the upper part of the body greenish, dotted with more or less rounded dark spots; particularly visible in the young specimens and white belly.

During the summer, especially in the southern regions, when the concentration of the O2 in water decreases remarkably, frequently surfaces putting itself on a side and by opening the mouth it swallows a good volume of air, therefore of atmospheric oxygen, which will be stored into the bilobed swim bladder, which, being connected with the pharynx, allows the respiratory gas exchange.

The eggs, approximately of the same size as those of the salmon, are spawned among the seaweeds in spring, from late April to June-May. During this period, the female moves towards the banks where the waters are shallower and calmer and are present aquatic plants. Once there, followed by several males, the ritual forms of struggle take place for the conquest of the female. The greenish eggs, are fecundate externally, the small larvae get out from the fecundated eggs after about 13 days, anchor they too on the aquatic plants, by means of a buccal cup, nourishing of the reserve material stocked into the yolk sac.

By mid development, seven days about, which coincides with the halving of the yolk sac, the vertebral column elongates in one of the two lobes (the upper one), of the caudal fin, rendering the same “heterocercal”; after 14 days of this type of life, the larvae are capable to carry on an independent life and to swim.

During all this time, the parents have completely ignored their progeny.

As an average, it lives 18-20 years and for the International Union for Conservation of Nature (IUCN), it is absolutely not, to date, an endangered species.