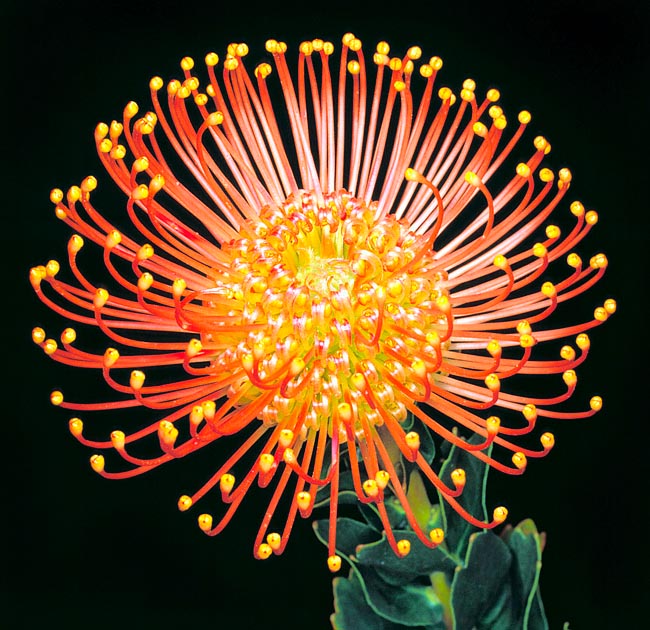 The species is native to South Africa where it grows on rocky slopes in a limited area of the extreme south of the Province of the Western Cape characterized by a Mediterranean type climate with mild and humid winters and warm and dry summers.

The Leucospermum cordifolium Fourc. (1932) is an evergreen shrub, up to about 1,5 m tall, with more or less horizontal branches and simple leaves spirally arranged, coriaceous, oval with base at times cordate and apex equipped with 1-6 teeth, 2-8 cm long, of grey-green colour.

Terminal inflorescences solitary or in groups of 2-3 of 10-12 cm of diameter, subtended by an involucre of short imbricate bracts, carrying a crowd of orange to scarlet flowers, with perianth formed by 4 petaloid tepals, of which one is free and three are fused together, and style, 5-6 cm long, curved, rich of nectar which attracts insects and birds who carry the pollen from a plant to another.

The fruits are achenes covered by a fleshy pellicle (elaiosome) particularly appreciated by the ants who favour its dispersion. It reproduces by seed, previously kept immersed in water for 3-4 days in order to remove the surface layer, in particularly draining sandy loam, sterilized, kept humid, at a temperature of 18-20 °C, with the first blooming by the third year of age, and by semi-woody cutting. 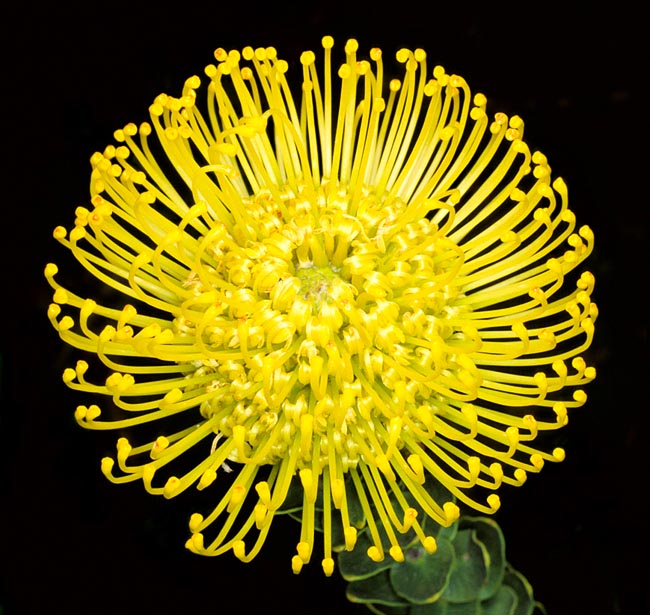 Usually they are orange-scarlet, but a yellow variety also exists © Giuseppe Mazza

This is the most known and cultivated species of the genus, along with its numerous hybrids and varieties that have been selected, but with a rather short life, its renewal is usually suggested after 8-10 years, cultivable in full sun in the temperate climate zones of Mediterranean type, not suitable for zones with warm and humid summers where it is easily subject to rottenness; adult plants may stand sporadic lowest values of temperature up to about -3 °C and drought periods.

It requires perfectly draining soils, sandy or stony, slightly acidic, poor, in particular of phosphorus, therefore the fertilizers are to be avoided; it is particularly sensitive to the water stagnations who favour deadly fungal attacks to the rooting apparatus, in particular by the Phytophthora cinnamomi.

Of great ornamental and landscape value, as isolated specimen, in mass or in mixed bordures in parks and gardens, it adapts also to the cultivation in pot, which must be capacious, on a substratum having the aforementioned characteristics, avoiding any material which may keep the humidity for long time.

The inflorescences are long-lasting on the plant as well if cut and for this reason they are amply used in the floral compositions, extensive cultivations are present also outside from the origin places, in locations having a Mediterranean type climate, and exported in various parts of the world.