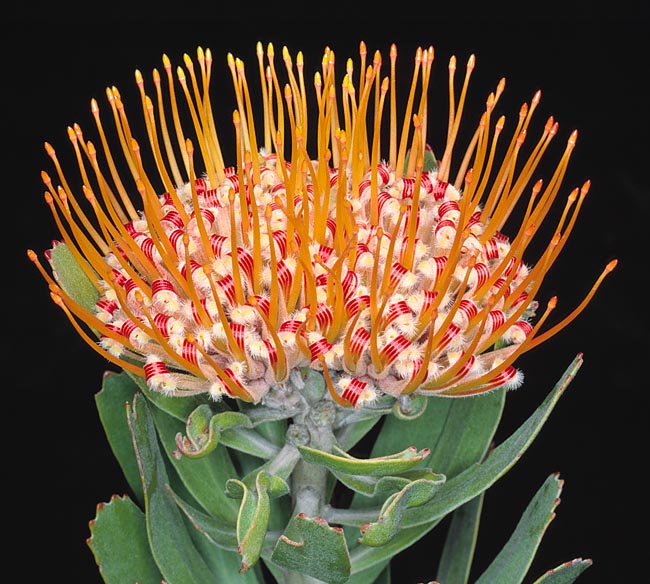 The species is native to South Africa where it grows in the Province of Western Cape on the northern rocky slopes of the Langeberg Mountains, between the 500 and 650 m of altitude, characterized by mild and little rainy winter climate and warm and dry summers.

The Leucospermum erubescens Rourke (1972) is an evergreen shrub up to about 2 m tall with erect branches and simple sessile leaves spirally arranged, coriaceous, oblong-lanceolate with apex truncated and usually provided with 3 teeth, 5-8 cm long and 1-1,5 cm broad, of grey-green colour.

Terminal inflorescences of 5-6 cm of diameter in groups of 2-8, on an about 2 cm long peduncle, subtended by an involucre of short imbricate bracts, carrying a crowd of flowers with perianth formed by 4 petaloid tepals, externally yellow, with the time tending to reddish orange, red internally, which at the opening fold back exposing the inner part, and style, about 3 cm long, of orange yellow colour; the nectar, abundantly produced, attracts insects and birds which then carry the pollen from a plant to another one.

The fruits are achenes covered by a fleshy pellicle (elaiosome) particularly appreciated by the ants which favour their dispersion. It does not resist to the fire, having no lignotuber, the upper part of the root, enlarged and lignified, which allows the plant to regenerate after a fire, its survival is therefore linked to the seeds whose germination is favoured by such circumstance.

It reproduces by seed, previously kept immersed in water for 3-4 days in order to remove the superficial layer, in particularly draining sandy loam, sterilized, kept humid, at a temperature of 18-20 °C, that germinates in 1-2 months, with the first blooming starting from the third year of age, and by semi-woody cutting with bottom heat.

Species native to a restricted and arid area, appreciated for its ornamental foliage and the bright long-lasting inflorescences on the plant, about 2 months, requires an exposition in full sun and perfectly draining soils, sandy or stony, acidic and poor, adult plants may stand sporadic lowest values of temperature up to about -4 °C and long drought periods.

Particularly suitable for rocky gardens where, well rooted, requires little cares. It adapts also to the cultivation in pot, provided rather capacious, with substrata having the aforementioned characteristics, carefully avoiding water stagnations. The inflorescences are long-lasting also when cut and for such reason are utilized in the floral compositions.