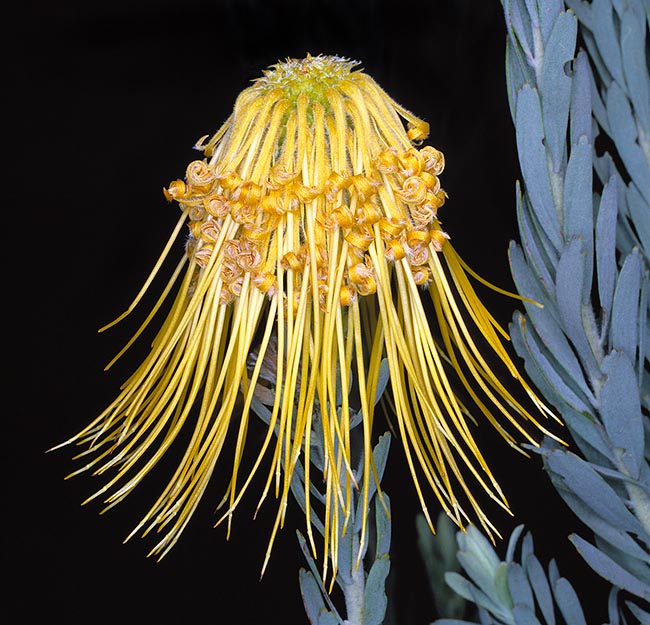 The species is native to South Africa where it grows in the Province of Western Cape on the Cedarberg Mountains, characterized by a climate with cool and humid winters and warm and dry summers, mainly close to water streams.

The Leucospermum reflexum H.Buek ex Meisn. (1856) is a shrub or small evergreen tree, up to about 4 m tall, with densely villous young branches and simple sessile leaves spirally arranged, coriaceous, elliptic to oblanceolate, of grey-green colour and covered by a thick grey down, 3-5 cm long and 0,5-1,5 cm broad, with 2-3 glandular teeth at the apex.

Solitary terminal inflorescences, of 8-10 cm of diameter, subtended by a casing of short imbricate bracts, carrying a crowd of flowers, initially erect, then bent downwards, formed by a tubular perianth formed by 4 petaloid tepals and a long dark orange to crimson style, rich of nectar which attracts the pollinators, especially birds. The fruit is an achene, about 0,8 cm long, covered by a fleshy pellicle (elaiosome) particularly appreciated by the ants which favour its dispersion. It reproduces by seed in sandy, particularly draining loam, or directly interred in autumn, a daily thermal excursion of about 10 °C favours its germination; the blooming takes place starting from the third year of age.

Species of great ornamental effect due to the foliage and even more to the unusually shaped inflorescences, cultivable in full sun in the temperate climate zones of Mediterranean type, with mild and humid winters and warm and dry summers, not suitable for zones having warm and humid summers where it is easily subject to rottenness; adult plants can bear sporadic lowest values of temperature up to about -4 °C and drought periods.

It requires soils particularly draining, sandy or stony, slightly acidic, poor, in particular of phosphorus. The prunings are useful, to be done after the blooming, for a more compact and well tufted habit.

It adapts also to the cultivation in pot, which must be rather capacious, with substrata having the previously mentioned characteristics. The inflorescences are long-lasting even if cut and for such reason are used in the floral compositions.

Leucospermum reflexum was last modified: May 1st, 2018 by Giuseppe Mazza