The species is native to south-eastern Australia (New South Wales, Queensland and Victoria), where it lives mainly in the humid forests from the sea level up to about 1000 m of altitude.

The species was dedicated to Patrick Murray, Baron of Livingston, who destined in 1670 his collection and his garden to botanical garden, which then became the present ‘Royal Botanic Garden Edinburgh’; the name of the species is the Latin adjective “australis, e” = austral, southern. 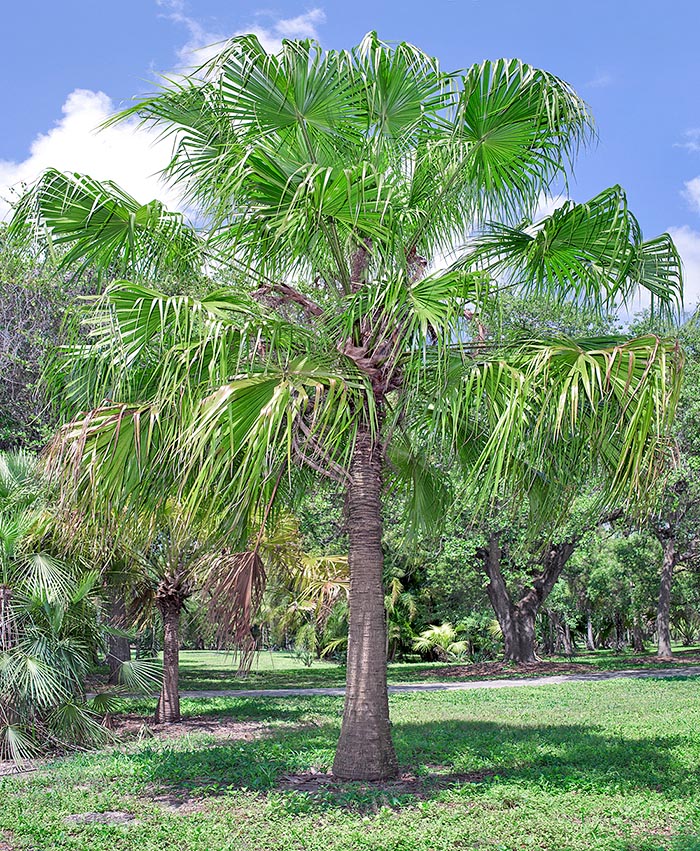 Native to south-eastern Australia, the Livistona australis is cultivable also in the Mediterranean climate © Giuseppe Mazza

The Livistona australis (R.Br.) Mart. (1838) is a monoecious species with hermaphroditic flowers, solitary, with erect stem enlarged at the base, up to about 30 m tall and of 25-35 cm of diameter at 1-2 m from the soil; vertically fissured, of brown colour with the annular traces of the foliar scars and the residues of the bases of the petioles that remain long time.  The leaves are slightly costapalmate, corrugated, almost circular, 1,1-1,3 m long and 1-1,5 m broad of intense green colour and glossy above, slightly paler below, divided into 70-90 segments, 3-5 cm broad, united at the base per about half or little less of their length, the free part is in its turn divided around the mid in two linear-lanceolate segments with acute apex slightly divergent and drooping vertically.

The petioles, 1,5-2,5 m long and about 6 cm broad at the base and 2 cm at the apex, of green colour with purple brown hues at the base, are provided in the lower half of short blackish brown spines more or less retroflexed of decreasing length, almost unarmed in the remaining part; the foliar base falls apart for a good part in a fibrous mass surrounding the stem.

Inflorescences between the leaves (interfoliar), less long or almost equal than the petioles, of cream colour, with ramifications of fifth order and several rachillae with tiny sessile hermaphroditic flowers, solitary or in groups of 2-4, with 6 stamens united at the base and 3 carpels free at the base and united at the apex to form a unique style with trilobate stigma.  It has been observed that in the populations in nature there are plants fructifying and others not, even if there are no differences among the flowers, this might lead to think about a certain “de facto” dioecious behaviour that ought to be furtherly investigated.

It reproduces by seed, previously kept in water for three days, in draining organic loam maintained humid at the temperature of 24-26 °C, with germination times from 1 to 3 months. 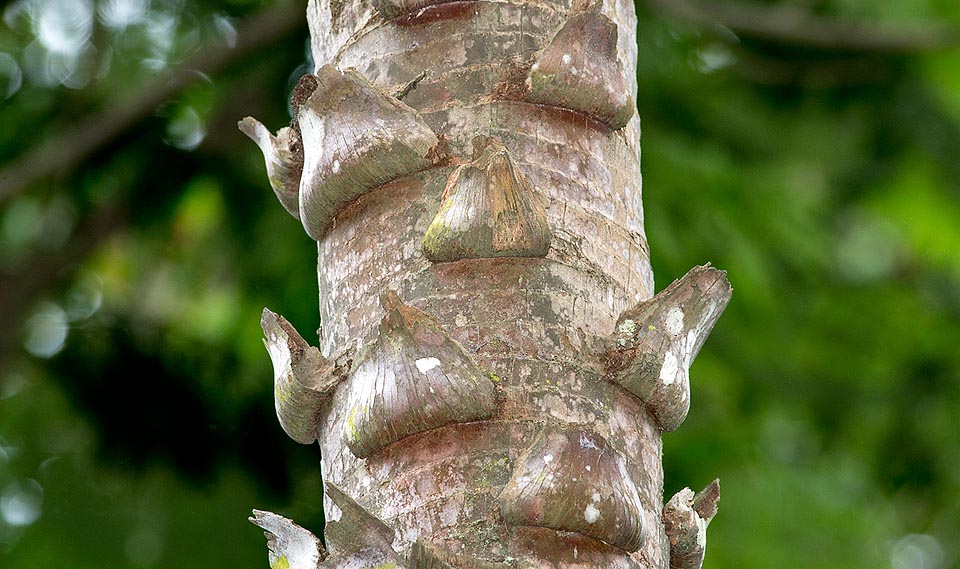 The even 30 m tall trunk with a diameter of 35 cm, shows the rings of the foliar scars and the residual bases of the petioles that persist long time © Giuseppe Mazza

The Livistona most diffused in nature and amongst the most cultivated, in particular in the regions with temperate climate, like those of Mediterranean type, where it can resist, when adult, to temperatures up to about -6 °C, if exceptional and short lasting. Of easy cultivation and of remarkable elegance, as isolated specimen as well as in group or lined along the margins of roads and alleys, requires full sun or a slight shade, in particular during the first years of life, it adapts to various types of soil, slightly acidic to slightly alkaline, even if preferring the draining ones rich of organic substance maintained almost constantly humid. It bears moderately the saline sprays and short periods of drought, but for getting a luxuriant look it is good to water it regularly in the climates characterized by long warm and dry summers.

The vegetative apex is edible (but causes the death of the plant) and was consumed in the past by some aboriginal tribes as vegetable.