The species is native to Djibouti, northern Somalia and southern Yemen where it lives, with a limited number of specimens, in rocky semiarid areas at the margins of sources and creeks (wadis), between the 200 and 1000 m of altitude.

The genus was dedicated to Patrick Murray, Baron of Livingston, who destined in 1670 his collection and his botanical garden as botanical garden, which then became the present ‘Royal Botanic Garden Edinburgh’; the specific Latin name “carinensis” = of Carin, refers to the oasis of Somalia where the type species has been found.

The Livistona carinensis (Chiov.) J.Dransf. & N.W.Uhl (1983) is a monoecious species with hermaphroditic flowers, solitary, with erect stem dilated at the base, 20-30 m tall and of up to about 40 cm of diameter, of greyish colour with the annular traces of the foliar scars and the residues of the bases of the petioles persisting in the lower part, up to a height from the soil of about 2 m. The leaves are costapalmate, corrugated, almost circular, 80-90 cm long, of green grey colour and covered by a thin waxy patina on both sides, divided in 50-70 rigid segments, 2,5-3 cm broad, united at the base for about 1/4 of their length, the free part is in its turn divided up to about the half in two linear-lanceolate segments with acute apex. The petioles, 1-1,3 m long and 2-4 cm broad, are of yellowish green colour excepting the blackish brown base, are provided of blackish brown spines irregularly arranged and usually curved, up to 2 cm of length, decreasing towards the apex; the foliar base for a good part degenerates in a fibrous mass surrounding the stem. Arcuate inflorescences between the leaves (interfoliar) with thin ramifications of third order, just exceeding the foliage, of yellowish colour, with several rachillae and tiny hermaphroditic flowers, solitary or in groups of 2-5, with sepals and petals provided of sparse and short hairs, 6 stamens united at the base and 3 carpels free at the base and united at the apex forming a unique style with trilobate stigma. 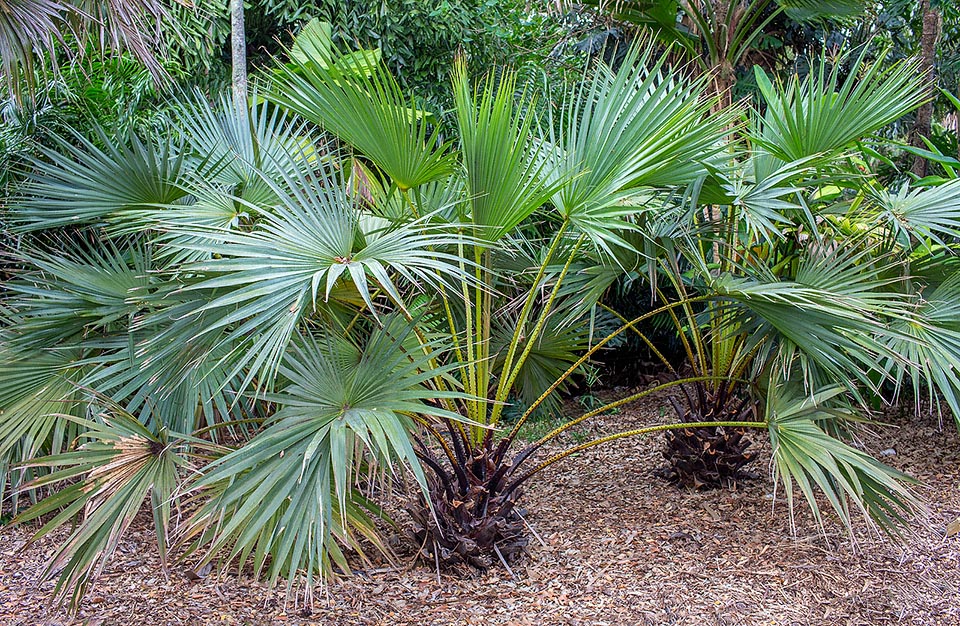 Globose fruits of 1-3 c of diameter, of blackish brown colour when ripe, containing only one globose seed, of about 0,5-2 cm of diameter.

It reproduces by seed, previously kept in water for three days, in sandy loam maintained humid at the temperature of 26-28 °C, with germination times of 1-3 months.

Species found completely isolated in Africa and in Arabia from all the other Livistona, proof of a bigger diffusion of the genus in respect to the present one, and unluckily at serious risk of extinction. Despite coming from one of the warmest zones of the planet it has proved to be adaptable also to the warm temperate climate like the Mediterranean one, where it can resist, when adult, to temperatures up to about -2 °C, if exceptional and short lasting. It requires full sun, and adapts to various types of soil, slightly acidic to slightly alkaline, provided draining; it moderately bears the saltiness and when adult short dry periods, but gets advantage from regular watering in the climates having long periods of drought, as in nature it grows close to the water.

In the past the stems have been utilized in the constructions, and still are so in limited measure, one of the main causes of its steady decline, and the leaves as cover of the rural dwellings and for fabricating mats, nets, bags and other objects of common use.

Due to the reduced number of specimens, of the progressive reduction of its habitat, of the indiscriminate collection of the leaves and of the pastoralism, that prevents its natural regeneration, the species has been inserted in to the red list of the IUCN (International Union for the Conservation of Nature) as “endangered” (at very high risk of extinction in nature in the next future).