Livistona endauensis J. Dransf. & K.M. Wong is native to Malaysia, where it is present in only two specific centres, in the forests of Ulu Endau, in the southern state of Johor, and on the hills of Bukit Bauk, in the eastern state of Terengganu, from 90 to 660 m of altitude.

The genus Livistona has been honoured by Robert Brown to the explorer Patrick Murray, baron of Livingstone (1632-1671), collector and amateur botanist, whose plants formed the original nucleus of the Edinburgh Botanic garden, created in his park. The name of the species endauensis refers to the location where the species has been discovered, Ulu Endau. 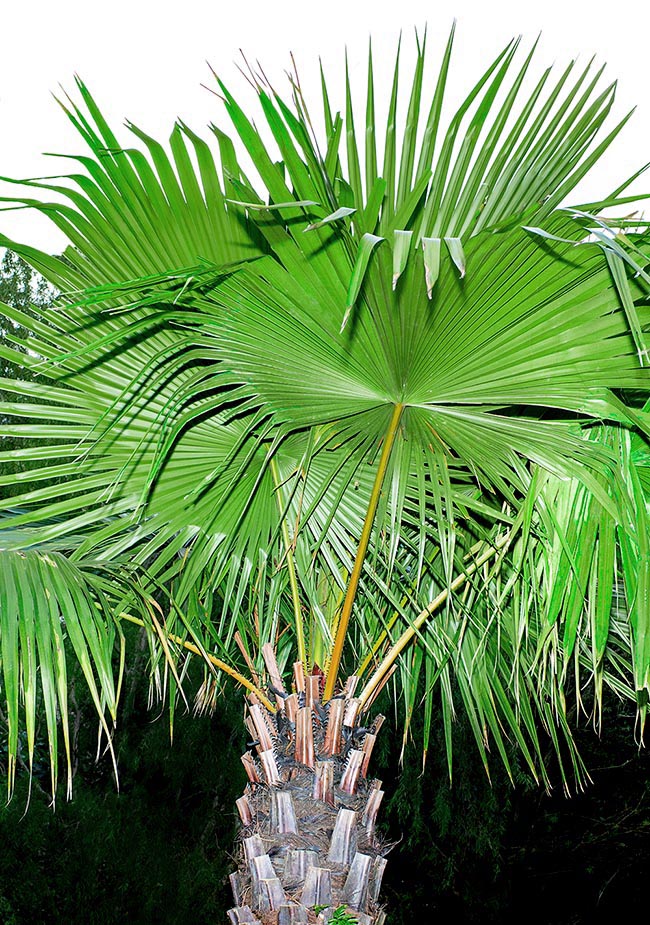 Native to Malaysia, Livistona endauensis is an only in 1987 discovered palm still partly known in cultivation © Giuseppe Mazza

Livistona endauensis is a species of medium dimensions with a solitary stem, straight and thin, up to 15 m tall and up to 20 cm broad, marked by little deep vertical fissures. In the young specimens the bases of the petioles of the fallen leaves do persist on the stem for some time.

The foliar crown is globose and is very dense, formed by 60-80 leaves, in the adult specimens. The leaves are up to 1 m long and have an almost completely circular shape, with flat or slightly corrugated lamina, of bright green colour on the upper pagina, and paler green in the lower one. The lamina is divided in 60-70 segments, 2-3 cm broad, united at the base per about 60% of their length, the apex, rigid or more rarely drooping, divided and bifurcated in the terminal part.

The petioles are up to 1,8 m long, of yellowish green colour, covered by a thin, grey indumentum, deciduous. The margins of the basal part are covered by curved and retroflex black thorns, up to 1,4 cm long, tending to decrease in number and dimensions till disappearing in the terminal part. The base of the petiole breaks up in a mass of brown fibres wrapping the stem. In the point of intersection between petiole and foliar lamina, above, is placed a thick, vertical, small slide, about 1 cm tall, crescent-shaped.

The inflorescences are interfoliar, arcuate, shorter than the leaves, up to 1,5 m long, with an about 60 cm long peduncle. They are ramified on 3 orders, with about eight ramifications per order, up to 35 cm long. The hermaphrodite flowers are solitary or in clusters of 2/3, sessile, about 1 mm tall and 1,5 mm broad, of golden yellow colour.

The fruit has an ovoid or pyriform shape and is smooth, about 1,6 cm long and 1,4 cm broad, of bluish green colour when ripe. It contains one globose seed, of above 1 cm of diametre.

Discovered only in 1987, this species is still little known in cultivation and is rarely found in the botanic or private gardens. Thanks to the dimensions smaller than those of other congeneric species present in the same area, like Livistona saribus, it would be more suitable for the cultivation in the tropical and subtropical countries gardens, where the temperature never drops under the 0 °C. It prefers shady positions when young to then later adapt in sunny positions when adult. It adapts to various types of soils, but prefers the substrata rich in organic substance maintained constantly humid.

Livistona endauensis is classified as ‘Near Threatened”, species close to the menace, by the International Union for the Conservation of Nature (IUCN), due to its distribution in only two territories of the Malay peninsula and to the limited number of adult specimens still present.