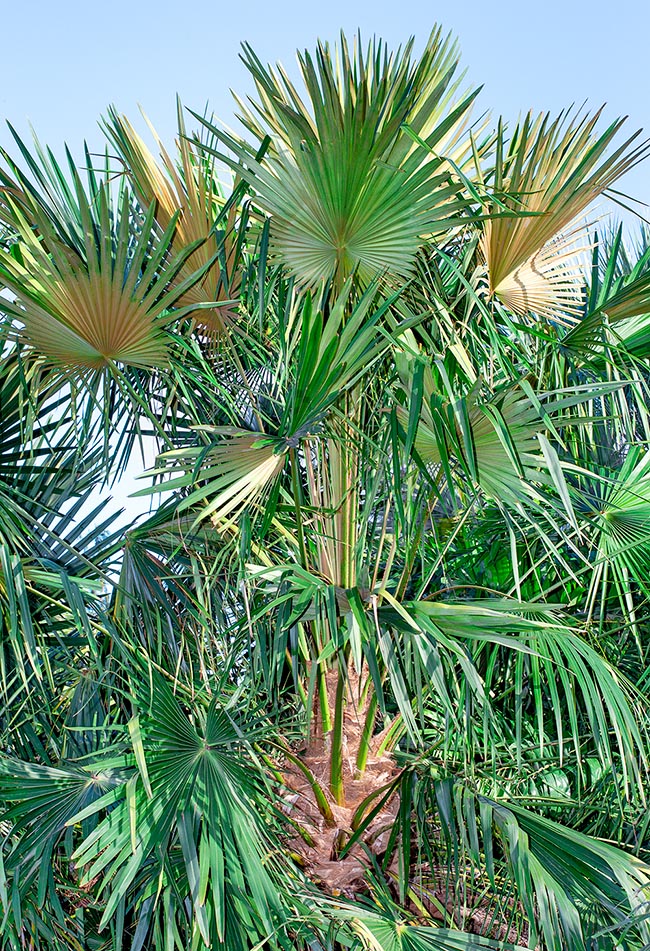 As its scientific name hints, the Livistona fulva is a palm with reddish lowest page of the leaves © Giuseppe Mazza

The species is native to Australia (central-eastern Queensland), where it lives in the open forest of eucalypti on the summit and the slopes of the Blacdown Tablelands. It grows on rocks of sandstone mainly in ravines and gorges close to waterfalls and waterways, between 300 and 900 m of altitude, in climatic conditions cooler and more humid than those of the surrounding areas of the tableland.

The genus was honoured to Patrick Murray (1632-1671), baron of Livingston, lover of botany, whose private collection formed the base of the ‘Royal Botanic Garden Edinburgh’ founded in 1670; the specific name is the Latin adjective “fulvus, a, um” = fawn, reddish blond, with reference to the colour of the indumentum covering the lowest pagina of th leaves.

The Livistona fulva Rodd (1998) is a monoecious species, solitary, with cylindrical stem slightly enlarged at the base, of greyish colour, wrinkled, vertically fissured, devoid of the residues of the fallen petioles in the oldest part, 8-16 m tall and of 20-30 cm of diameter, and more or less globose crown.

The 1,6-2,2 m long and 5-6 cm broad at the base petioles, are provided in the lower part of robust close thorns, retrorse, of blackish brown colour, of decreasing length, unarmed or with small protuberances in the upper half.

Almost circular leaves, flat, slightly costapalmate, 1-1,5 m broad, coriaceous, subdivided in 60-70 acuminate segments, rigid, fused at the base per about half of their length and bifurcated at the apex for a short distance, glabrous and of green grey colour above, bluish green below and covered by a brown orange indumentum, thicker in the newly open leaves.

Ramified between the leaves (interfoliar) inflorescences, shorter than the same, with yellow hermaphrodite flowers, solitary or united in groups of 2-3. Globose fruits, of 1,2-1,5 cm of diameter, blackish when ripe and covered by a glaucous pruina, containing only one globose seed of 1-1,3 cm of diameter.

It reproduces by seed in particularly aerated and draining loam maintained humid at the temperature of 26-28 °C, with germination times starting from one month. 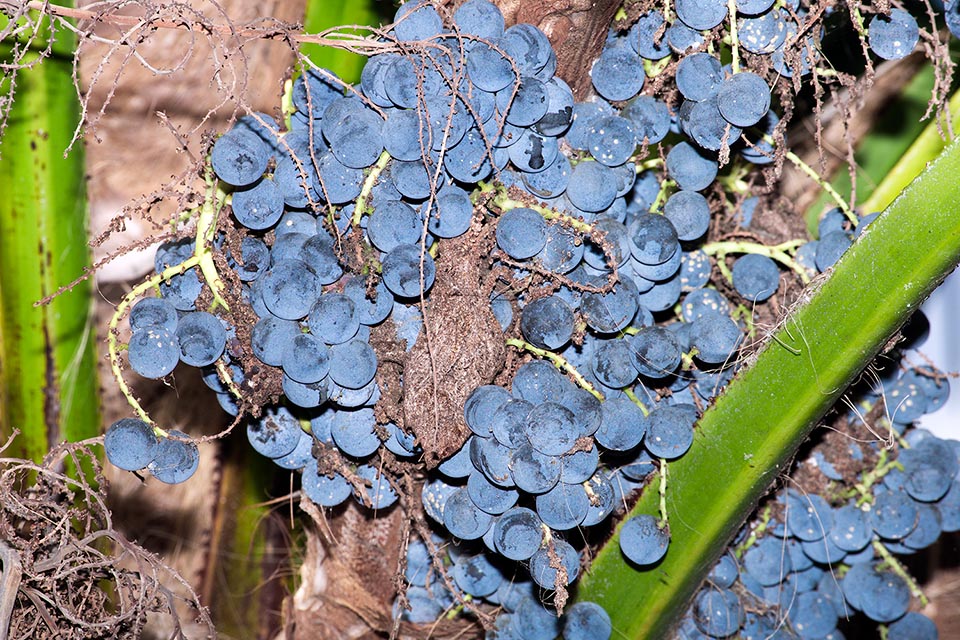 It grows in Australia, between eucalypti, in central-eastern Queensland, and the fruits, blackish when ripe, are covered by glaucous pruina © Giuseppe Mazza

Introduced in cultivation before its description with the name of Livistona sp. ‘Blackdown’, distinguishes from all others due to the particular colour of the lowers page of the leaf, which renders it one of the most ornamental of the genus.

Rather slow-growing palm, it adapts to be cultivated in the tropical subtropical and the mildest warm temperate climate regions, where it can stand lowest temperatures up to -3 °C for short time, possibly with damage to the foliage. It requires full sun, but in the juvenile phase when needs a slight shade, and is not particularly demanding about the soil, provided perfectly draining. Regular irrigations, in the climates characterized by long period of dry warm, and fertilizations contribute in speeding up its growth.