The species is native to Australia (Northern Territory) where it lives in a restricted area almost at the center of the continent in the desert, the Palm Valley, at about 500 m of altitude, along the riverbed of the Finke, usually dry, on sandstone rocks in presence of ground waters.

The genus was dedicated to Patrick Murray, Baron of Livingston, who destined on 1670 his collection and his garden to botanical garden, later on become the present ‘Royal Botanic Garden Edinburgh’; the species was honored to the Grand Duchess Marija Aleksandrovna of Russia (1853-1920), then (1874) Duchess of Edinburgh.

The Livistona mariae F.Muell. (1878) is a monoecious species with hermaphroditic flowers, solitary, with erect stem, 20-25 m tall and of about 40 cm of diameter, dilated at the base up to 70 cm, fissured vertically, of greyish color with the annular traces of the foliar scars and the residues of the petioles remaining long time in the basal part up to about 2 m of height. The leaves are costapalmate, semicircular to almost circular, slightly wavy, of 1,5-2,5 m of diameter, of green grey and glossy above, paler and covered by a waxy patina below, divided up to almost the half in 50-80 rigid segments, in their turn divided for about half of their length in two linear-lanceolate segments with acuminate apex, more or less drooping, slightly divergent to overlayed. 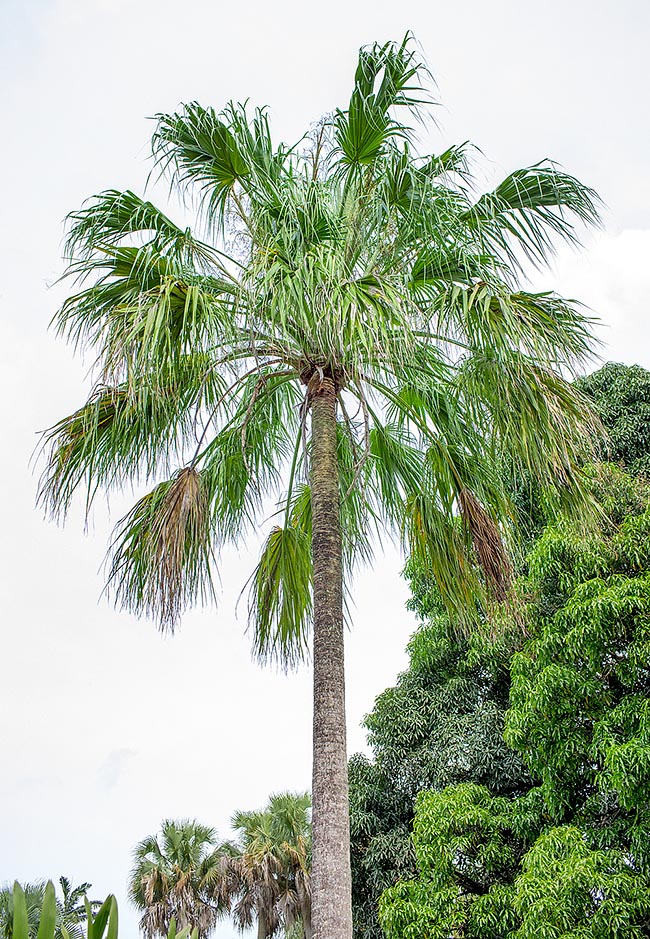 The Livistona mariae grows only in a limited area in central Australia, far for some hundreds of kilometers from any other species of palm, along the bed of the river Finke, usually dry, on sandstone rocks in presence of subterranean waters. This leads to think that in remote times the diffusion of the Arecaceae in the Australian continent was much vaster than the present and that this surviving plant should be the proof of a much more humid climate © G. Mazza

The young plants in full sun have an intense reddish color that decreases progressively with age. The petioles, erect or curved, 1,5-2,2 m long and 3-4 cm broad, of yellowish green color, are provided in the lower half of reddish brown spines of decreasing length, almost armless in the remaining part; the foliar base degrades for a good part in a mass of cream coarse fibers surrounding the stem. Inflorescences between the leaves (interfoliar), 1-2 m long, ascending, of cream white to yellowish color, with ramifications of fourth order and several rachillae, 3-9 cm long, with tiny sessile hermaphroditic flowers, in groups of 3-6, with stamina united at the base and three carpels free at the base and united at the apex to form a unique style with trilobed stigma. Globose fruits, of 1,2-1,6 cm of diameter, initially green, then reddish and finally black when ripe, containing only one globose seed, of 0,8-1 cm of diameter.

It reproduces by seed, previously kept in water for three days, in sandy loam, draining, maintained humid at the temperature of 26-28 °C, with germination times of 1-3 months.

The species is one of the mysteries of the Australian flora, the areas where it grows is far some hundreds of kilometers from any other palm, it might hence represent, after some, the residue, thanks to the presence of water underground, of a much more wide presence of the Arecaceae in the territory in remote times, with a much more humid climate. After others, basing on genetic studies, the population should be on the contrary the outcome of a dispersion occurred in relatively recent times (between 15.000 and 30.000 years), possibly done by the natives, that the isolation and the particular environmental conditions have morphologically differentiated from the closest genetically species, the Livistona rigida Becc. (1921), geographically distant about 1000 km, even if the remarkable distance and the scarce importance this species has for the primitive populations raises several questions.

Of undeniable ornamental characteristics, in particular when young, it is cultivable in full sun in the tropical, subtropical and warm temperate climate zones, where it can resist to temperatures up to about -4 °C for a very short period. It adapts to different types of soil, provided perfectly draining, though preferring the sandy ones, and when adult may bear periods of drought, but grows faster if regularly watered in the climates characterized by warm and dry seasons, such as those of Mediterranean type. As plant in pot, when young, its use is limited to the decoration of outer spaces, needing full sun for assuming its characteristic red colour.