The species is native to Australia (south-eastern Queensland) where it grows close to water streams mainly on sandy and stony soils, between the 200 and 800 m of altitude.

The genus was dedicated to Patrick Murray, Baron of Livington, who destined in 1670 his collection and his garden to botanical garden, become later on ‘Royal Botanic Garden Edinburgh’; the specific name is the Latin adjective “nitidus, a, um” = sharp, shiny, with reference to its fruits.

The Livistona nitida Rodd (1998) is a monoecious species with hermaphrodite flowers, solitary, with erect stem, 20-30 m tall and of 25-35 cm of diameter, dilated at the base up to 50 cm, fissured vertically, of pale brown color with the annular traces of the foliar scars and the residues of the petioles persisting for long time up to about 2 m of height. Numerous leaves, slightly costapalmate and corrugated, almost circular, 1,4-1,7 m long, of bright green color, divided for about 2/3 in 60-75 rigid segments, in their turn divided for about 2/3 of their length in two linear-lanceolate segments with acuminate apex, more or less drooping, slightly divergent. 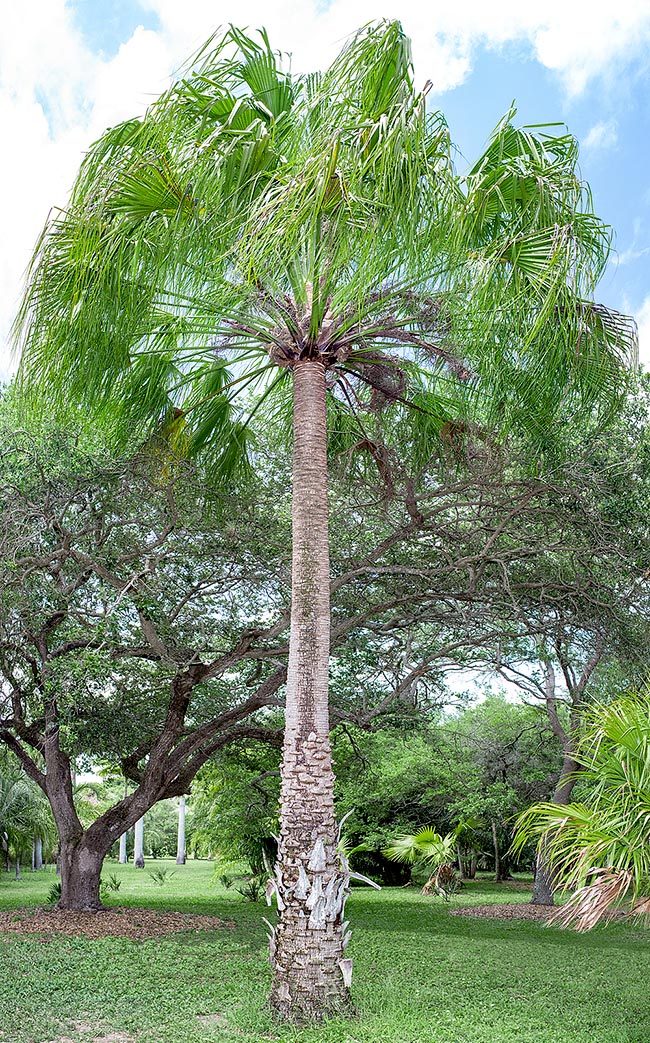 Native to south-eastern Queensland, in Australia, the Livistina nitida reaches 30 m of height with 25-35 cm of diameter, dilated at the base up to 50 cm. Of remarkable landscape effect, resists up to -8 °C © Giuseppe Mazza

The petioles, 1,5-1,8 m long and 2-3 cm broad, of yellowish green color, are provided in the lowest part of blackish brown conical spines of decreasing length, almost unarmed in the remaining part; the foliar base degenerates for a good part in a mass of coarse fibers of pale brown cooler surrounding the stem. Inflorescences between the leaves (interfoliar), 1,5-2 m long, arcuate, cream white to yellowish, with ramifications of fourth order and several rachillae, 5-20 cm long, with tiny hermaphroditic sessile flowers, in groups of 2-5, with 6 stamina united at the base and 3 carpels free at the base and united at the apex to form a unique style with trilobed stigma. Spherical fruits, of 1,5-1,8 cm of diameter, of glossy black colour when ripe, containing only one globose seed, of about 1 cm of diameter, of pale brown color.

It reproduces by seed, previously kept in water for three days, in sandy loam, draining, maintained humid at the temperature of 26-28 °C, with germination times of 1-3 months.

Superficially similar to the Livistona australis, it has been introduced in cultivation only during the second half of the XX century under the name of Livistona sp. ‘Carnarvon’, before being officially described, arousing quite soon the interest of growers and lovers, besides for its ornamental characteristics, for the ease of cultivation, the speed of growth and especially for its behavior at the low temperatures, proving to stand among the most resistant, if not for being absolutely the most one among the Livistona. In different situations the species has resisted without any, or limited damages, to temperatures up to -8 °C, and in some instance less with major damage, but recovering in the following season. It requires full sun or at most a slight shade during the first stages of life, is not particular concerning the soil, provided draining, slightly acidic to slightly alkaline, and can bear, when adult, short periods of drought, even if it gets advantage from regular irrigations in the climates characterized by long periods without rains and with high temperatures. Of remarkable landscaping effect as isolated specimen or in groups of varying heights in parks and large gardens or in rows of trees at the margins of alleys. Are not known particular uses by the natives, apart the utilization of the leaves as cover of makeshift shelters.