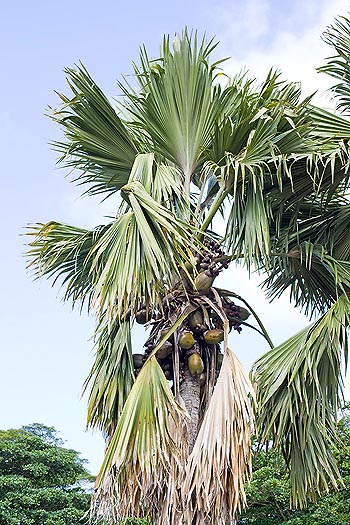 The etymology of the genus is not known, as it has not been specified by the author, the French naturalist Philibert Commerçon (1727-1773).

According to somebody, it comes from “Lodoicus” = Louis, with possible reference to Louis XV, King of France, for others, from the corruption of the name of the mythological character of Laodice, daughter of Priam, King of Troy.

The name of the species refers to the presumed place of origin, the Maldive Islands.

As a matter of fact, before its discovery in the Seychelles Islands, only the seeds of the plant were known, as, more or less decomposed and no more viable, but capable to float, they were carried by the sea streams on the beaches of the Maldive Islands.

The names under which it is more commonly known are: “coco de mer” (French); “double coconut” (English) and “Seychellenpalme” (German).

The Lodoicea maldivica (J.F.Gmel.) Pers. ex H.Wendl (1878) is endemic plant of the Seychelles Islands (in particular, it is presently located in the islands of Praslin and Curieuse), where it grows in the valleys or on the hilly slopes.

Palm with solitary trunk, which can reach a height of 34 m, with a diameter up to 50 cm, enlarged at the base.

The glossy green coloured leaves, on robust long petioles, are costpalmate, up to 10 m long and more than 4 wide, divided, for about one third of their length, in segments, at their turn, bifid at the tip.

Dioecious plant (each individual carries only male or female flowers), with hanging inflorescences which develop between the leaves.

The inflorescences carrying male flowers are simple or little ramified (2-3 spikes for each peduncle), long up to 1,8 metres and 6-8 cm thick, the female ones, usually shorter, are simple.

The fruits, which take about 7 years to ripe, are generally bilobate, about 35 cm wide and 50 long, with a weight up to 30 kg, of blackish colour when ripe. 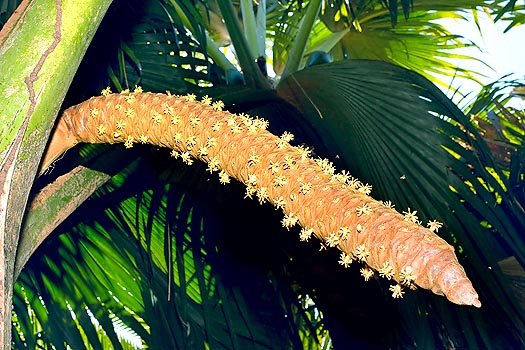 The seeds germinate in about one year and must have available a thickness of the soil of at least 1,5 metres, as the hypocotyl which develops from the seed, and on which extremity stands the germ which will originate the first leaf, goes down up to this depth.

The Lodoicea maldivica is palm rare in cultivation, not only for its imposing sizes and for the prohibition of exporting the seeds enforced by the local authorities (apart the non viable seeds, which are, on the contrary, matter of a rich trade), but also for the poor adaptability shown to conditions differing from the original ones, typically tropical.

→ The incredible Maldivian Lodoicea and the Vallée de Mai