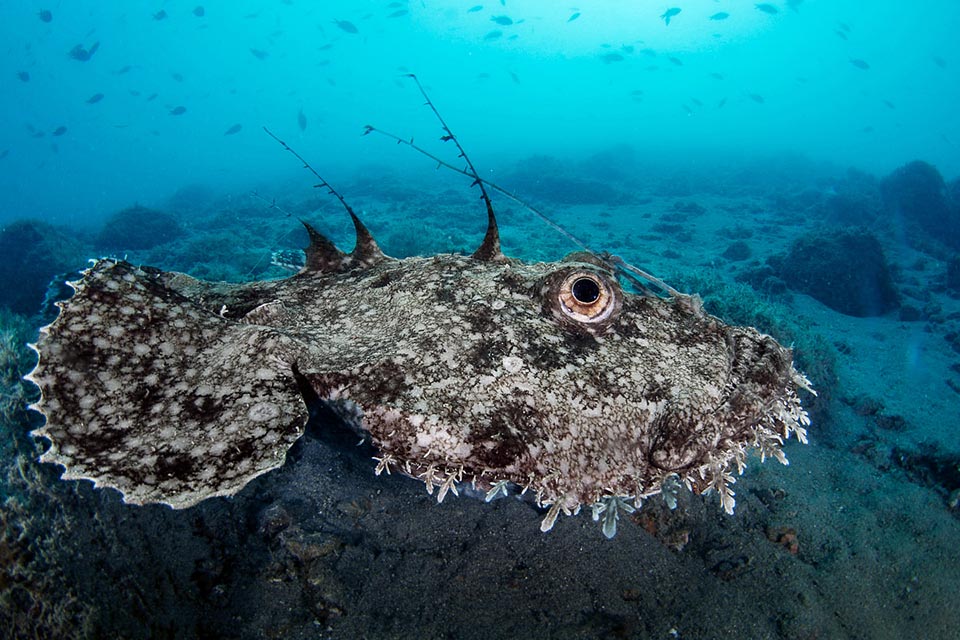 Present in eastern Atlantic, Mediterranean and Black Dea, the Frogfish (Lophius piscatorius) can be 2 m long. It is the biggest member of the order of Lophiiformes, fishes with ancient roots in Cenozoic and a huge mouth that attract the preys with a mobile fishing line placed on the head and baits luminescent in the abysses © Pietro Formis

Lophius piscatorius Linnaeus, 1758, vulgarly known as Frog fish, or Angler, belongs to the class of Actinopterygii, to the order of Lophiiformes, to which has given the name for notoriety and size, and to the family of Lophiidae, that has its roots in the Cenozoic and is nowadays present in all the seas thanks to its 4 genera and 28 species.

Peculiarity common to all these fishes is the first ray of the dorsal fin placed on the head and transformed in a mobile angler, called illicium, from the Latin “illicium”, to attract, bait to attract the curiosity of the passing by fishes that then are gulped  down treacherously by a huge mouth.

The generic epithet Lophius comes from the ancient Greek “λόφος” (lóphos), tuft, hackle, with reference to this particular organ, whilst the specific piscatorius reminds us in Latin that it is a fish that goes catching. 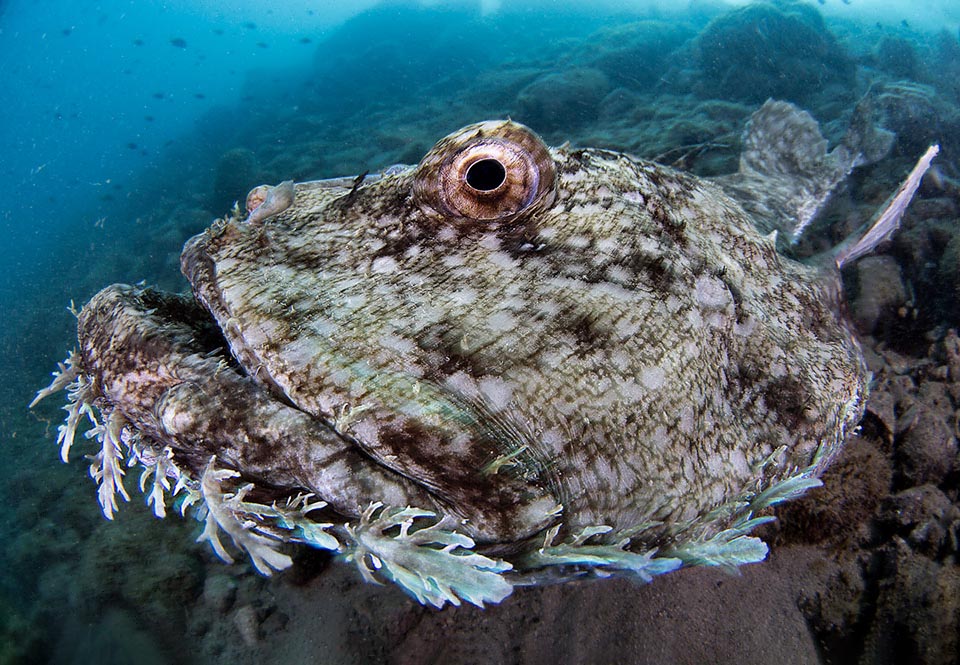 It can reach 60 kg, due for more than a half to the huge flat head. The outline is broken by several unusual ramified appendages, resembling algae, with mimetic function © Pietro Formis

The Frog fish is present in eastern Atlantic, from the coasts of Greenland and of Iceland to Mauritania, in the Mediterranean and in the Black Sea.

It is a decidedly benthic fish moving usually between 2 and 1000 m of depth, with catched reported even at 1800 m. It prefers the sandy and clayey bottoms, where it prefers, often partially buried in the soil, the preys, but also frequents rocky environments and the submerged prairies. It has been noted that the specimens of the northern Atlantic, that reach inter alia larger dimensions, are fished usually in shallower waters than those in Mauritania. 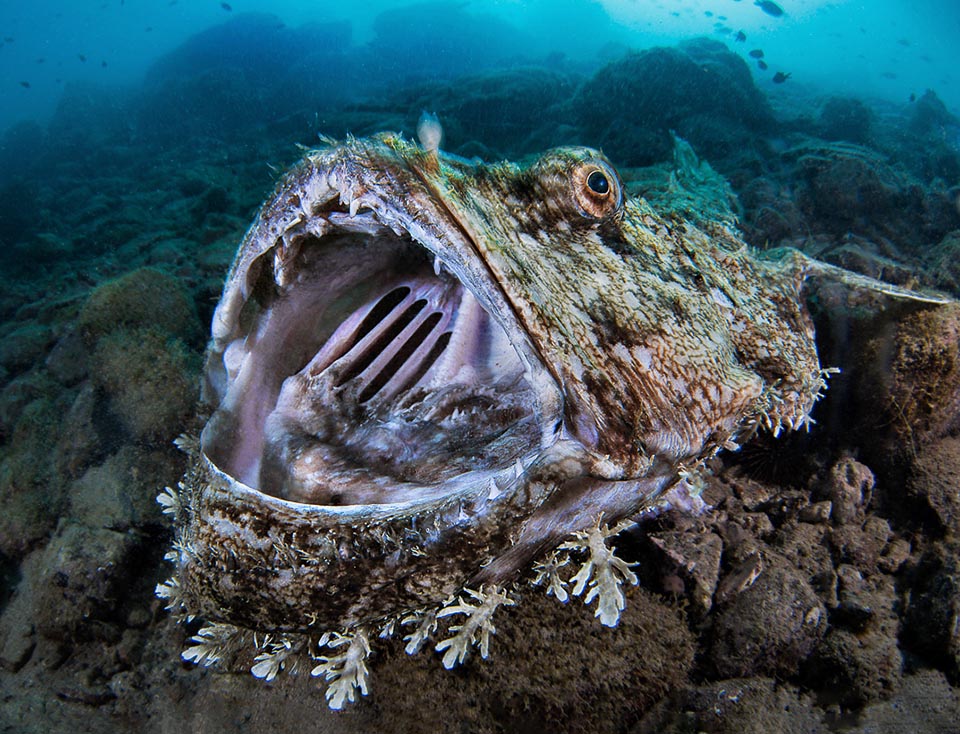 Here it is with wide open fauces. Its voracity is legendary: can swallow own size fishes and even gulls and other marine birds © Pietro Formis

Lophius piscatorius can reach the length of 2 m and nearly achieves the 60 kg, due for more than half to a huge flat head having a broken outline, as well as the fore part of the body, by several appendages similar to algae having a mimetic function.

The upper jaw is protractile, but when resting fits in the arch of the lower one that is protruding. The teeth, of various lengths, are robust, conical and acuminate. We count four rows of canines curved inwards to hold the prey. There are then other small teeth present inter alia on the vomer, palatines and pharyngeals.

The protruding eyes are relatively small, ellipsoidal, placed on the top and protected by a spiny orbit. 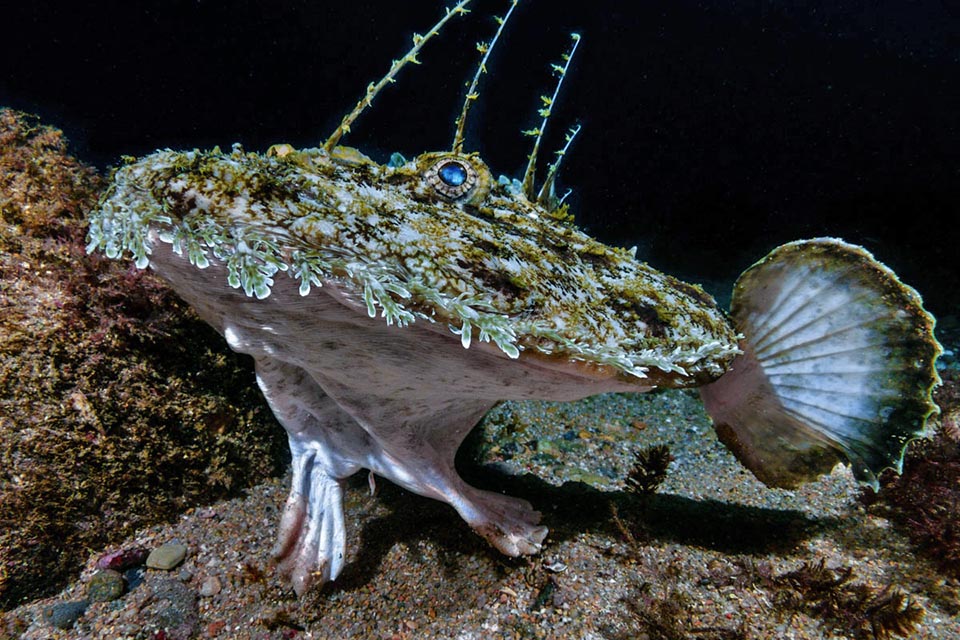 It can walk on the bottom raising of the pelvic fins transformed in limbs, helped by the large rotating pectoral fins, used, besides swimming, for covering by sand © Raimundo Fernandez

The gills, covered by skin, are ample, placed at the base of the large pectoral fins, pedunculate and robust. They serve for swimming, but also for getting into the sand and for moving on the bottoms where the pelvic fins enter into play, transformed into solid limbs, able to raise up the fish and have it walking on the bottom.

Starting from the head, we note 3 old independent spines that have stretched out of proportion for attracting the attention of the preys. The first, that can reach even half a metre, is the famous mobile illicium that ends with a lobate bait: two bioluminescent leaflets due to the presence of symbiont bacteria. The other two are not mobile, but equally odd because of the presence, as well as in the low part of the first, of ramified outgrowths. The second ends in a point, the third is the smallest, but in any case of remarkable size, seen that it exceeds in length the half of the first. 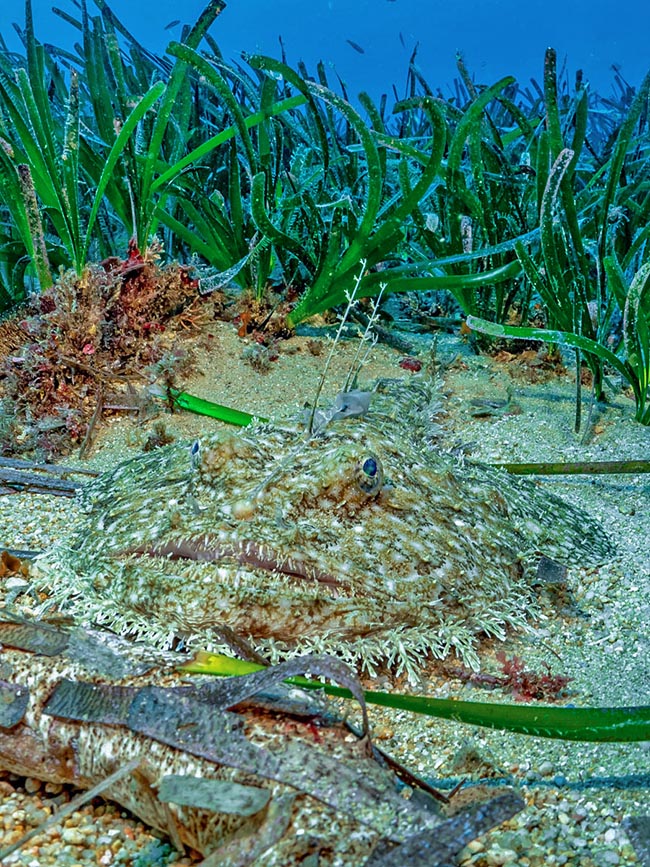 Here, waiting for prey, he lies down close to a prairie of posidonias, but frequents also rocky habitats. Too much fished, is unluckily an endangered species because the females reach the sexual maturity only around th 14 years © Raimundo Fernandez

The skin, scaleless, is smooth and rather slimy. The abdomen that rests on the bottom is white, whilst the back, of colour changing depending on the environment, is violaceous brown or olive brown with a marbled pattern having irregular spots, darker on the pectoral ones, they too whitish on the lower pagina

Lophius piscatorius has an incredible voraciousness: not only it can swallow fishes of its size, thanks to the elastic skin and to an unbelievably expandable, but it has been observed devouring like if nothing was happening, in shallow waters, seagulls and other marine birds.

It is a solitary fish that reproduces between January and June depending on the locations. A female can release even one million eggs of violet colour, inserted in a floating gelatinous, several centimetres wide, ribbon and up to 10 m long, that naturally then breaks with the wave motion.

The larvae grow pelagic, and only after the metamorphosis, the juveniles exceeding the 5-8 cm move towards the bottoms to start their benthic life.

Needless to say that the Frog fish is a fish hunted by gourmets, caught with trawl nets and longlines on the bottom. Its flesh, white and firm even after catching, reminds the taste of the lobster.

Even 33.000 tons per year are caught of it, but is consumed only the terminal part of the body, with a round section, sold as ‘monkfish’ to which at times are added the ‘chunks of monkfish’.

Despite the huge number of eggs and a discreet resilience, with the possible doubling of the populations in 1,4-4,4 years, the species is presently endangered because the females reach the sexual maturity only around the 14 years of age, when they exceed 60 cm, and frequenting the same habitats as the larger specimens that can reach the 24 years, they are unluckily fished together them, too young for reproduction.

The vulnerability index of the species consequently marks (2021) already 72 on a scale of 100.