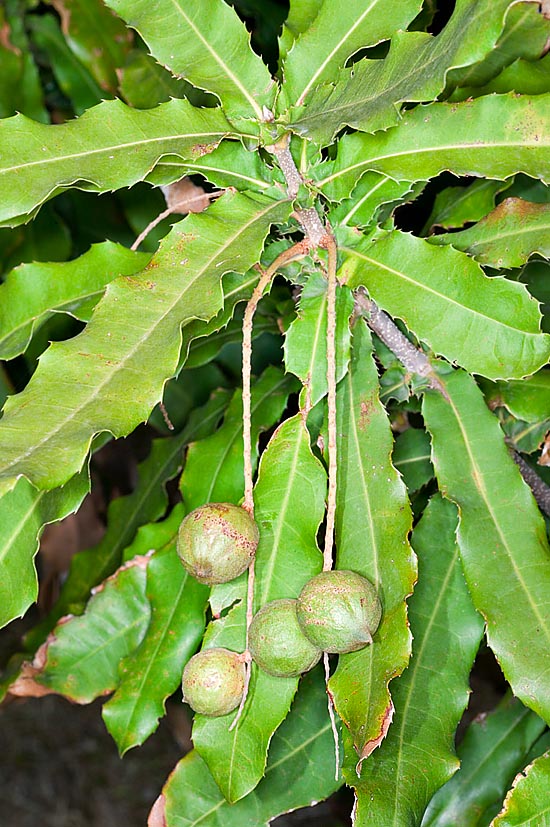 The species is native to Australia (north-eastern New South Wales and south-eastern Queensland) where it grows along the coasts in the subtropical pluvial forests on hilly slopes up to about 450 m of altitude.

The genus is honoured to the Australian (Scottish-born) physician, chemist and politician John Macadam (1827-1865); the name of the species is the combination of the Greek terms “tettares” = four and “phyllon” = leaf, with reference to the leaves often arranged in verticils of four.

The Macadamia tetraphylla L.A.S. Johnson (1954) is a shrub or a much ramified evergreen tree, 3-20 m tall, with cylindrical trunk and smooth or slightly fissured brown-greyish bark.

The leaves, sessile (having no petiole) or sub-sessile, usually arranged in verticils of four, rarely 3 or 5, are simple, coriaceous, oblong to oblanceolate, 7-25 cm long and 2-4,5 cm broad, with more or less pointed apex and thorny-toothed margins, of glossy dark green colour whilst the colour of the young leaves varies from bronzy to purpureal.

Globose fruit of 2-3,5 cm of diameter with fleshy and fibrous mesocarp of green-grey colour tending to brown, which often opens when ripe, and woody endocarp particularly hard, wrinkly, of glossy brown colour, usually containing only one globose seed of 1,5-2 cm of diameter, darker than that of the Macadamia integrifolia, edible.

It reproduces by seed, which has a germination capability lasting about six months, previously kept in water for 24 hours, in sandy loam rich of organic substance kept humid at the temperature of 22-25 °C. 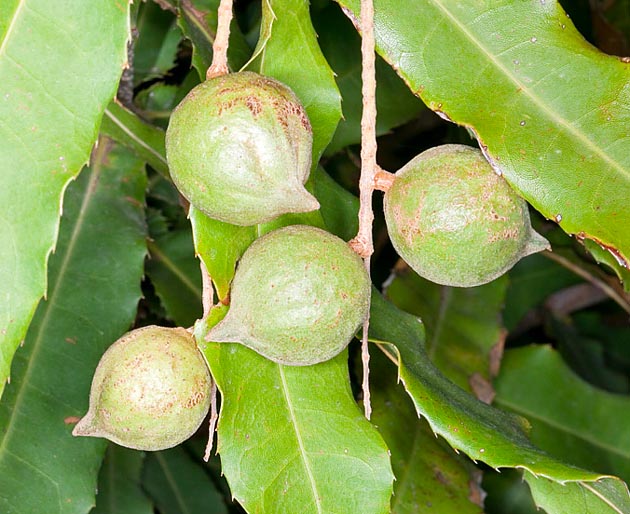 It germinates in 1-4 months and takes 7-12 years for starting the production; in order to conserve a certain variety and to shorten the times of beginning of the production recourse is done to the grafting on plants of about one year of age, with the first blooming after 2-3 years, and to the air layering.

It easily hybridizes with the Macadamia integrifolia.

The species is commercially exploited less than the Macadamia integrifolia, even if it adapts to cooler climates, having the seeds inferior contents of oil and organoleptic characteristics, the most common use is as its rootstock due to the greater resistance to the diseases.

The exigencies of cultivation and the process to which are submitted the fruits are practically the same a those of the Macadamia integrifolia, to which please refer.

Due to the top and the ornamental inflorescences, and in particular due to the very decorative new vegetation due to its colour, it is at times utilized in parks and gardens in the tropical and subtropical countries. The species is now rare in the wild, due to the exploitation of the territory, and is considered at risk of extinction in the forthcoming future.

Macadamia tetraphylla was last modified: May 1st, 2018 by Giuseppe Mazza