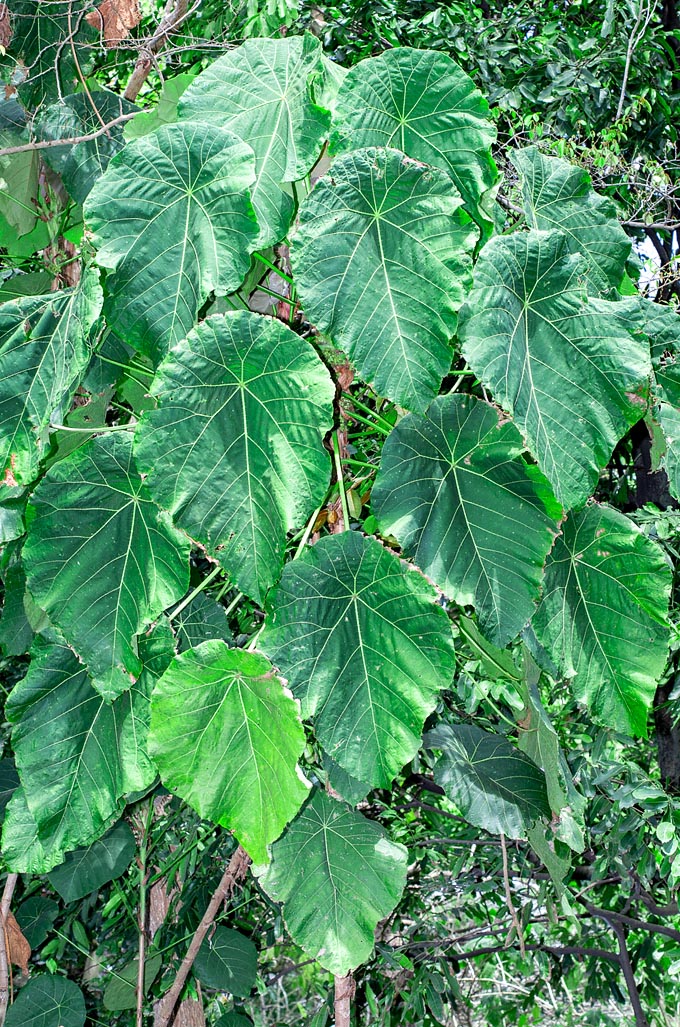 Native to Philippines, the Macaranga grandifolia, is a shrub or small dioecious tree, 4-10 m tall, with big leaves, even 80 cm long and 50 cm broad. Initially reddish, then dark green, they are carried by a robust 30-60 cm petiole © G. Mazza

The species is native to the Philippines (Luzon and Mindanao) and northern Sulawesi where it grows in the humid forests at low altitudes.

The name “macaranga” is the one in use in Madagascar to indicate a species belonging to the genus.

The specific name is the combination of the Latin adjective “grandis, e” = great, extraordinary, and of the substantive “folium, ii” = leaf, with obvious reference.

Axillary inflorescences, the males in panicles, 15-20 cm long, with numerous tiny flowers of deep pink to coral red colour, with 2-5 stamens, subtended by lanceolate bracts of the same colour.

Female inflorescences, in dense racemes with numerous flowers with bilocular ovary and 3 styles united at the base.

The fruit is a woody bilocular capsule, about 0,6 cm long and 1 cm broad, with tentacular protuberances at the apex covered by granular glands, about 1 cm long, containing two globose seeds with red aril.

It reproduces by seed, previously kept in water for two days, in organic draining loam maintained humid at the temperature of 24-28 °C, with variable germination times from 2-3 weeks, and by cutting and air layering. 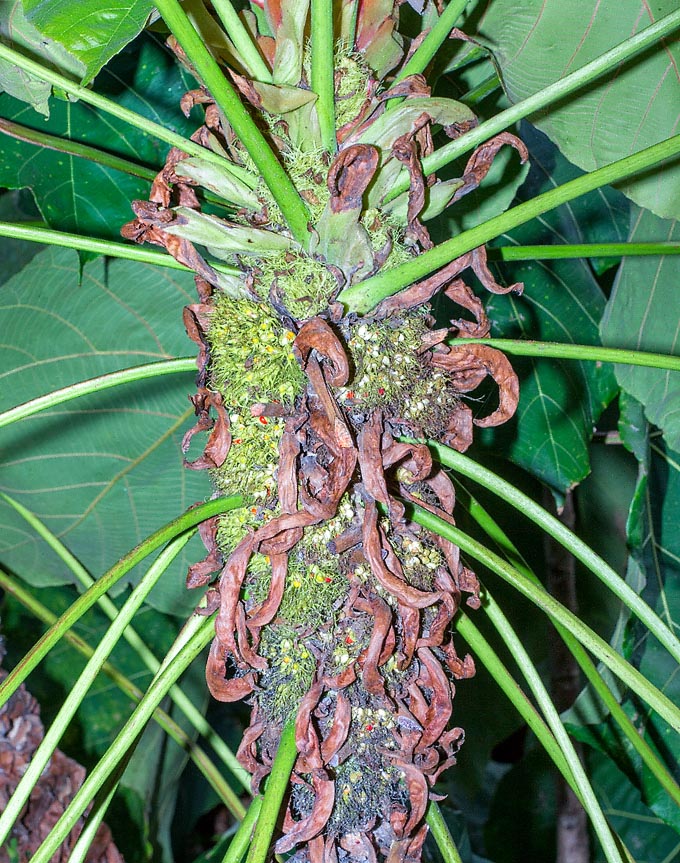 Seen from below we note the dried stipules at the base of the petioles and the red seeds peeping from the open fruits on the stem. Species at risk in nature but easy to cultivate in the tropics where it may become a pest. The leaves are locally used to wrap food. From the red resin of the trunk, with medicinal virtues, they get a glue for musical instruments © Giuseppe Mazza

Fast growing pioneer plant that tends to colonize disturbed areas, in some cases behaving as a pest.

Very appreciated as ornamental plant thanks to the big leaves and the colourful inflorescences, is a species born for the luxuriant gardens of the hot regions with humid tropical climate.

It can be cultivated also in the subtropical areas, in milder climates, where the temperatures under the 10 °C are an exceptional phenomenon and of short duration.

It requires full sun and fertile soils, slightly acidic to neutral, maintained almost constantly humid, and a position sheltered from the wind.

The leaves are locally employed to wrap the food.

The red resin gotten from the trunk is utilized as glue for musical instruments and in the popular medicine as astringent to make gargles in the mouth ulcerations.

Due to the expansion of the agricultural areas and the wild deforestation, the natural population of the Macaranga grandifolia has been greatly reduced, so much to put in serious danger its survival in the wild.

For such reason the species has been inserted in the red list of the IUCN (International Union for the Conservation of Nature) as “vulnerable” (species at risk of extinction in nature).