The Electric catfish  Malapterurus electricus (Gmelin, 1789), belongs to the class of the  Actinopterygii, the ray-finned fishes, to the order of the Siluriformes, grouping the catfishes, and to the family of the Malapteruridae, dedicated to the the electric eels, counting nowadays, in 2020, two genera, Malapterurus  and  Paradoxoglanis, and 21 species.

The specific name electricus reminds us that it is a fish able to emit, like the Electric eel (Electrophorus electricus), up to 400 volts discharges. 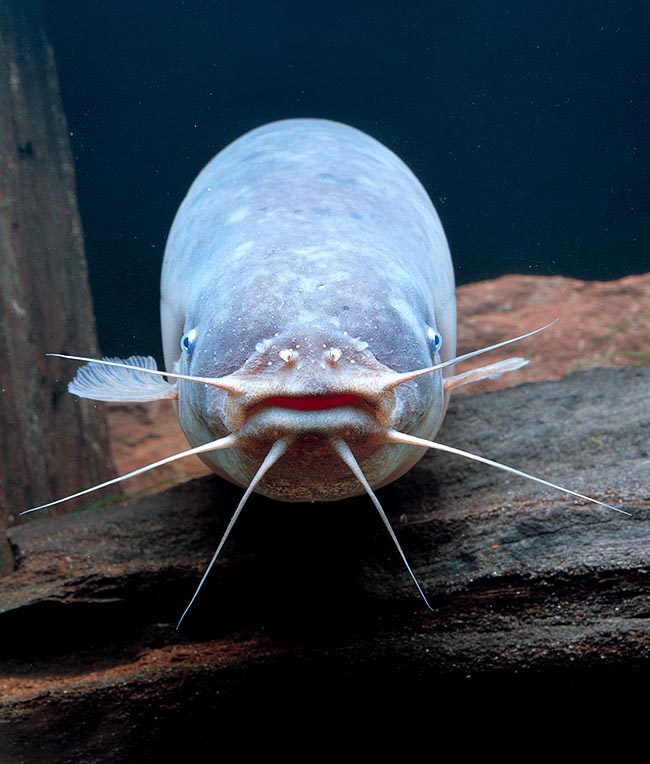 Electric catfish (Malapterurus electricus) is a nocturnal animal living in the slow-flowing rivers and lakes of tropical Africa. For defense and to stun preys, it can emits, depending on size, discharges of 350-450 volts © Giuseppe Mazza

Malapterurus electricus is a freshwater fish of tropical Africa, present from the Democratic Republic of Congo, Uganda, Kenya, Ethiopia and Sudan up to the mouth of the Nile, where it was fished by the ancient Egyptians for food and for therapeutic purpose, as they used the electric discharges for treating arthritis. Then, westwards, we find it in Cameroon, Central African Republic, Tchad, Nigeria, Niger, Togo, Ghana, Ivory Coast, Burkina Faso, Mali, Guinea and Senegal.

It is a nocturnal animal living in the slow-flowing rivers and lakes, excluding the large Lake Victoria. It loves turbid waters with poor visibility, where, in the dark, the preys do not see it approaching, and then digests it while dozing, during the hours of the day, hidden by rocks and roots.

Scaleless, a Malapterurus electricus when swimming has in its whole the look of a big sausage that, in the males, may reach 120 cm in length with a weight of 20 kg.

Unusually, the fins have no spines, defensive weapons here absolutely of no use, seen that the predators are already inhibited by the powerful discharges.

The eyes, actually useless, are very small, the mouth is wide with thick lips. It has fine teeth arranged in wide bands on both jaws and 6 barbells, that, as in all catfishes, have sensory functions, together with the olfaction that displays showy and well separated nostrils. The gills openings are narrow, almost hidden by the fins.

The livery is brown-greyish, paler ventrally, with irregular dark spots getting wider towards the caudal peduncle. This one shows two passing bands of analogous color with a pale band at the center, drawing much more evident in the juveniles that have a pinkish body.

Electricity is generated by thousands of cells, disc-shaped, called electrocutes, tightly packed together and daisy chained to generate shock pulses with a tension that may reach the 350-450 volts depending on the size of the fish. They are present all over the body, but the fins and the head, placed between the skin and an insulating layer protecting the internal organs. 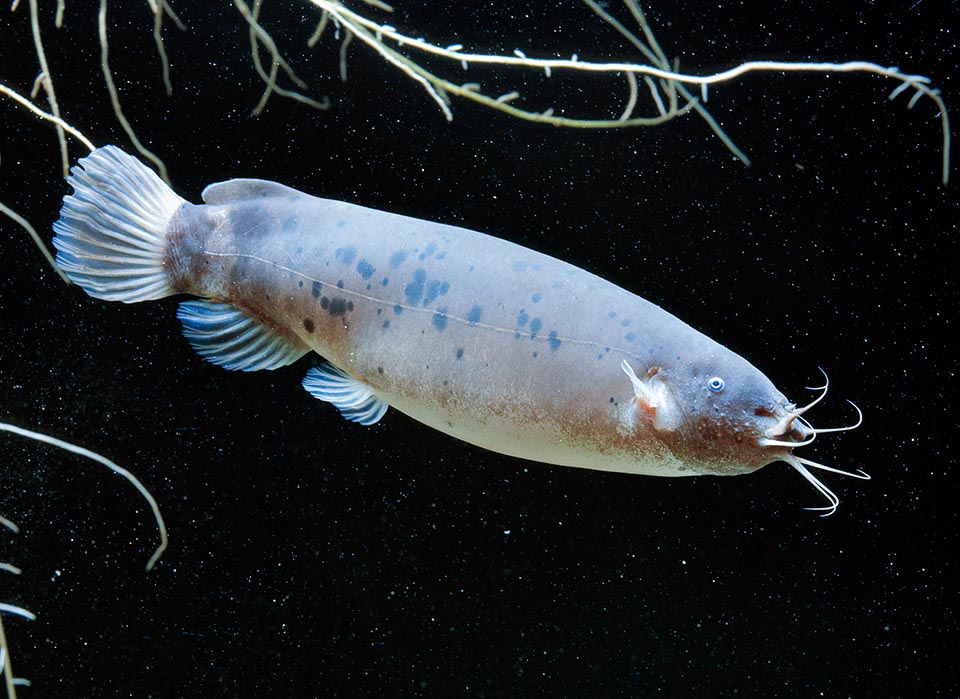 Without spines and scales, resembling a big sausage, can be 120 cm long and weigh 20 kg. Fished for food and menaced by pollution, is now a vulnerable species © Giuseppe Mazza

The Malapterurus electricus nourish of fishes stunned by their discharges. The adults live in couples with particularly territorial males, ready to drive away with any means the big intruders that might send away their preys. For reproducing, they look for cavities suitable for spawning, digging often even 3 m long tunnels, but little is known about their mating and their parental cares.

The Electric catfish is presently considered as an endangered species, threatened by the pollution linked with the human activities and by several parasites, it is fished unscrupulously for food use or for reaching as a curiosity an aquarium, where, if the size is adequate, it can reach the 10 years of age. The resilience of the species is very low, as are needed 4,5-14 years for doubling the populations decimated by the events, and the vulnerability index is already of 74 on a scale of 100.