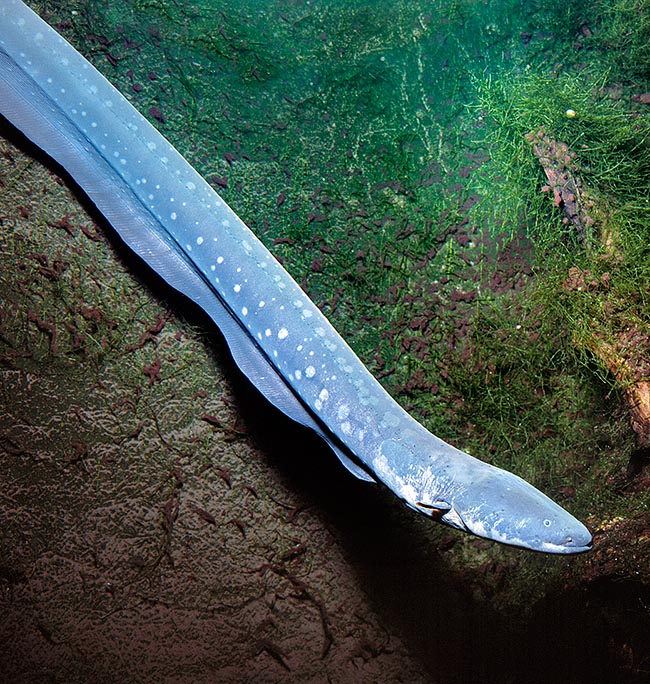 Electrophorus electricus (Linnaeus, 1766), commonly known as Electric eel, belongs to the class of the Actinopterygii, the ray-finned fishes, to the order of the Gymnotiformes and to the family of the  Gymnotidae, presently counting, in 2020, 2 genera,  Electrophorus and Gymnotus, with 43 species.

The genus Electrophorus has an interesting etymology originating from the Greek “ἤλεκτρον” (elektron) meaning alloy of gold and silver, or, even better, amber, the known fossil resin much in demand at the time, which has the same colour, and from the verb to carry “φέρω” (phérō). That is, of a fish carrying the electricity.

In fact, it had been noted in the old times that when rubbing the amber they obtained an electric charge and after this characteristic, it was adopted the term “electricity” (alias, amber) to indicate this new energy.

The specific name electricus confirms in Latin the same concept, as often occurs in the scientific binomina when it is wanted to emphasize the exceptional characteristics of a species. As a matter of fact, it is not normal to find a fish able to release discharges of more than 400 volts.

Like the Electric catfish (Malapterurus electricus) it is a nocturnal freshwater species, typical to the tropical Varzea floodplains, periodically inundated by the flooded rivers, and generally to the swamps and slow-flowing water courses. 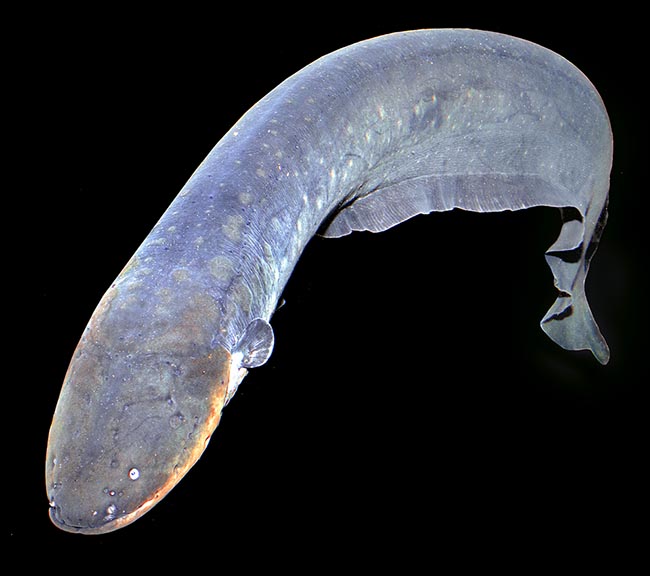 In addition to the number of lateral pores, then of the pectoral fins rays and the volts of discharges, it distinguishes prima facie from the two analogous species, without resorting to DNA, for the characteristic flat U-shaped muzzle © Giuseppe Mazza

It can bury into the mud in order not to be taken away by the sudden floods but emerges periodically to swallow air.

The mouth, rich in blood vessels, acts in fact as lungs and the gills, atrophied, are not used for absorbing oxygen, but for eliminating the carbon dioxide.

In the habitat where it lives, it is the dominant fish, forming, alone, 70% of the ichthyic biomass.

Even if commonly known as Electric eel, the Electrophorus electricus has nothing to share with the eels; in fact, they are yore animals, quite different, born between Miocene and Pliocene.

Scales are absent, as well as the dorsal fin and the pelvic ones.

The mouth is very large for storing the air it uses when underwater, with one line of conical teeth per jaw, that can serve to hold for a short time, the time of a discharge, the most elusive prey.

It morphologically distinguishes from the other two species for the shape of the head. Like in the Electrophorus voltai the skull is flat, but the head, seen ventrally, is longer and “U”-shaped. In Electrophorus varii, fish living in very slow and muddy waters, with no stones where to anchor in case of sudden rapids for looking for prey, the skull, conversely, is short and high. 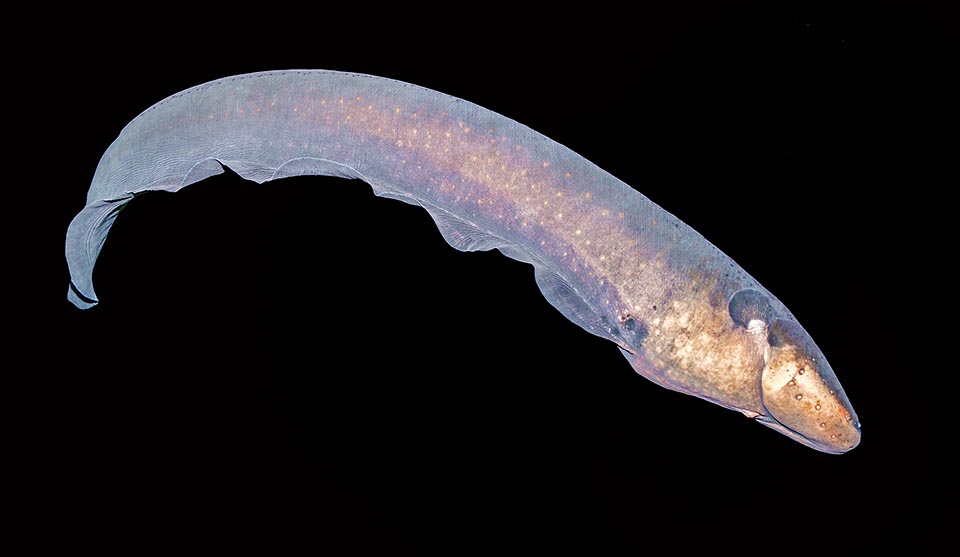 There are differences also on the number of rays of the pectoral fins and on that of the showy lateral pores: 88-101 for Electrophorus electricus, 124-86 in Electrophorus varii and 112-146 for Electrophorus voltai not to talk of the voltage that reaches 480 volts, 572 volts and 860 volts respectively.

They are fishes endowed with three electric members. The main is located on the back, whilst the ventral zone is entrusted to the analogous Hunter’s organ, and the tail, with the back part of the fish, is entrusted to the Sach’s organ, that is the negative pole of the body and emits low voltage pulses serving to localize preys and conspecifics. 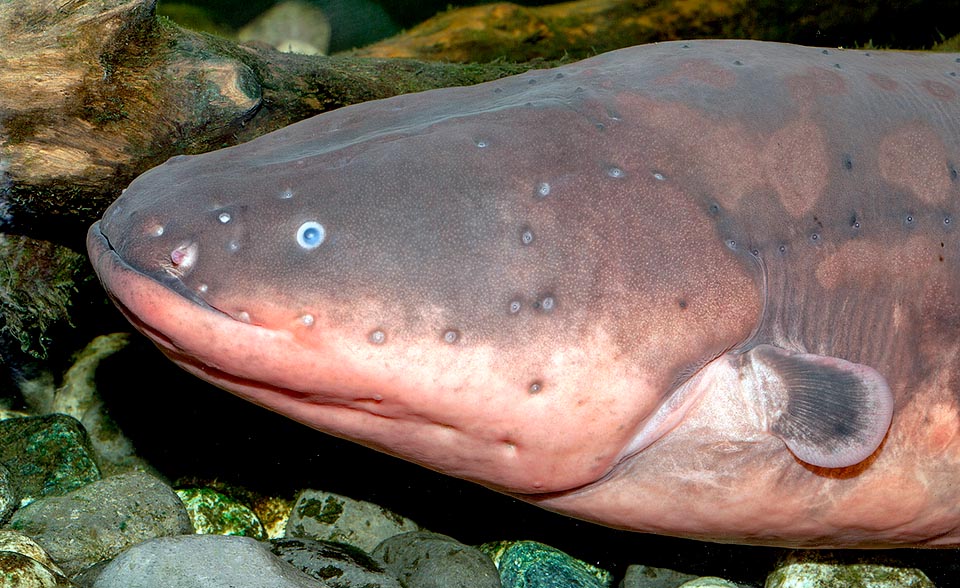 Rich of blood vessels, the mouth can breathe air, like a lung. Very big, allows to gulp whole the preys stunned by strong discharges © Giuseppe Mazza

The electricity is generated by pumping positive potassium ions on the outer side of thousands of electro cells, shaped like disks, called electrocytes. They are tightly packed together, produce 0,15 volts each and, concatenated, generate the shock pulses.

Electrophorus electricus nourishes of fishes it dulls and swallows whole, but also of fruits falling from the trees growing over its water surface and of terrestrial animals getting close and attacks jumping out with the head. The electric discharge, not dispersing in the water, in these cases reaches its maximum power. 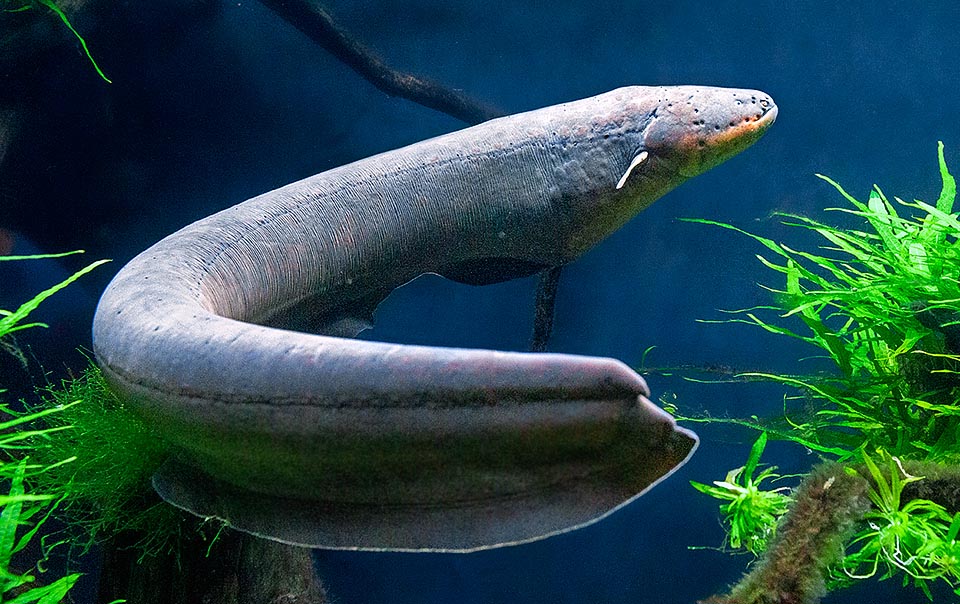 They are fishes with three electric organs. The dorsal and the ventral can emit shock 480 volts discharges, whilst the tail is the negative pole of the body and emits low tension pulses to locate the preys and conspecifics. The electricity is produced by thousands of disk-shaped cells, tightly packed, called electrocytes © Giuseppe Mazza

For their submerged preys, it can also wrap itself around the victim, neutralizing its muscles with an uninterrupted series of discharges spaced of one millisecond. Needless to say that the electricity serves also to flush out the prey and that it is also a powerful defensive weapon, and dangerous even for man.

The males, bigger than the females and three times more numerous, build nests of foam and send signals to their partners with the Sach’s organ, inviting them to hatch. Then, they survey the growing larvae until the rain season, when the floods disperse the young, about 10 cm long by that time. 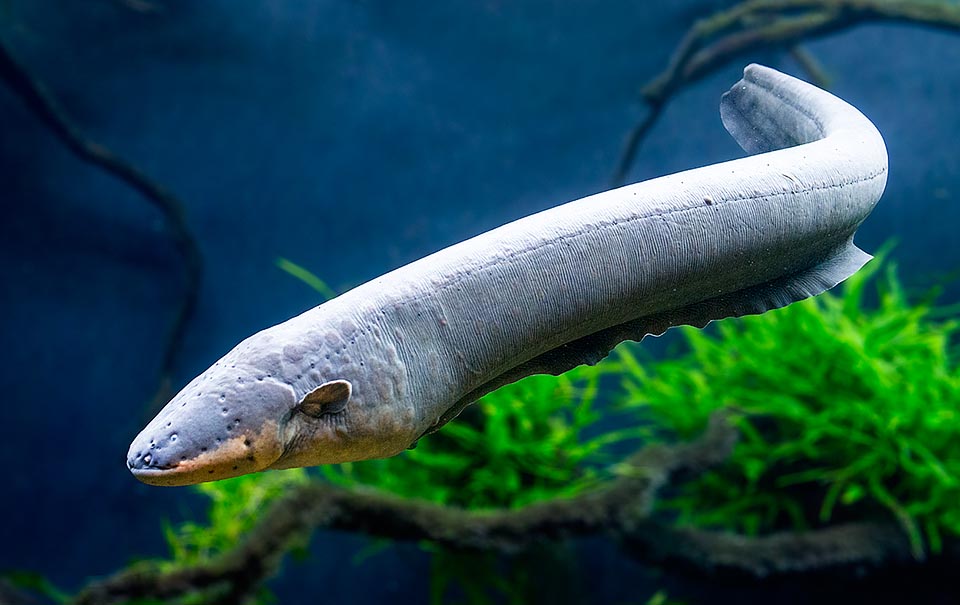 Males build foam nests. After spawning, which occurs several times, they survey the eggs and the growing larvae until the rain season, when floods disperse the about 10 cm long young. Though having crossed the millennia unscathed, from Miocene and Pliocene to the present day, the electric eel is an endangered species © Giuseppe Mazza

Even if it has gone through millennia Electrophorus electricus, is presently an endangered species. Resilience is low, with a theoretical doubling time of the populations of 1,4-4,4 years, and the vulnerability index marks 61 on a scale of 100.