The genus is dedicate to the Italian scientist, naturalist, military and traveller Luigi Ferdinando Marsigli or Marsili (1658-1730), considered as the founder of the modern oceanography; the name of the species is the Latin adjective “vestitus, a, um” = dressed, covered, with reference to the down covering various parts of the plant.

The Marsilea vestita Hook. & Grev. (1830) is an aquatic or perennial amphibious fern (Pteridophyta), rather variable, with filiform creeping rhizomes, rooting exclusively at the nodes, 1,5-5 cm distant from each other.

Deciduous leaves (fronds), on a pubescent 2-35 long petiole, floating or emerged, depending on the depth of the water, solitary (rarely) or 2-4 per node, formed by 4 flabellate leaflets with outer margin rounded, entire or crenulate, slightly unequal, 0,4-1,6 cm long and broad, pubescent or glabrous, rather thick, of pale green colour.

The plants living on lands not submerged by the water display characteristics slightly different from the aquatic ones, due to the adaptation to the different environmental conditions. 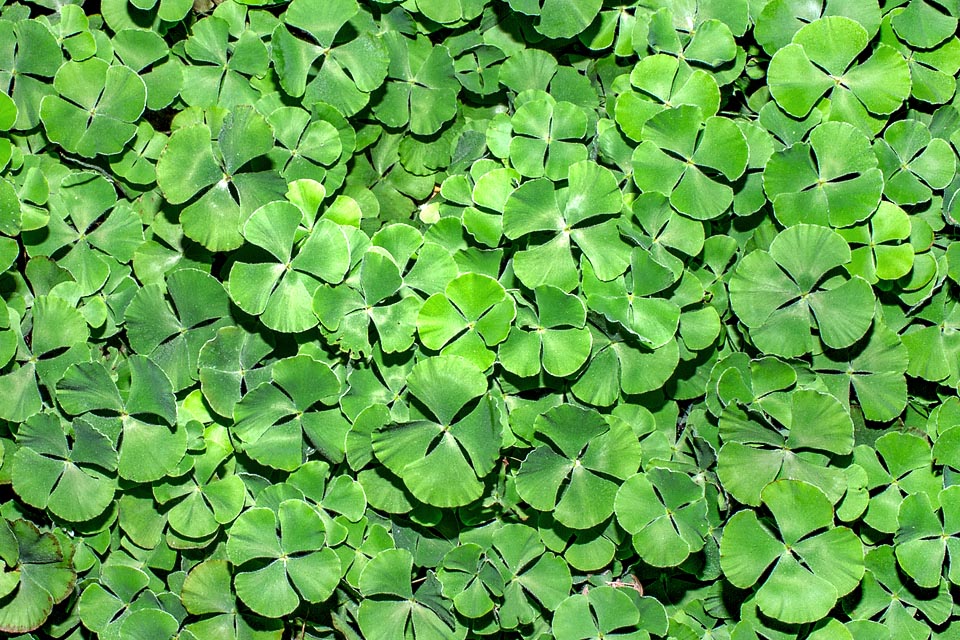 Unusual aquatic or terrestrial fern, the Marsilea vestita is native to Canada and USA. Filiform creeping rhizomes, rooting at the nodes. In water may become a pest © Giuseppe Mazza

At the base of the petioles, on an erect not ramified stem, 1-25 mm long, stand, solitary, the sporocarps, ellipsoid or globose involucres (modified leaves), compressed laterally, with a tiny acute tooth in the upper part, 4-8 mm long, 3-7 mm broad and about 2 mm thick, covered by bristly hairs, of olive green to blackish brown colour when ripe.

The sporocarps contain inside numerous sori here are grouped together two types of sporangia (heterospory): megasporangia, that contain only one megaspore (female spore), and microsporangia, that contain up to 64 microspores (male spores). Once ripe, if the environmental conditions are favourable to the reproduction, in particular if there is presence of water, the sporocarp opens in two halves, allowing the hydration of its interior that swells getting out under form of a gelatinous cord. This carries the sori in the water, where takes place the germination of the spores and the fecundation. If the environmental conditions are not favourable, the sporocarps may remain dormant for various years till when the conditions are again favourable.

At amateur level it reproduces vegetatively through division of the rhizomes.

It is a species extremely interesting due to the way, just mentioned above, with which it reproduces, and that has been object of several studies. It grows in water, where it can form dense colonies, at times behaving as a pest, as well as in humid soils, in full sun or partial shade, and can represent an element of ornament of aquatic gardens, where it is preferable not to get it rooting on the bottom, to avoid that covers the whole surface, but in a pot in way to keep it under control.