The species is native to southern Egypt and to northern Sudan where it grows sporadically in the Nubian Desert in the creek beds (wadis) and in the oases in presence of ground waters.

The name of the genus might come from the Greek pronominal adjective “μηδείς, μηδεμία, μηδέν” (medeís, medemía, medén) = nobody, with possible reference to the desert environment where it lives; the name of the species is the local one used by the Bedouin tribes Ababda and Bisharin.

The Medemia argun (Mart.) Württemb. ex H.Wendl. (1881) is a dioecious species with solitary stem, up to about 12 m tall, and of 30-40 cm of diameter, covered under the top by the persistent dry leaves and by the intertwined foliar bases, but in the oldest part, wrinkled and marked by the foliar scars. The leaves are strongly costapalmate, 1,2-1,5 m long, of green grey to bluish green color, divided per about 2/3 of their length in rigid lanceolate long pointed segments. The petiole, 0,8-1 m long, of yellow color with blackish brown shades at the base, is devoid of hastula (appendix placed at the junction of the foliar lamina with the petiole) and provided in the young plants of spaced and curved blackish spines tending to dwindle in the adult plants.

Inflorescences between the leaves (interfoliar) with ramifications of first order, the male ones, 2-2,5 m long, bearing at the apex up to 7 rachillae arranged in semicircle, densely covered by imbricate bracts spirally arranged, tomentose, laterally united to form a pocket containing 3 flowers, that protrude individually in succession, with 6 stamens. Female inflorescences, about 1 m long, bearing at the apex of the ramification only one rachilla similar to the male ones with solitary flowers, on a short hairy pedicel, wtih tri-carpellate globose gynecaeum and 3 short curved stigmas. Fruits usually developing from one only carpel, ovoid of glossy blackish purple color, 4-5 cm long and of about 3 cm of diameter containing only one ovoid seed, about 3 cm long and of 2,5 cm of diameter, with radially ruminated endosperm (endosperm crossed by folds of the perisperm). 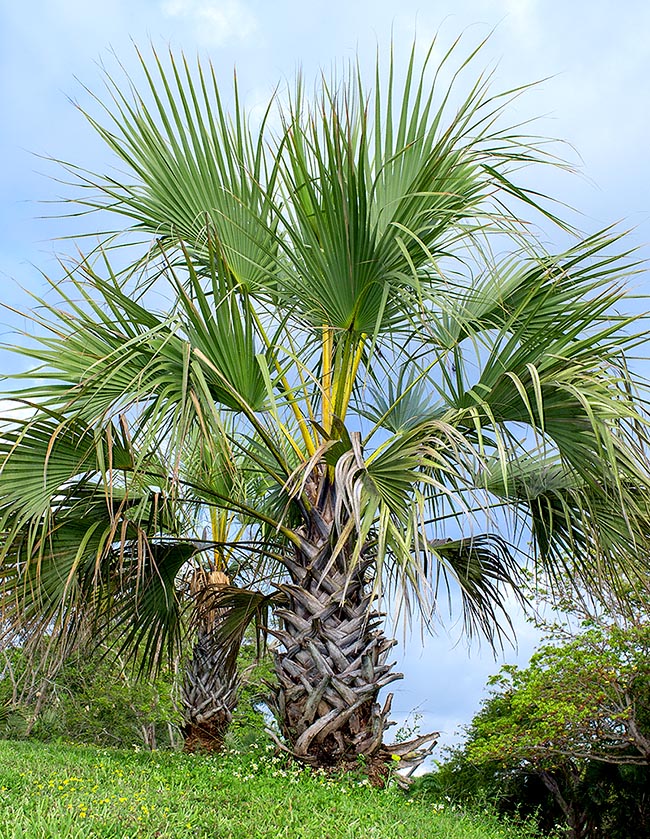 Species at high risk of extinction in nature, Medemia argun is native to southern Egypt and northern Sudan where it grows sporadically in the Nubian Desert in the creek beds and oases in presence of subterranean ground waters. It accepts, in well-drained soils, also the tropical and subtropical humid climates but not the Mediterranean one © Giuseppe Mazza

It reproduces by seed, previously kept in water for three days, planted directly in full sun in deep and draining soils. Alternatively, can be used tall containers, seen that the hypocotyl developing from the seed, and on whose extremity stands the embryo that will originate the plant, goes in depth, with sandy loam, draining, maintained slightly humid at the temperature of 26-28 °C, with germination times of 1-3 months.

The first information about its existence has been gotten through the fruits abundantly found in the tombs of the old Egypt during the excavations done by the Italian Giuseppe Passalacqua (1797-1865) and by this sent to the German botanist Carl Sigismund Kunth (1788-1850) who realized to be in presence of an unknown species and described it in 1826 as Areca passalacquae, name not considered valid, in respect to the present, because insufficiently described.

About twenty years later the German naturalist and explorer Friedrich Paul Wilhelm von Württemberg (1797-1860) found in the Nubian desert a palm, called by the Bedouin tribes argun, with fruits similar to those found in the tombs, whose description, as Hyphaene argun, was reported in 1845 by the German botanist Carl Friedrich Philipp von Martius (1794-1868) in his “Historia Naturalis Palmarum”, that, later on, due to the important differences, among which the absence of hastula and the ruminated seeds, was transferred in the new genus Medemia.

In the years following the first finding the reports of its presence in nature were so scarce to be considered, during the second half of the XX century, probably extinct, it has been thanks to the initiative of two nurserymen lovers of palms, Martin Gibbons, English, and Tobias W. Spanner, German, that the species has been “rediscovered” in 1995. During an expedition in Sudan organized by them with that purpose, following the indications of previous findings, have been found close to the boundary with Egypt several adult plants and have been collected many seeds, immediately distributed to scientific institutions, botanical gardens and lovers, that have generated new plants already able to reproduce after a few years.

Presently (2018) the number of individuals in Egypt we know is of a few units, whilst in Sudan several hundreds have been counted, but in sites isolated from each other and subject to fires, vandalisms and indiscriminate collection of leaves, utilized by the Bedouin tribes for fabricating mats, cordages, harnesses for the camels and other everyday objects, that together with the environmental conditions increasingly prohibitive, have contributed to its rarity.

Despite coming from extremely arid areas and with high thermal daily excursions, it has proved adaptable also to the tropical and humid subtropical climates, like those of southern Florida and of Thailand, provided on perfectly draining soils, to avoid dangerous water stagnations, whilst it badly bears long periods with high humidity and relatively low temperatures, such as those met in the Mediterranean type climates, unless it is not sheltered from the winter rains.

The species has been inserted in the red list of the IUCN (International Union for the Conservation of Natural Resources) as “Critically Endangered” (at extremely high risk of extinction in nature in the immediate future).