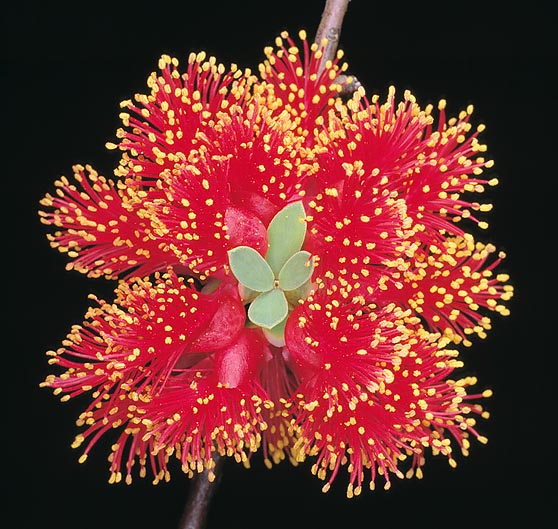 This subspecies is native to south-western Australia (Western Australia), where it grows on clayey as well as on sandy, stony soils and on granite outcrops, in zones characterized by a Mediterranean type climate, with humid and mild winters and warm and dry summers.

The name is the combination of the Greek terms “melas” = black and “léukos” = white with reference to the colour of the bark, initially white then becoming blackish while ageing; the name of the species is the Latin term “fulgens” = shining; the subspecies is honoured to the Australian botanist with Scottish origins, Henry Steedman (1866-1953).

The Melaleuca fulgens subsp. steedmanii (C.A.Gardner) K.J.Cowley (1990) is a compact evergreen shrub, 1-3 m tall, with ascending branches and opposite leaves, oblong with sharp apex, 1-4 cm long, of bluish green colour, aromatic due to the presence of oleiferous glands.

The inflorescences are cylindrical spikes, 4-6 cm long, carrying hermaphrodite flowers with green calyx, 5 small roundish petals of reddish colour and stamina, the most evident part of the flower, about 3,5 cm long and united at the base in 5 bands, of scarlet red colour with golden yellow anthers; there are also forms with pink and white flower. The fruits are globose, woody and greyish capsules, containing numerous tiny seeds.

It easily reproduces by seed, placed in the surface on sandy soil kept humid, which germinates in 1-3 weeks, and by apical cutting in summer. It is a much ornamental shrub and of easy cultivation thanks to its adaptability to different types of soil and of climatic conditions, as it bears long drought periods in summer, once well rooted, as well as constant humidity.

It is cultivable in full sun or slight shade, in addition to the Mediterranean type climates, also in the tropical, subtropical and warm temperate ones, where it may resist to temperatures as low as about -4 °C. It can be utilized as isolated specimen, in group or for fences; it blooms between late winter and early summer. Light prunings after the flowering help in keeping compact its appearance.