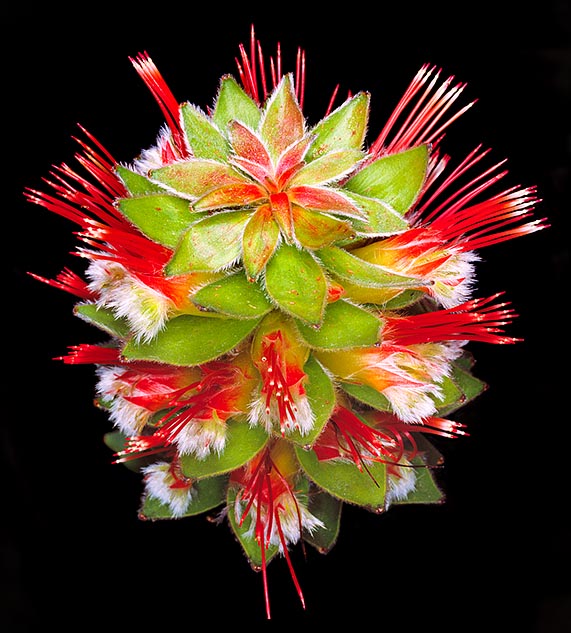 Mimetes hirtus is a difficult to cultivate plant © Giuseppe Mazza

The species is native to South Africa where it grows in the south-western extremity of the Province of Western Cape, in full sun, on soils formed by vegetal decayed materials permanently humid, up to about 400 m of altitude.

The name of the genus is the Greek epithet “mimetes” = imitator, of unclear reference; the name of the species is the Latin adjective “hirtus, a, um” = shaggy, hairy, with reference to the hairs on the stem and at the margins of the leaves.

The Mimetes hirtus Salisb. ex Knight (1809) is an erect, much ramified, evergreen shrub, up to about 2,5 m tall, with simple, sessile, close leaves, spirally arranged, coriaceous, ovate to lanceolate with pointed apex and ciliated margins, 2,5-4,5 cm long and 0,5-2 cm broad.

Inflorescences at the axil of the terminal leaves of the floriferous branches formed by 9-14 white flowers with tubular perianth formed by 4 hairy tepals and red style, 4-5,5 cm long, surrounded by yellow involucral bracts with red apex, 1,5-4 cm long; the floriferous branch is surmounted by a tuft of flattened leaves, morbid, of reddish brown colour.

The flowers are rich of nectar that attracts the birds who act as pollinators. The fruits are achenes covered by a fleshy membrane (elaiosome) particularly appreciated by the ants which favour their dispersion. It does not resist to the fire, having no lignotuber, the upper part of the root, enlarged and lignified, which allows the plant to regenerate after the fire, its survival is therefore linked to the seeds whose germination is favoured by such circumstance.

It reproduces by seed in organic loam and siliceous sand in equal parts, at the temperature of 18-20 °C and by cutting with bottom heat in a substratum having the same composition. Species having rather particular exigencies and different from most of the Proteaceae, even if coming, in fact, from zones characterized by a Mediterranean type climate, with mild and rainy winters and warm and dry summers, it grows on acidic soils of mainly organic origin and constantly humid, even during the summer, but perfectly draining and aerated, conditions which are not easy to reproduce in cultivation, considered also its susceptibility to the rooting rottenness by Phytophthora spp. in situations of water stagnation.

Due to the progressive reduction of its natural habitat, the species has been inserted into the list of the vulnerable plants (VU) of IUCN (International Union for the Conservation of Nature).

Mimetes hirtus was last modified: May 2nd, 2018 by Giuseppe Mazza