The species is native to Comoro Islands and Madagascar, where is present along all eastern coast and, for a short distance, in the north-western one. It grows on the dunes and in the coastal forests on sandy soils, from the sea level up to about 150 m of altitude, in zones characterized by a high rainfall and a little marked dry season.

The Mimusops coriacea (A.DC.) Miq. (1863) is a leafy evergreen tree, 6-15 m tall, with tortuous trunk with grey-brown bark, tending to fissure vertically with the age, and milky sap. 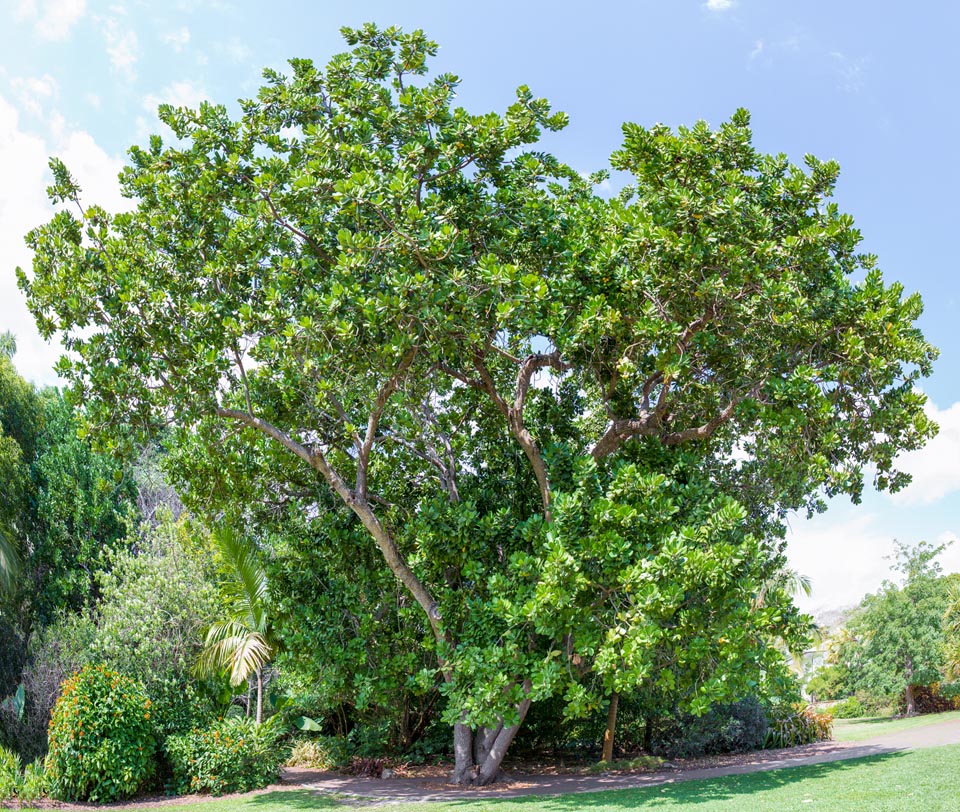 The leaves, usually grouped at the apex of the branches on a 1-1,5 cm long petiole, are alternate, simply, elliptic to obovate with emarginate apex and entire margin, 7-16 cm long and 5-8 cm broad, coriaceous, of dark green colur and glossy above, paler below.

Flowers, on a 4-6 cm long pedicel, axillar, solitary or fasciculate, of about 1,5 cm of diameter, whitish, with calyx formed by 8 sepals arranged in 2 verticils of 4, triangular, the outer ones not overlapped, the inner ones imbricate, about 0,5 cm long, covered externally by a brown-reddish tomentum. Corolla with short tube and 8 lobes deeply incised in thin segments, 8 stamens alternate to 8 staminodes, and pubescent ovary with 8 loculi. The fruits are globose berries, of 3-5 cm of diameter, initially of green colour, then yellow or orange when ripe, containing usually 1-3 ellipsoid seeds compressed laterally of dark brown colour and glossy.

Due to its ornamental characteristics, the resistance to the wind and to the marine climate, it has been introduced in many tropical and subtropical countries as windbreak and for shade in the areas close to the sea, where in some cases it has escaped the cultivation naturalizing and behaving at times as a pest, in particular it has entered to be part of the landscape of the Brazilian coasts. 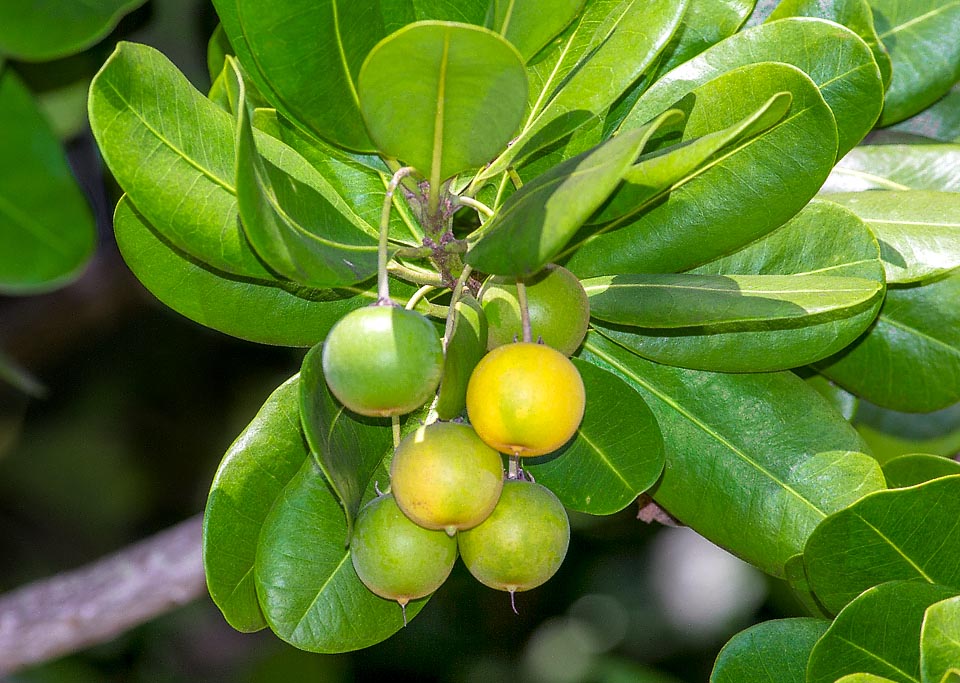 The fruits,edible but not much appreciated, with powdery and slightly sticky pulp, are globose berries, of 3-5 cm of diameter, initially green and then yellow or orange when ripe. The seeds, particularly hard, are utilized by local craftsmanship, the wood is of good quality and various parts of the plant display medicinal virtues © Giuseppe Mazza

It requires full sun and adapts to several types of soil, provided draining, and though preferring humid climates with a limited dry season, when adult it can stand drought periods.

The fruits are edible, but not much appreciated, with powdery and slightly sticky pulp, rather sweet when perfectly ripe. The seeds, particularly hard, are utilized by the local craftsmanship, necklaces and other articles of trinket, and the oil extracted is used in painting.

The wood, of good quality, has a limited use in the civil and naval constructions and in cabinetmaking. Various parts of the plant are employed in the popular medicine for various pathologies