Rarely cultivated plant, but easy in mild climates. Opens in the evening and close in the morning. Delicate fragrance and different colours even on the same plant. 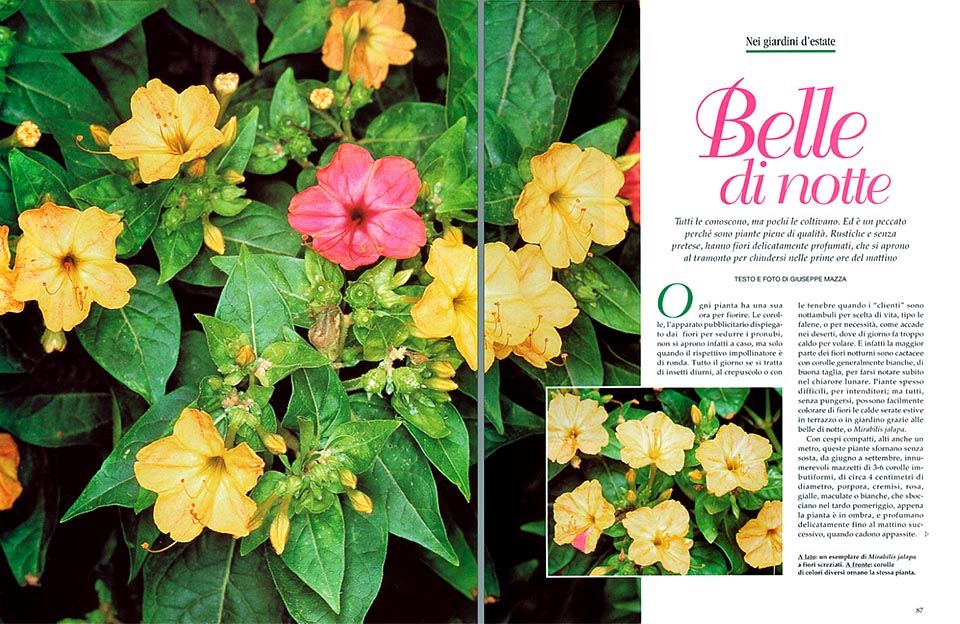 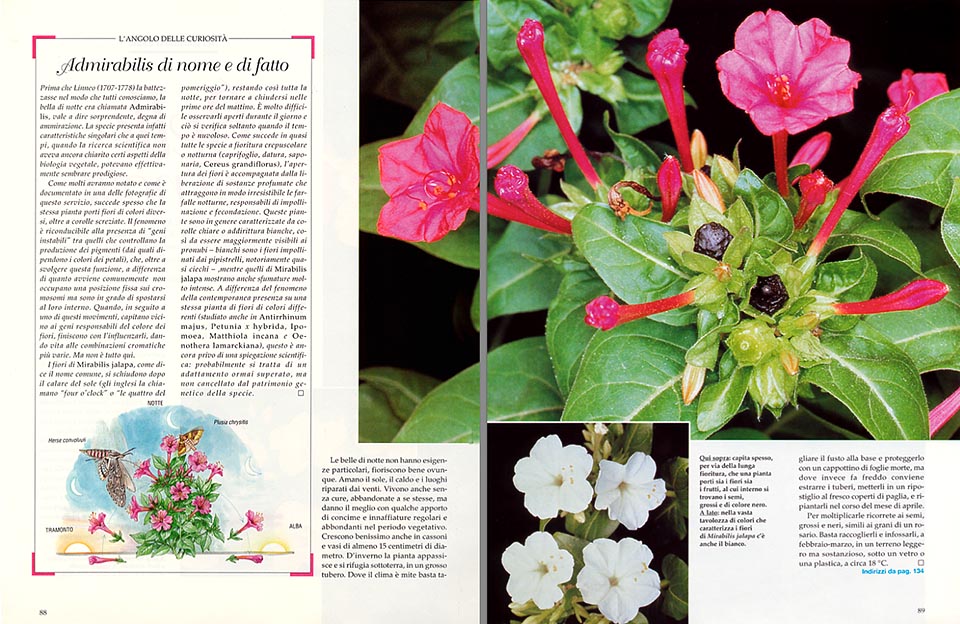 Each plant has its own time for blossoming.

The corollas, advertising apparatus of the flowers for seducing the pollinators, in fact, do not open by chance, but only when the relevant pollinator is going around.

All the day, if it’s matter of diurnal insects, and by the twilight of with the dark, when the “customers” are night-wanderers, by choice of life, like the moths, or by necessity, as it happens in the deserts, where it is too hot for flying during the day.

And, in fact, most of the nocturnal flowers are cacti, plants with “accordion stems”, more or less swollen of water, in order to resist to the drought and corollas usually white, of good size, easily visible under the moonlight.

This is the case of the Harrisia jusbertii, of many Trichocereus, the Cereus spegazzinii, with white and pink petals, and of the well known Cereus peruvianus, often sold in “non returnable pots”, intended to languish inside the houses, but which can get over, in Mediterranean climates and in open air, the ten metres of height.

He who does not want to take risks, and allergic to the thorns, looks for colours for the warm summer nights in the terrace or in the garden, can, on the other hand, opt for the Four o’clock flowers (Mirabilis jalapa), and the Evening star (Oenothera biennis).

The first ones, with compact tufts, tall even one metre, bring out, incessantly, from June to September, small bunches of purple, crimson, pink, yellow or variegated corollas, which open in the late afternoon, as soon as the plants goes in the shade, and smell, delicately, till the morning, when they fall down, withered.

The second one reaches the metre and a half, and is generous, for all the summer, of 5-6 cm diameter flowers, which blossom, a little later, as soon as the darkness comes, and last, usually, till mid-morning.

The Four o’clock flowers love the sun, the heat, and the locations sheltered from the wind. They live also without attentions, abandoned to themselves, but give their best with regular and abundant watering during the vegetative time.

They grow up very well also in pot. In winter, the plant withers and disappears under the soil in a bug tuber. In the locations where the climate is mild, it suffices to cut the stem, and, if it is the case, protect the soil with a layer of leaves; but, where it is cold, it is better to extract the tubers, keep them in the cellar, in the straw, and plant them, again, in April.

The multiplication by seed is quite simple. The flowers are followed by big black grains. It is sufficient to pick them up, and place them, in February-March, in a light, but rich, soil, in a sheltered place at about 18 °C. The plant will not keep us waiting too long. But, for getting large tufts with big tubers… some patience is needed.