These are the new trends. Variegated and iridescent colours, velvet effects, miniature rosebushes for your balcony, disease resistant varieties, very long flowerings and unusual fragrances. These are the trends of hybridisators. 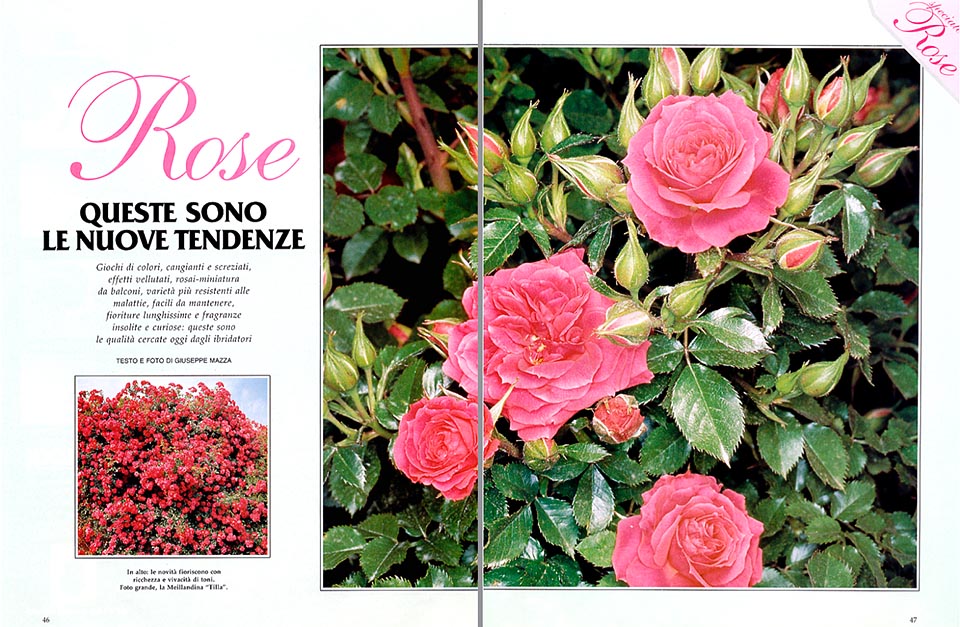 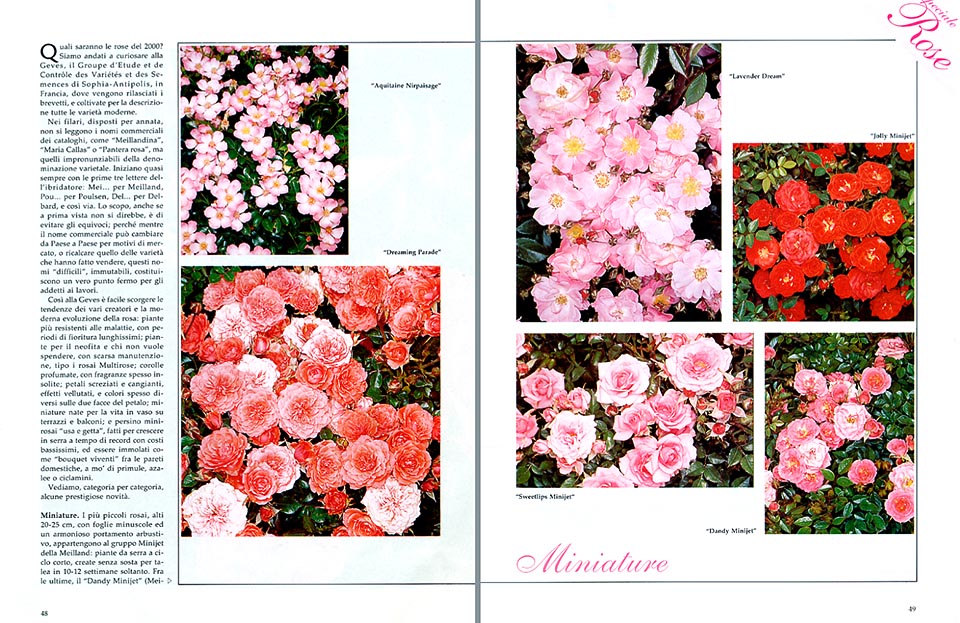 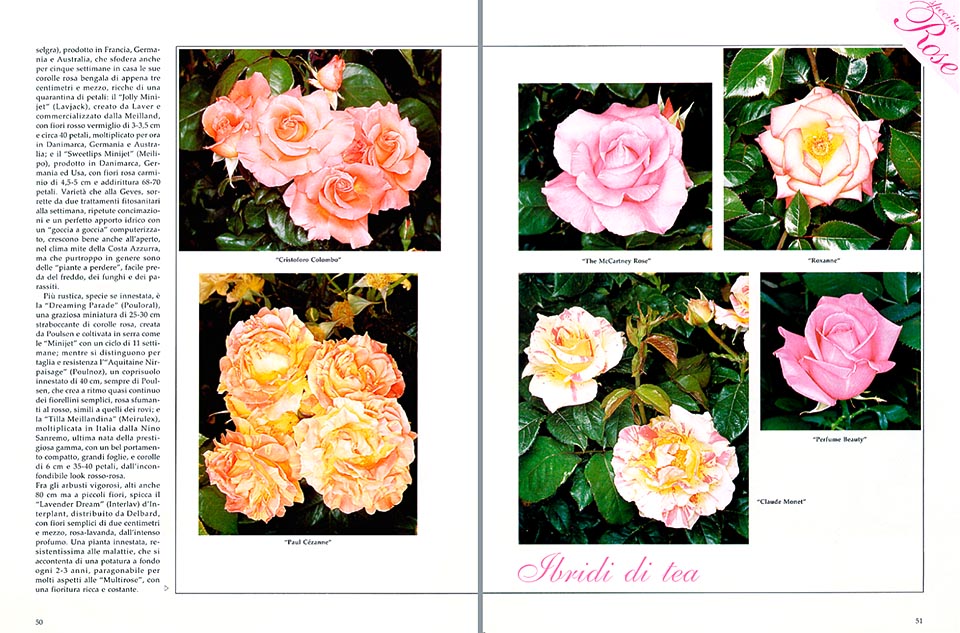 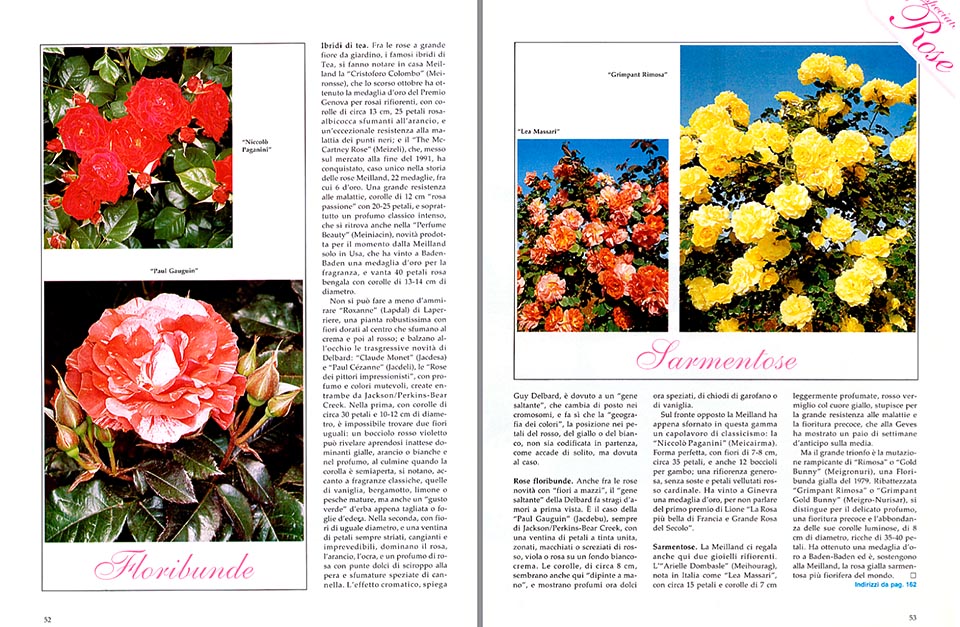 What will be the roses like in the year 2000? I have gone looking around at the GEVES, the Groupe d’Etude et de Contrôle des Variétés et des Semences, of Sophia-Antipolis, in France, where the patents are released, and are cultivated, for their description, all modern varieties.

In the rows, placed by year, you never read the commercial names of the catalogues, such as ‘Meillandina’, ‘Maria Callas’, or ‘Pantera Rosa’, but those, unpronounceable, of the “varietal denomination”.

They begin, almost always, with the first three letters of the hybridizer: Mei…. for Meilland, Pou…. for Poulsen, Del…. for Delbard, and so on. The purpose, even if not evident at first sight, is to avoid misunderstandings; because, while the commercial name can change from a Country to another, for marketing reasons, or repeat that of varieties which have been profitable, these names, “barbarian”, unchangeable, constitute a full stop for the people involved.

In this way, at the GEVES, it’s easy to perceive the tendencies of the various creators and the modern evolution of the rose: plants more resistant to diseases, with very long flowering periods; plants for the beginner and for those who do not want to spend too much money, with scarce maintenance, like the rose-bushes Multirose; perfumed corollas, with often unusual fragrances; variegated and changing petals, velvety effects, and colours often different on the two faces of the same petal; miniatures born for living in a pot in terraces and balconies; and even mini, “non returnable”, rose-bushes, done for growing up in greenhouse in a record time with very low costs, and to be immolated as “living bouquets”, between the domestic walls, like primroses, azaleas, or cyclamens.

Let us see, by category, some prestigious varieties.

The smallest rose-bushes, tall 20-25 cm, with little leaves, and an harmonious shrubby aspect, belong to the group Minijet of the Meilland; greenhouse “short cycle” plants, created incessantly by cutting, in only 10-12 weeks.

Between the last ones, the ‘Dandy Minijet’ (Meiselgra), produced in France, Germany and Australia, which exhibits even for 5 weeks, indoor, its Bengal pink corollas of only 3 and a half cm, rich of about forty petals; the ‘Jolly Minijet’ (Lavjack), created by Laver and commercialized by Meilland, with red vermilion flowers of 3-3,5 cm and about 40 petals, multiplied, for the moment, in Denmark, Germany and Australia; and the ‘Sweetlips Minijet’ (Meilipo), produced in Denmark, Germany and USA, with carmine pink flowers of 4,5-5 cm and even 68-70 petals.

Varieties which, at GEVES’, sustained by two weekly phyto sanitary treatments, repeated manuring, and a perfect water input with a computerized “drop by drop”, grow up well also in open air, in the mild climate of the Côte d’Azur, but which, unluckily, are generally “not returnable” plants, easy prey of the cold, fungi and parasites.

More rustic, particularly if grafted, is the ‘Dreaming Parade’ (Pouloral), a charming miniature of 25-30 cm, overflowing of pink corollas, created by Poulsen and cultivated in greenhouse, like the Minijet, with a cycle of eleven weeks; while are conspicuous, for sieze and resistance, the ‘Aquitaine Nirpaisage’ (Poulnoz), a grafted ground cover of 40 cm, always by Poulsen, which creates, at an almost continuous pace, simple small flowers, pink, but fading to the red, resembling to those of the brambles; and the ‘Tilla Meillandina’ (Meirulex), multiplied in Italy by the NINO SANREMO, last born of the prestigious range, with a nice, compact aspect, big leaves, and 6 cm corollas and 35-40 petals, with an unmistakable red-pink look.

Between the vigorous shrubs, tall even 80 cm, but with small flowers, is conspicuous the ‘Lavender Dream’ (Interlav), of Interplant, distributed by Delbard, with simple two and a half cm flowers, pink-lavender, with an intense perfume. A grafted plant, very resistant to the diseases, which contents itself of one thorough pruning every 2-3 years, similar, under various aspects, to the Multirose, with a rich and constant flowering after the exploit of May.

Between the big flower garden roses, the famous hybrids of Tea, make themselves conspicuous the Meilland’s the ‘Cristoforo Colombo’ (Meironsse), which, the last October, has got the gold medal of the international jury of the Genoa award for flourishing again rose-shrubs, with corollas of about 13 cm, 25 petals pink-apricot, gradating to the orange, and an exceptional resistance to the black spots disease, and the ‘The Mc Cartney Rose’ (Meizeli), which, commercialized by the end of 1991, has got, unique case in the history of the roses Meilland, 22 medals, six of which, golden.

A great resistance to the diseases, 12 cm “passion pink” corollas, with 20-25 petals, and, above all, a classic intense perfume which can be found also in the ‘Perfume Beauty’ (Meiniacin), new born, produced, for the moment, by Meilland only in USA, which has won, in Baden-Baden, the gold medal for the fragrance, and boasts 40 Bengal pink petals, with 13-14 cm of diameter corollas.

We cannot avoid to admire ‘Roxanne’ (Lapdal) of Laperriere, a very robust plant with flowers, golden at the centre, which gradate to the cream and then to the red; and attract the attention the transgressing new produces of Delbard: ‘Claude Monet’ (Jacdesa), and ‘Paul Cézanne’ (Jacdeli), the “Roses of the impressionist painters”, with changeable perfume and colours, both created by Jackson/Perkins-Bear Creek.

In the first one, with corollas of about 30 petals and 10-12 cm of diameter, it is impossible to find two flowers alike: a red-violet bud can reveal, when opening, unexpected yellow, orange or white dominants, and in the perfume, at the apex when the corolla is half-open, we can notice, close to the classical fragrances, those of vanilla, bergamot, lemon, or ripe peaches, but also a “green taste” of grass just mown, or of ivy leaves.

In the second one, with flowers of the same diameter, and about twenty petals, always striped, changeable and unforeseeable, the prevailing colours are the pink, the orange, the ochre, and a perfume of rose, with sweet touches of pear syrup, and spicy gradations of cinnamon.

The chromatic effect, Guy Delbard explains to me, is caused by a “jumping gene”, which changes of place in the chromosomes, and acts in such a way that the “geography of the colours”, the position, in the petals, of the red, yellow or white, are not codified from the beginning, as it usually happens, but due to the chance.

Also between the new roses with “bunch flowers”, the “jumping gene” of the Delbard makes havoc of first sight loves.

It is the case of the ‘Paul Gauguin’ (Jacdebu), always of Jackson/Perkins-Bear Creek, with about twenty petals with even tint, zonate, spotted or variegated of red, violet, or pink, on a white-cream background, the corollas, of about 8 cm, seem also here, “hand painted”, and exhibit perfumes sometimes sweet, sometimes spiced, of cloves or vanilla.

On the opposite front, the Meilland has just brought out in this gamut a masterpiece of classicism: the ‘Niccolò Paganini’ (Meicairma), perfect form, with 7-8 cm flowers, about 35 petals, and even 12 buds per stem; a generous reflorescence, without respite; and velvety cardinal-red petals. It has won the gold medal in Geneva, not to talk about the first prize of Lyon “The most beautiful Rose of France” and “Great Rose of the Century”.

The Meilland makes us a present, also here, of two blooming again jewels.

The ‘Arielle Dombasle’ (Meihourag), known in Italy as ‘Lea Massari’, with about 15 petals and 7 cm corollas slightly perfumed, red vermilion with a yellow heart, astonishes for the strong resistance to the diseases and the early blossoming, which, at the GEVES’, has shown a couple of weeks of advance on the average.

But the great triumph is the climbing mutation of ‘Rimosa’, or ‘Gold Bunny’ (Meigronuri), a yellow Floribunda of 1979. Rechristened ‘Grimpant Rimosa’ or ‘Grimpant Gold Bunny’ (Meigro-Nurisar), is conspicuous for the delicate perfume, an early blossoming, and the exceptional abundance of its bright corollas, of 8 cm of diameter, rich of 35-40 petals.

It has got a gold medal in Baden-Baden, and after Jacques Mouchotte, director of the researches at the Meilland’s, is the yellow sarmentose rose which carries more flowers in the world.