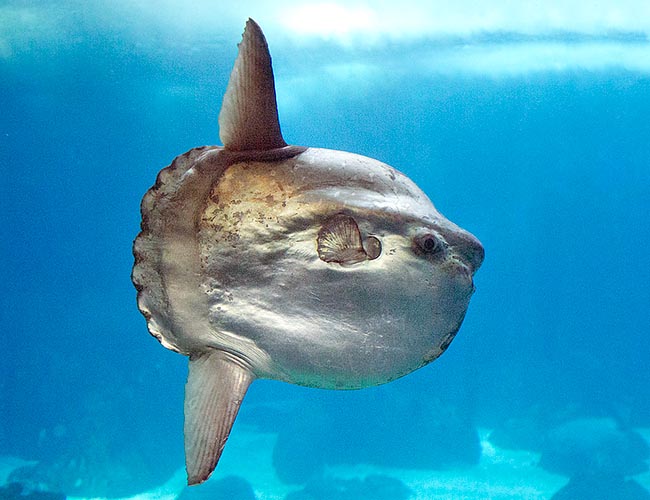 The Ocean sunfish (Mola mola Linnaeus, 1758) belongs to the class of Actinopterygii, the ray-finned fishes, to the order of Tetraodontiformes and to the family of Molidae which counts only 3 genera: Ranzania (one species only, the Ranzania laevis Pendant, 1776), Mola (two species: Mola mola Linnaeus, 1758 and Mola ramsayi Giglioli, 1883) and Masturus (only one species, the Masturus lanceolatus Liénard, 1840).

The name “mola” attributed to the genus and to the species, means in Latin “millstone, grindstone”, each one of the two overlapping big round stones, which have grooves with sharp edges, once used for grinding, with their rotation, the cereals or for shattering the olives. It is, in short, a fish shaped like a millstone.

The ocean sunfish is a marine species present in the tropical and subtropical waters of the whole world, Mediter- ranean included, with temperatures between the 12 and 25 °C.

Usually, it lives offshore, far away from the coasts, but recently a juvenile has remained for three days in the small Larvotto marine reserve, in the Principality of Monaco, and has gone into the deep only after having ended up in the newspapers. 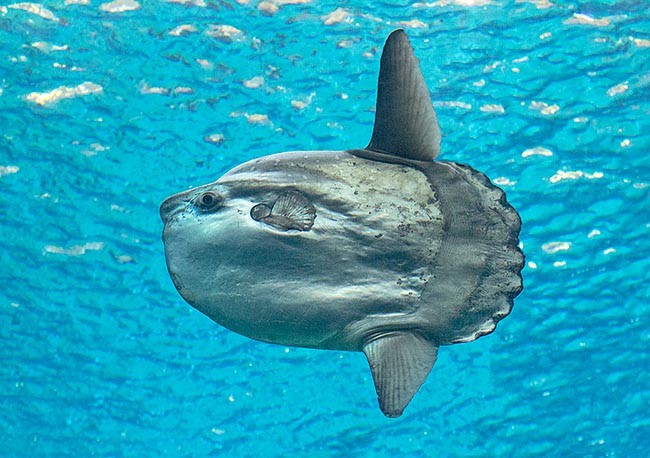 Cosmopolitan, it often surfaces for basking and getting rid of the parasites by the birds © Giuseppe Mazza

Even if it is not equipped with the swim bladder, the ocean sunfish can go down up to 480 m of depth, but it is not rare to see it in surface with the dorsal fin out from the waters and the body almost horizontal while basking. A technique which allows the fish to live also in rather cool zones, getting rid, at the same time, of many parasites thanks to the birds.

These are precise figures, concerning a male specimen fished in 1913, and seen that the females are usually bigger, these impressive dimensions might be ex- ceeded.

These two blades move synchronized from side to side and can advance the fish, when needed, with surprising speed. 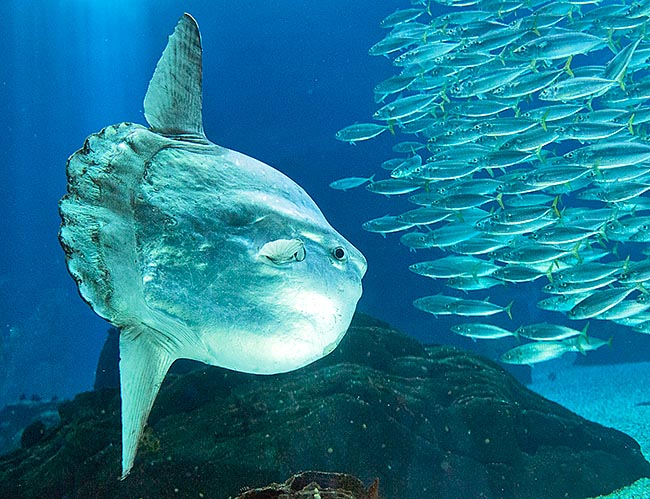 Has no swim bladder, but can go down up to 500 m of depth © Giuseppe Mazza

The ventral fins are absent and the pectoral ones, with 12-13 unarmed rays, are rounded, short, spatula-shaped, sustained by a protruding obliquely peduncle, close to the opening of the gills which is reduced to a small circular hole.

The eyes, with silvery iris, are fairly big but the mouth, not protractile, is proportionally very small. The teeth, partly fused together, form a cutting bony beak and the snout has, in the males, an odd fleshy appendage similar to a nose.

The colouration is very much variable. Usually, the two big fins, the back and the caudal part are brown with olive reflections, whilst the rest of the body is more or less silvery.

The skin, thick and rough, is covered by very small, not overlapping scales, practically inexistent, and supported by a cartilaginous layer which protects, like a cuirass, the flabby and watery flesh. It seems to be made of leather, rich of incrustations and scars, and even if it secretes protective mucus it is attacked by various species of parasites, at times even internal.

In 2004, just to say, at the Acores they have found an individual having the oesophagus encrusted by cirripeds, to be precise a colony of Lepas anatifera, which by sure was taking advantage from the transit of the food and the well protected position.

Females may spawn even 300 million of eggs, but it stands in very serious extinction risk © Giuseppe Mazza

It is a shy and peaceful fish living solitary or in small schools. It seems that its choice dish is the jellyfishes, but it nourishes also of planktonic crustaceans, echinoderms, salemas, squids and fishes, in particular young eels, not to forget the sea weeds.

The females may spawn even 300 million of eggs, fecundated to the best by the male. The planktonic larvae get through three stages of development, showing traditional fins and spines similar to sea urchins before getting the look of the adults.

In nature the ocean sunfishes are easy preys of the killer whales, of the sea lions and of the sharks. Even if some parts are used in the Chinese medicine, they are not fished because their flesh, little appetible, is also poisonous as is the case of the balloonfishes and the puffers belonging to the same order of the Tetraodontiformes.

This does not prevent the fact, unluckily, that they drop into the nets of the fishing industry and the members of the species are nowadays rapidly decreasing, with a very high vulnerability index of 82 on a scale of 100.