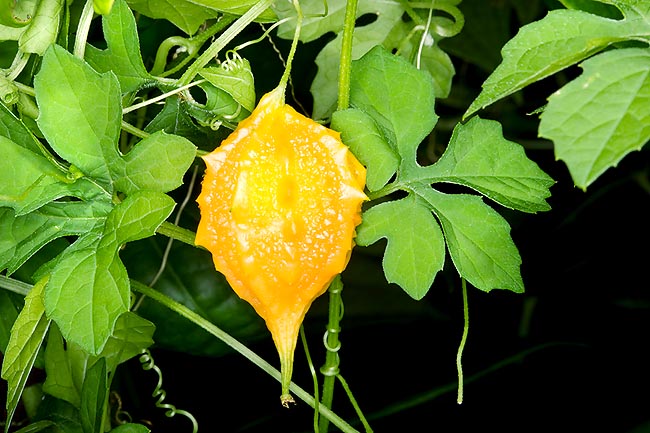 The name of the genus comes from the Latin verb “mordeo” (tense “momordi”) = to bite, to tear with the teeth, with reference to the seeds whose grooved surface and the indented margins seem to be the consequence of a bite; the name of the species is the name under which it was known and that Linnaeus has maintained.

The Momordica charantia L. (1753) is an annual herbaceous climber, with a pungent and rather unpleasant odour, with taproot and ramified angular stems, up to 3-4 m long, which anchor with axillary, up to about 15 cm long, tendrils.

The leaves, on 2 to 5 cm long petioles, are alternate, palmate, more or less pubescent like the stems, 3-8 cm long and 4-12 cm broad, deeply parted in 5 to 9 oblong, ovate or obovate lobes, narrower at the base, with wavy edges.

The fruit is a dangling berry, ovoid or oblong, hollow, of white or green tending to the orange-yellow when ripe, colour, 3-8 cm long (in the cultivated varieties up to 30 cm and even more), with the surface crossed by 8-10 longitudinal ribs with triangular tubercles. The fruit opens spontaneously when ripe (dehiscent), in three valves, starting from the lower extremity, to uncover 10-30, 0,5-1 cm long, seeds, 0,3-0,6 cm broad, of brown or black colour, covered by an aril formed by a humid and sweet pulp (contrary to the fruit, very sour and inedible at this phase) of a bright red colour which, attracting birds and small mammals, has the function to facilitate their dispersion. It reproduces by seed planted directly at the depth of 1-2 cm; the flowering begins 4-6 weeks after the germination. Due to its facility of reproduction, in many zones it is considered as a weed.

Plant cultivated since remote times for alimentary purposes as well as for various utilizations in the popular medicine.

It is cultivable in the tropical and subtropical climate zones with high rainfalls on well drained soils or under light shading; of fast growth, it is able to cover, in very short time the vegetation or the supports which it climbs.

In many countries of Asia and South America, where it has naturalized, the leaves and the fruits are variously consumed, the fruits are to be collected before the complete ripening, when they have not yet begun to change colour (the ripe fruits are uneatable and toxic); in order to mitigate their sour taste, due mainly to a substance called momordicin, the fruits are usually immersed in salted water and in addition the superficial layer with the tubercles is taken off, as the said substance concentrates more there; also the flowers and the young buds are employed for aromatizing various dishes and, together with the leaves, are consumed cooked as a vegetable.

The fruits contain carbohydrates, proteins, vitamins (in particular vitamin A and C) and minerals; the extracts have anti-oxidant, anti-microbial and anti-viral properties.

Its utilization as a medicinal plant for various pathologies is very ancient, especially as hypoglycaemic agent in the diabetes mellitus, however, its excessive utilization causes serious collateral effects: after some laboratory researches it appears the substances it contains may have a potential use in the treatment of certain cancers.

The plant has also a limited ornamental use, in particular for its foliage and the odd fruits; for its fast growth and the rather large leaves, it may advantageously employed also for creating temporary shields during summer.