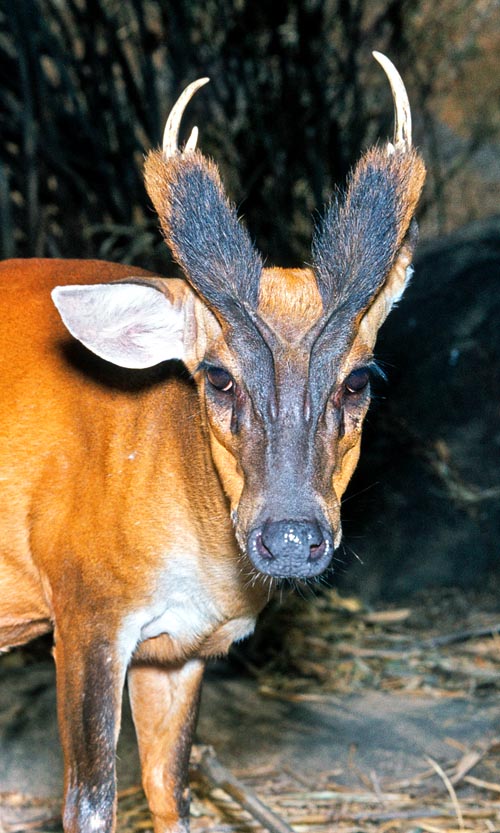 The Southern red muntjac or Indian or Sunda (Muntiacus muntjak Zimmermann, 1780) is a small and charming deer belonging to the order of the Artiodactyls (Artiodactyla), to the family of the Cervids (Cervidae), to the subfamily Cervinae, to the genus Muntiacus and to the species Muntiacus muntjak. There are about 15 subspecies.

The name comes from the local Indonesian epithet utilized for indicating this species and means “small deer”.

To this genus belong 16 species and several subspecies quite similar among them of the size and shape of small deer with the males having small antlers and canine teeth rather developed.

All species are Asian with distribution in most of the southern and eastern portion of the continent, from India to Vietnam including an ample part of the Chinese territory and getting to include many islands as great as Java, Borneo, Bali, Sumatra, Taiwan and the small ones adjacent to the aforementioned area. The Indian muntjac or of the Sunda, as indicated by the name, is distributed in vast part of the Malaysian archipelago (Borneo, Java, Bali, Sumatra and on many small islands of the same) but is present, with variable densities and with the various subspecies, also from India to the Malaysian peninsula and is considered as one of the most diffused species.

On some islands it shares the area with other very similar species and from which it hardly distinguishes, such as the Bornean yellow muntjac (Muntiacus atherodes) endemic to this island. In other zones, such as southern Thailand and Burma, the presence of the Southern red muntjac is poorly documented or is only presumed.

Despite being a common species, in some zones of its area, it has disappeared (Singapore and deforested zones) due to the destruction of its habitat or due to the hunting done for the deliciousness of its flesh as well as for being considered as a noxious species for the impact it has on some cultivations (browsing and debarking them).

This species is called also with the name of Southern red muntjac to distinguish it from the Northern red muntjac (Muntiacus vaginalis) from which has been separated as a species on its own; as well as it has been separated, from the classification point of view, from the very rare and poorly known Sumatran muntjac (Muntiacus montanus) endemic to this island. The classification of the extant species of muntjacs has gotten frequent changes and updating also because, despite being not microscopic mammals, some species have been discovered and classified only recently, that is after 1990. For instance, the Annamite muntjac (Muntiacus truongsonensis), known only on the mountain chain of Laos and Vietnam from which it gets the name, had never been described before 1998 and the Putao muntjac (Muntiacus putaoenis) has been described for the first time, in northern Burma, in 1999. The fossils indicate that in the past this genus was present also in Europe and in some way we can say that, because of man, has partially come back due to the introduction of the Reeves’s muntjac (Muntiacus reevesi) which has been freed in some European countries. Presently, the species has been settled in Great Britain.

The Southern red muntjacs are tendentially shy and reserved animals living deep in the tropical forests, including the pluvial and monsoonal ones and in the hilly and mountainous habitats with thick vegetation, near water streams. They are very nimble and enter, with surprising agility, the thickest vegetation, disappearing in one second, if disturbed or if they feel a danger. In some areas and in some habitats, they are mainly diurnal even if the top of the activity is shown during the first hours of the morning and those of the dusk, which, generally are quieter. In the habitats where they are disturbed during the day, they have no problem to become animals with mainly nocturnal habits.

The Indian muntjac has a height at the withers of about 50-70 cm and a length of about 90-140 cm. It has an average weight of 15 to 30 kg. Seen the size, it has a rather low and slightly elongated and cylindrical shape; the body results rather short and solid with dorsal profile slightly, physiologically, kyphotic with the pelvis slightly carried “under itself”. The legs, rather short, are fairly thin but strong and end in a small cloven-hoof. The coat is brown-reddish-golden, rather glossy. In the ventral parts of the body, from the chinstrap to under the neck to all the ventral part of the trunk and the inner face of the legs, the colouration is whitish. Mainly in the males, the dorsolateral part of the front legs and the distal part of the hind legs are dark brown-black. Also the dorsal part of the snout, in both sexes, is browner and at a certain point, just before the level of the eyes, it shows two black lines. These ones, on the head of the female, end in two always dark triangles that expand a little at the level of two bony buttons slightly raised and covered by tufts of longer hairs. The males have, they too, on the head, the two black lines widening like a V prolonging towards the back along the hair covering the bony appendices that form the base of the antlers. Usually, the male is more reddish-yellowish than the female. 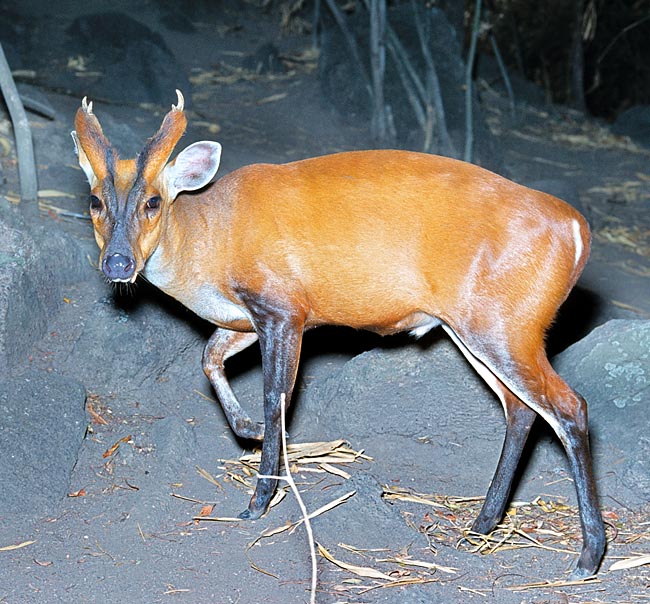 Archaic species, barks like a dog and has dusk or night habits © Giuseppe Mazza

The tail is about fifteen centimetres broad, is reddish dorsally like the rest of the coat, below it has a pure white, much evident, colour. The white of the under-tail prolongs with the white zone of the perineum which becomes evident when the individuals raise the tail during the escaping races. The male has two quite short and stocky (10-15 cm long) antlers with a couple of short hooked and sharp ramifications. The antlers generate from two long pedicels which have a bony base and are permanent as they belong to the bones of the skull. The family of the muntjacs is somewhat primitive and is characterized, besides the rather reduced dimensions and the presence of little developed antlers also by the presence of rather long (2-3 cm) and protruding canines. These cutting teeth are utilized as means of offense by the adult males which with them may cause even deep wounds. The eyes are fairly big, with dark brown iris, and watery look. The muzzle is black and glossy; the ears are rather ample, ovaliform and scarcely covered by hair.

The southern red muntjac is an animal living solitary or in small groups (in this case, formed by females of mixed with immature males). It has a diet based on vegetal aliments as it mainly nourishes of leaves, buds and twigs of various plants but also of fruit fallen to the ground and of seeds it skilfully gathers with its long tongue (when extended it gets to lap the eyes). Both sexes can emit sounds similar to a strong barking of dogs and so much typical that these small deer are known also with the name of “baying or barking deer”. These sounds which may be insistently repeated even for one hour and more, have the probable aim of warning the conspecifics to keep away and the possible predators discovered by the potential prey itself. The fact of emitting this sort of barkings, united to the presence of the protruding fangs and to the fact that this animal has a rather territorial character and is consequently aggressive in the regards of the conspecifics deemed as competitors, has meant that this species was sometimes described, erroneously, as having also carnivorous habits.

The muntjacs are not seasonal from the point of view of the oestrum and of the reproduction as they can usually reproduce during the whole year. The pregnancy lasts about 6 months and the delivery concludes with the birth of only one young, the twins being very rare. The young upon their birth weight little more than half a kilo (550-650 g) and have a maculated reddish brown coat on the dorsal part of the trunk with paler tawny-yellowish spots; their look is delicious as they look like mini Bambi!

It is important to know that the reproductive strategy of this species is similar to that adopted by the Euro-Asian roe deer (Capreolus capreolus) that is, the newborns, during the first periods after the birth entrust their survival to the mimetic look strengthened by the fact of keeping motionless and alone on the ground. The mothers, in fact, leave the young in places deemed safe and reach them, prudently, only for nursing them. The young will accompany and follow the mothers only when they will be some weeks old and will be, therefore, stronger and nimbler. It is important to know this reproductive strategy in order not to consider the eventually sighted alone, isolated and motionless newborns as abandoned young. The young is weaned around the 6-7 months of age and when one year old, or little more, is already capable to reproduce. These cervids are able to live up to 15-18 years and can be bred, in captivity, relatively easily.