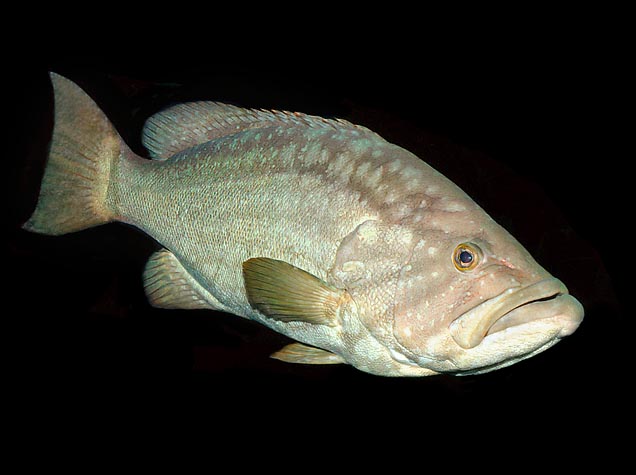 The Mottled grouper (Mycteroperca rubra  Block, 1793) belongs to the class of Actinopterygii, the ray-finned fishes, to the order of Perciformes and to the family of Serranidae.

The name of the genus comes from the Greek “mykter” = nose, and “perke” = perch with reference to the profile of the fish recalling that of the perch.

The name of the species, “rubra”, comes from the Latin “ruber” = red, with reference to the background colour of the fish.

Its distribution is very ample. Besides the Mediterranean, Black Sea excluded, we find it, after the Gibraltar Strait, along the warm European Portuguese and Spanish coasts, up to the Galicia, and southwards, passed Madeira, the Acores, the Canary and the Cape Verde Islands, along the entire African coast, up to Angola.

Like almost all groupers, it loves the rocky coasts, but it is less territorial, less tied to a burrow, and we find it often on the sandy bottoms and in the prairies of Posidonias (Posidonia oceanica) usually between the 15 and the 40 m of depth. After some, it might go down even up to 200 m.

The mottled grouper usually reaches the 80 cm, but they have caught a specimen of more than 140 cm and 50 kg. 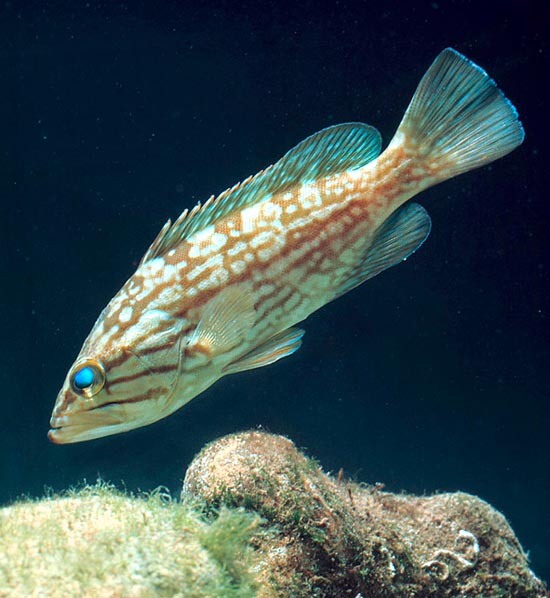 The body, impressive and fusiform, shows an enormous mouth, with a long protruding mandible, well visible in the adults. It has two rows of teeth, bigger on the inner one, whilst the jaw has three rows, with the biggest teeth on the outer side. And, as if that was not enough, in order to better seize the preys, on the front are located four long caniniform teeth up and two down below. Also this grouper has only one dorsal fin with spiny rays on the front, 11 in this case, and the second part unarmed, is much higher, with even 17 rays. The anal fin, shorter, has an analogous configuration, with only 3 spiny rays and a dozen of soft ones. The pectoral and ventral fins are unarmed, spatulate, and the caudal, almost rectilinear in the young, tends then to become concave.

The background colour, reddish, is more intense on the back in the adults. On the sides, especially in the young, some dark strips are noted, more or less continuous, converging towards the operculum, where three wide strips are always well visible. The similar ones, present in the juvenile phase of the Epinephelus costae, are thinner in comparison.

The Mycteroperca rubra nourishes mainly of cephalopod molluscs and of young fishes, sparids especially.  Little is known about its reproduction, apart the fact that the eggs are pelagic.  Also this species displays a protogynous hermaphroditism, with females that, while ageing, tend to transform in males. The vulnerability index of this species is of 46 over 100.