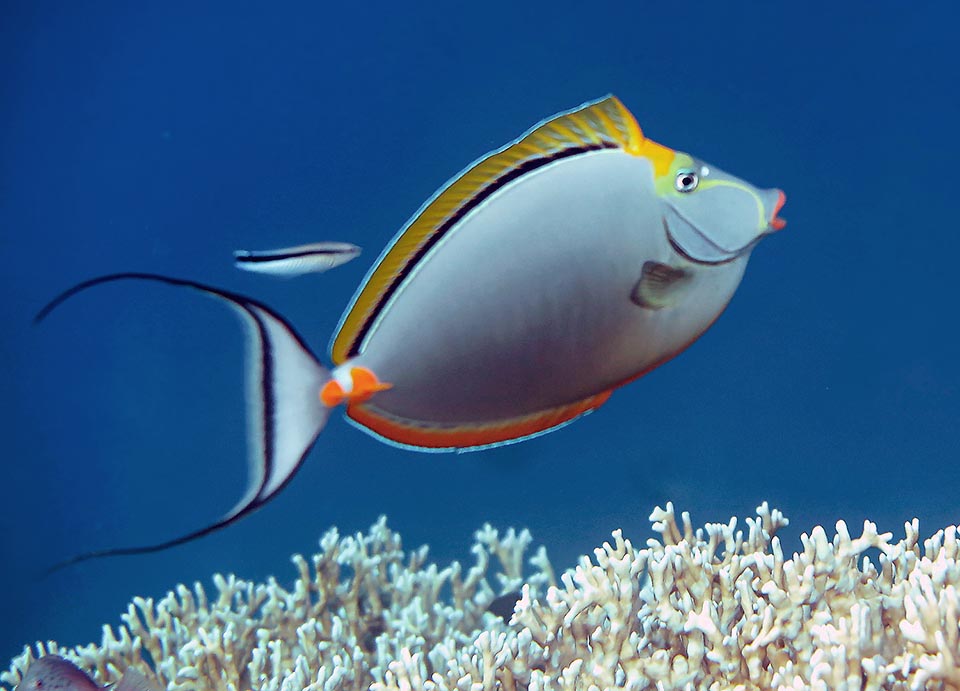 Naso elegans (Rüppell, 1829)  belongs to the class of the  Actinopterygii, the ray-finned fishes, to the order of the  Perciformes, and to the family of the surgeonfishes, the Acanthuridae, known for their blade as sharp as a razor, present on both sides of the caudal peduncle and used for wounding with quick lashes the aggressors.

A well characterized and rich of bright colours family, that presently counts, in 2020, 6 genera and 84 species, about twenty of them having been grouped in the subfamily of the Nasinae, the so-called unicornfishes, due to the strange and elongated protuberance present in the snout of some species, such as Naso brachycentron, Naso brevirostris or Naso unicornis.

They all do belong to the same genus, Naso that comes, as in Italian, from the Latin word “nasus”, with obvious reference to this anatomical peculiarity. The specific term, elegans, elegant in Latin, instead reminds, should we need it, that this fish has a splendid livery. 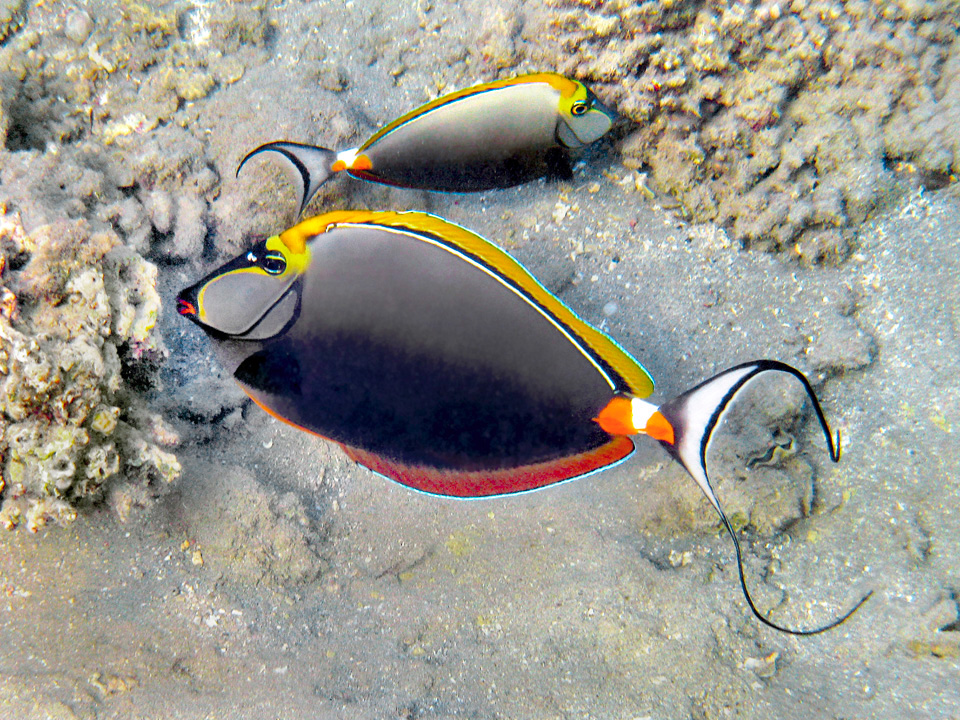 Naso elegans was once considered as a variant of Naso lituratus, but now it has been distinguished from this last because of its colouration, some small anatomical differences and the distribution area.

In fact, we find it only in the Red Sea and in the tropical waters of the Indian Ocean up to the Cocos Islands, Christmas Island and South-East Indonesia, being this the line of boundary where the two species often hybridize, whilst the area occupied by Naso lituratus extends to the Indo-Pacific up to almost the coasts of Central America.

Therefore, indicatively, Naso elegans is present from the Red Sea and the Gulf of Aden, along all African coast up to South Africa. We find it in Madagascar, the Seychelles, the Maldives, in India and in Sri Lanka, Myanmar, Thailand and in the Andaman Islands up to, rightly, South East Indonesia. 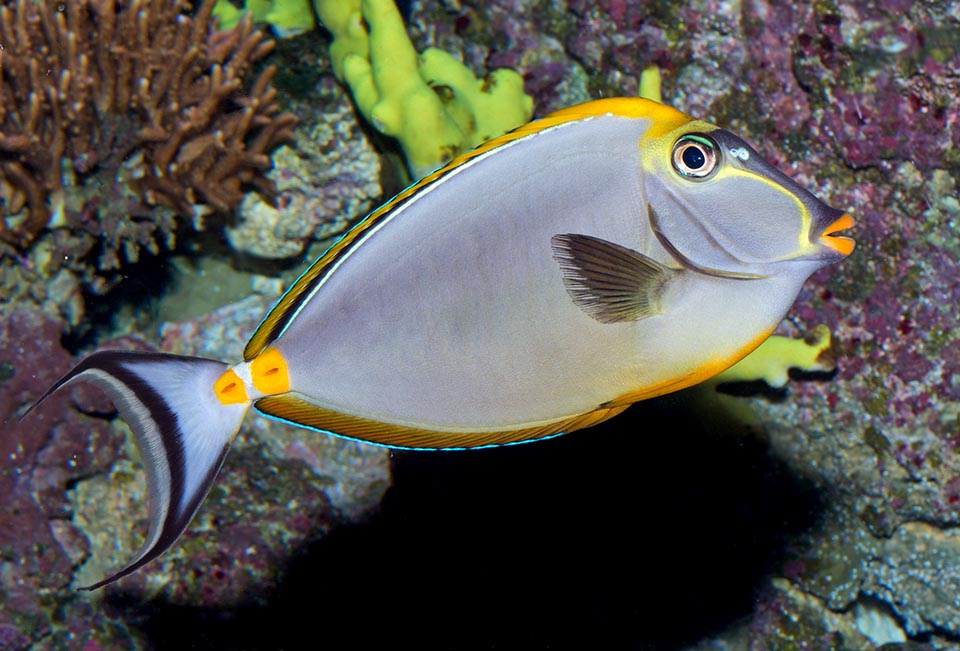 Of peaceful nature, it eats benthic algae, mostly the brown ones of the genera Dictyota and Sargassum, without disdaining detrita © Giuseppe Mazza

It goes floating between the madreporic formations and the rocks, usually at 5-30 m of depth, but, at tims, even in shallower waters where do grow the algae it nourishes of. The adults can be found also in the outer side of the reefs, whilst the young prefer the lagoons and shallow waters with sandy and clastic bottoms.

Naso elegans rarely exceeds 35 cm, even if it may reach 45 cm of length. The body is oval, a little almond-shaped, flat like all unicornfishes, but here the characteristic protrusion is absent. Moreover, the caudal peduncle does not have the retractile blade typical to the surgeonfishes, replaced by a couple of sharp claws facing the head. 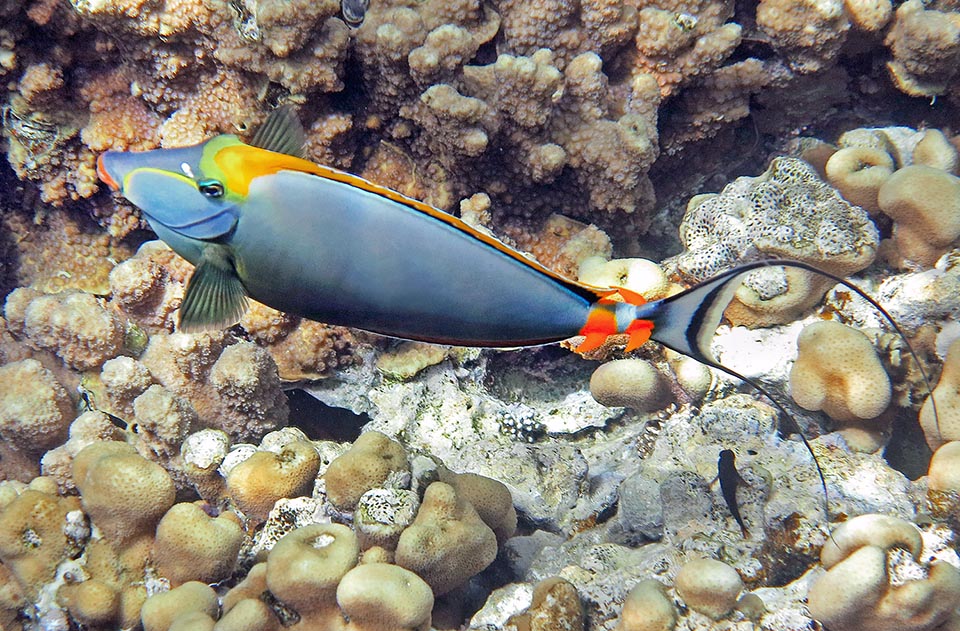 The caudal fin is lunate with elegant filamentous lobes that dramatically grow with the age in the adult males.

Apart from some differences in the rays, it might be mistaken at first sight for a Naso lituratus, but the colours of the fins are different, here the dorsal is yellow followed below by a black band and then by a blue small edge, present also at the apex, whilst in Naso lituratus, the black band is much wider, centred between two clear bands. 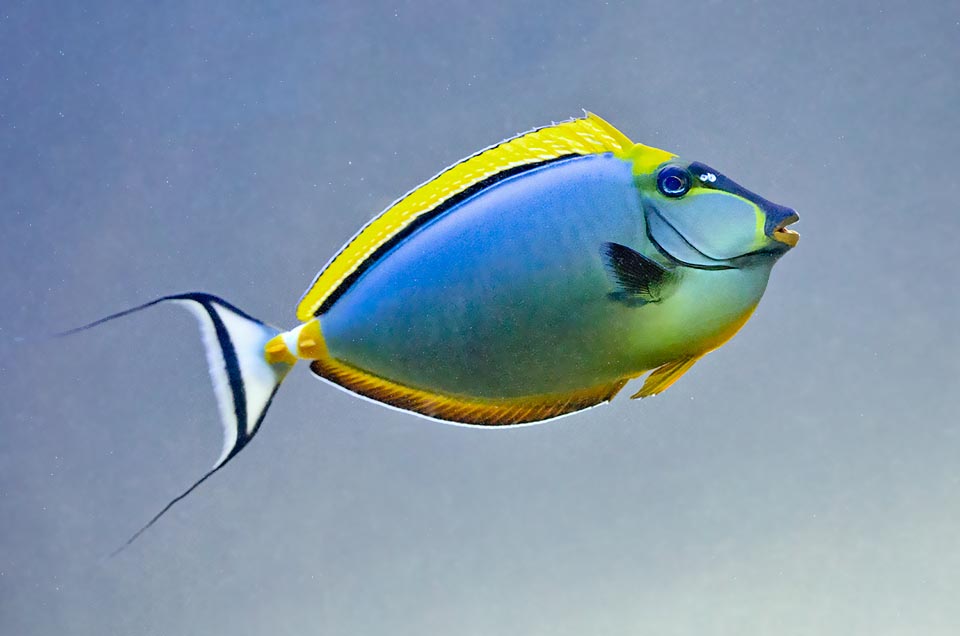 The luminous yellow dorsal fin, followed below by a black band and then by a small blue edge, distinguishes it at sight from Naso lituratus, that has a much wider black band, centred between two clear bands. Moreover, the caudal fin is white with black vertical band whilst in Naso lituratus is grey with yellowish vertical band © Mazza

The colour of the body may change instantly thanks to the chromatophores, depending on the mood of the fish or the mimetic necessities. Usually, it is grey, darker on the ventral side, at times tending to brown, more or less red, or greenish blue.

The lips are orange, followed by a dark small mask edged of yellow that widens on the head towards the eyes. The threatening orange does stand out on the caudal peduncle to remind the predators of the presence of the two blades, claw-shaped, of flame red colour. 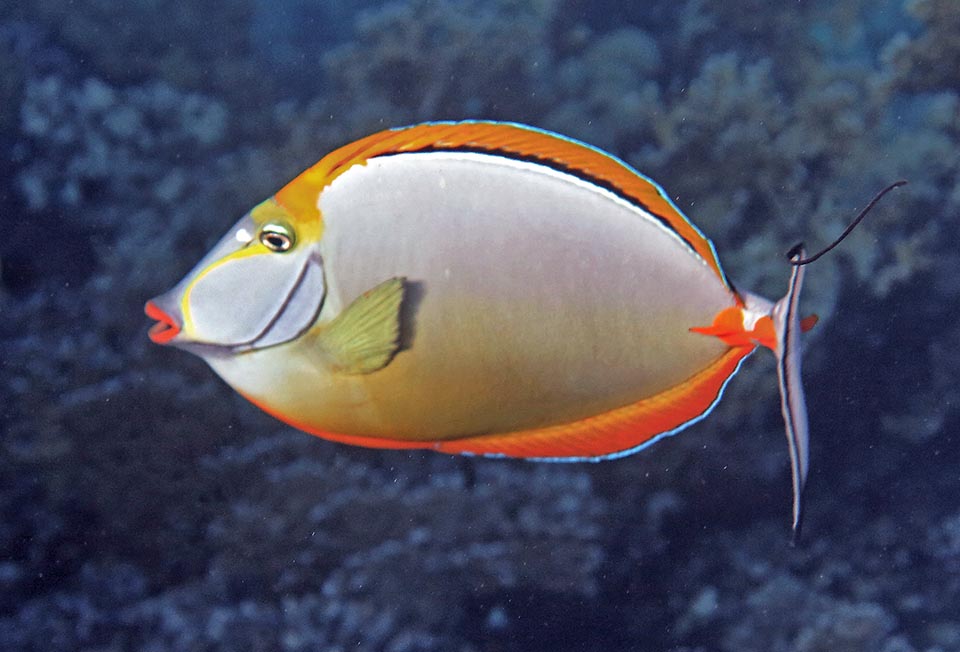 The colour of the body may change instantly thanks to the chromatophores, depending on the mood of the fish or the mimetic necessities. Grey in whole, darker on the ventral side, but can tend to brown, more or red, or greenish blue. By night, to hide, is dark brown with white dots lined in different way depending on the stress © Gianemilio Rusconi

Great swimmer, Naso elegans lives solitary, in couples or in small groups that can gather in schools during the reproductive period. It goes swimming mixed with other acanthurids nourishing of benthic algae, especially the brown ones belonging to the genera Dictyota and Sargassum, without disdaining the detrita.

It is thought that the reproduction takes place in groups, like for Naso lituratus. Aggregations would be formed at dusk with couples that go up together to the surface for freeing the gametes. The eggs, pelagic, are entrusted to the currents and the larval phase lasts almost two months. As a consequence, the juveniles sgrow in often distant sites colonizing other reefs with a life expectancy of 20-30 years. 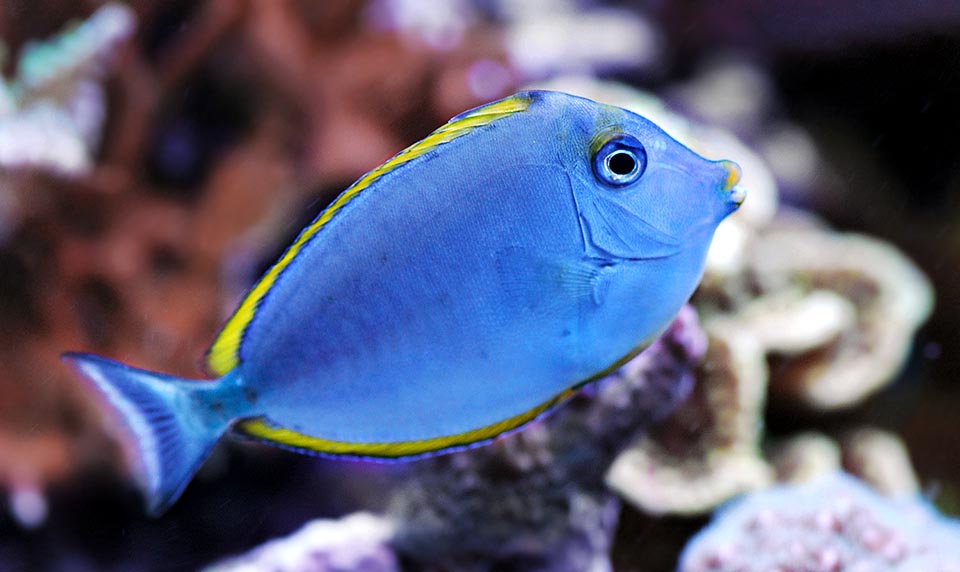 A juvenile. The pelagic eggs are entrusted to the currents and the larval stage lasts almost two months. So, the young grow in often distant sites, colonizing other reefs © Jose Luis Bello Arranz

Of peaceful nature, Naso elegans is often a guest of the great public aquaria, the only ones in condition to ensure them, seen their feeding and their size, a decent life.

In fact, the ill-fated specimens that end up in the domestic aquaria, mostly die of hunger.

Apart from aquarists and natural predators, this species is locally threatened by fishing. Resilience is mediocre, seen that are sufficient 1,4-4,4 years to form again the populations decimated by the events, and presently, in 2020, the vulnerability index marks 46 on a scale of 100.