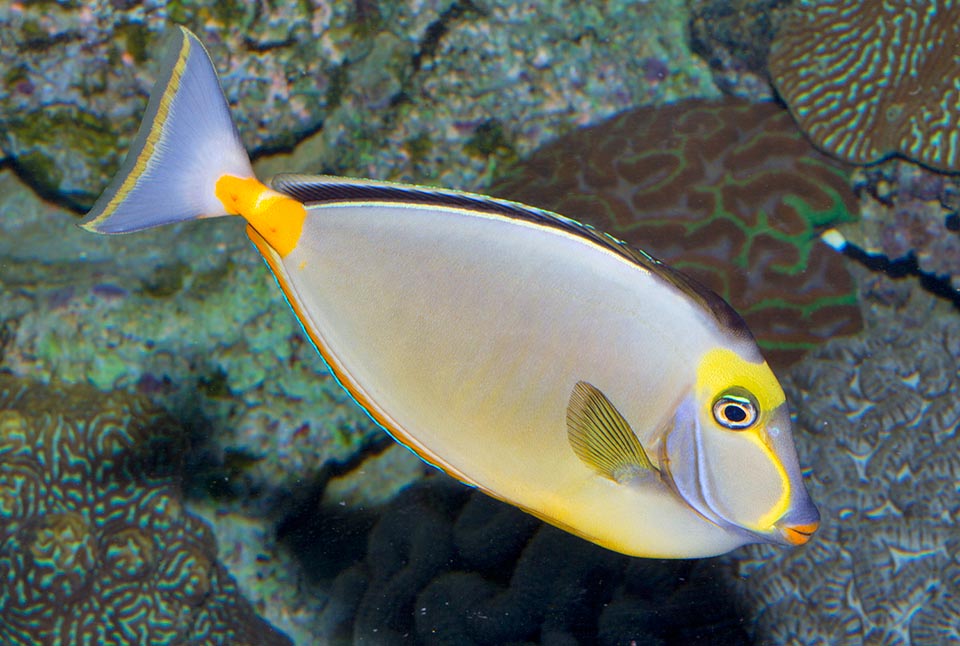 The Orangespine unicorn (Naso lituratus Forster, 1801) belongs to the class of Actinopterygii, the ray-finned fishes, to the order of the Perciformes, to the family of Acanthuridae, the surgeon fishes, so called because of the sharp blade they have on the caudal peduncle, that counts 6 genera and more than 80 species, and to the subfamily of the Nasinae, the unicorn fishes, with the only genus, Naso, and about twenty species.

The generic name Naso comes from the Latin “nasus” = nose, with reference to the characteristic frontal protuberance of the Nasinae, at times similar to a nose.

The specific name lituratus, comes from the Latin “lituro”, to cancel, hence “cancelled” with possible reference to the fading dark vertical stripes, barely hinted on the sides, that appear almost cancelled.

The orangespine unicorn fish has a very wide distribution. 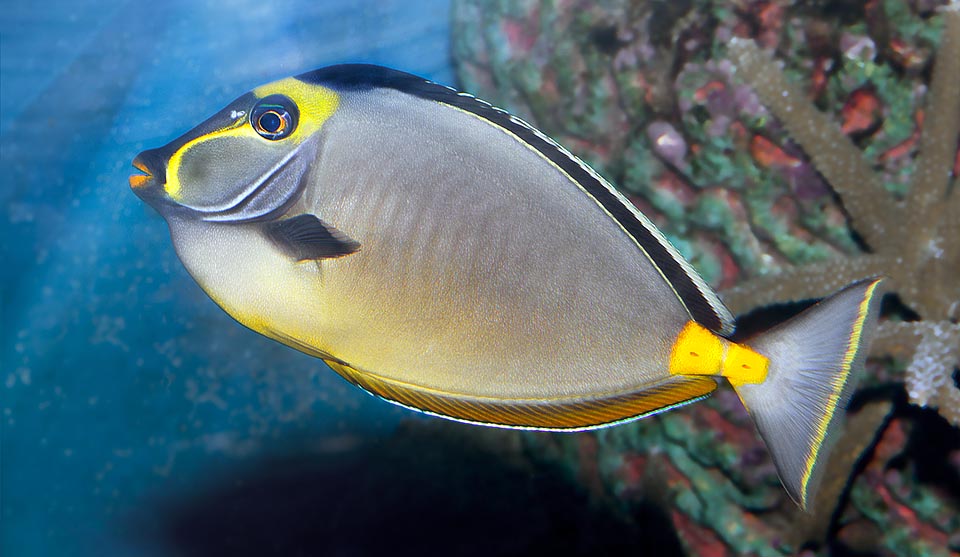 The background colour is very variable. The dark vertical stripes on the sides are often fading, hence the name "lituratus" from the Latin "lituro" meaning to cancel © Giuseppe Mazza

Once they talked about its presence in the tropical waters of the Indo-Pacific, but nowadays the populations of the Indian Ocean have been placed in a similar species, the Naso elegans (Rüppell 1829).

The orangespine unicorn fish twirls among the madreporic formations and the rocks from 5 to 30 m of depth, where grow the algae it nourishes of, but can even go down up to about 90 m 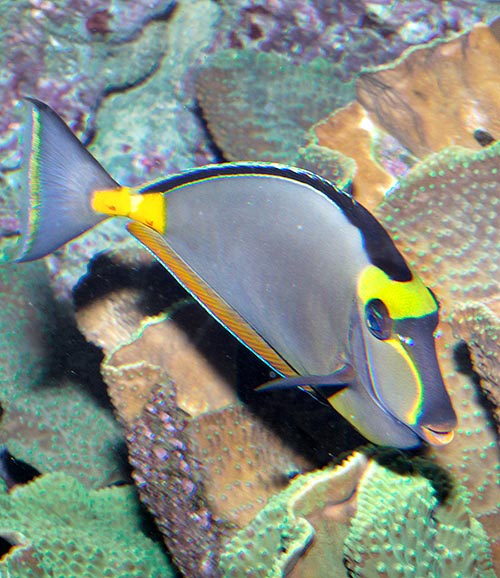 The caudal fin has, in the translucent zone, a typical shimmering orange-yellowish vertical band instead missing in the Naso elegans species © Giuseppe Mazza

Some specimens exceed the 45 cm, even if usually the size is more modest.

The oval and flattened body corresponds to the look of the family, but it is an atypical Nasinae due to the absence of the frontal horn. Moreover, the caudal peduncle does not have the retractable blade characteristic of the surgeon fishes but a pair of solid sharp spines on both sides.

The basic colour is very variable, depending on the regions and the habitat, and may change instantly depending on the mood of the fish. Usually it is grey, at times with greenish traits, tending brown or blue.

The changing juvenile livery is greenish brown with a big white zone on the head, another, smaller, between the eye and the lips and white spots scattered on the sides.

The double sharp blades of the caudal peduncle are separated by a white stripe and emphasized by two yellow-orange zones present in all adults. Well visible also from far away due to the swaying motion of the tail reminding to the potential aggressors that it is better to look for other preys because here, on each side, stand two sharp scalpels.

Great swimmer, with movements reminding at times the Sgombrids, the Naso lituratus lives solitary or in numerous groups, at times mixed with other acanthurids. It nourishes of all sort of algae, especially the brown ones belonging to the genera Dictyota, Sargassum and Lobophora, but also of zooplankton and small invertebrates, as confirmed by the substitute foods it accepts, though grudgingly, besides the vegetal ones, in the aquarium life. 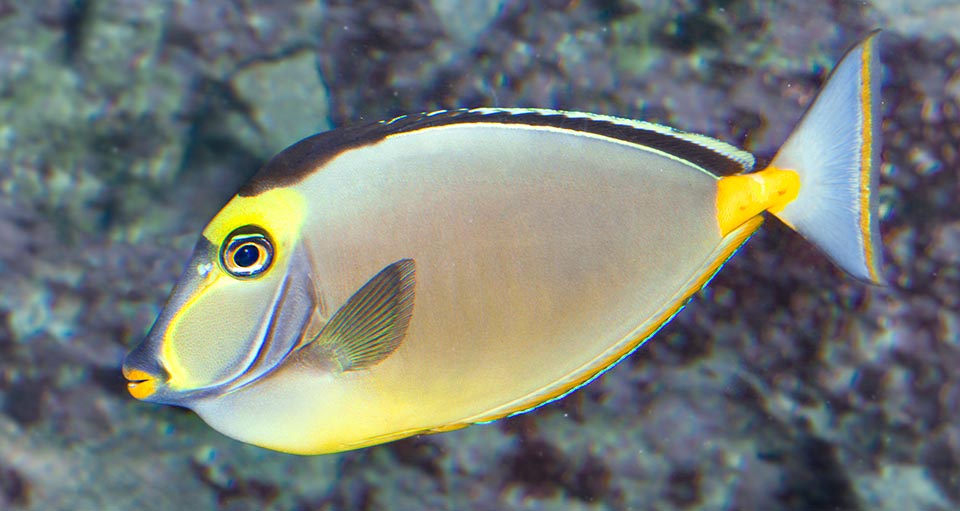 The big specimens are fished due to the excellent flesh, though at ciguatera risk, the young for the aquaria market. Species not yet endangered but to be monitored © Giuseppe Mazza

The reproduction may occur in any period of the year in pair or in group and along the Australian coral reef, have been observed huge aggregations about. The eggs, fecundated on the seabed or in open sea, are entrusted to the currents.

Of peaceful nature Naso lituratus is often a frequent guest of the great public aquaria, the only ones capable to ensure it, seen the alimentation and the size, a decent life. The unfortunate specimens that end up in the home aquaria, in fact, die mostly of hunger. Besides by the aquarists, the orangespine unicorn fish is threatened by fishing, because its flesh is excellent, although at risk of ciguatera, a serious poisoning caused by toxic algae that in some locatioons or seasons may become its choice dish. The resilience of the species is discreet, in fact are sufficient 1,4-4,4 years for rebuilding the populations decimated by the events, but the degradation of the reefs and the fishing render it moderately vulnerable with an index of 34 on a scale of 100.