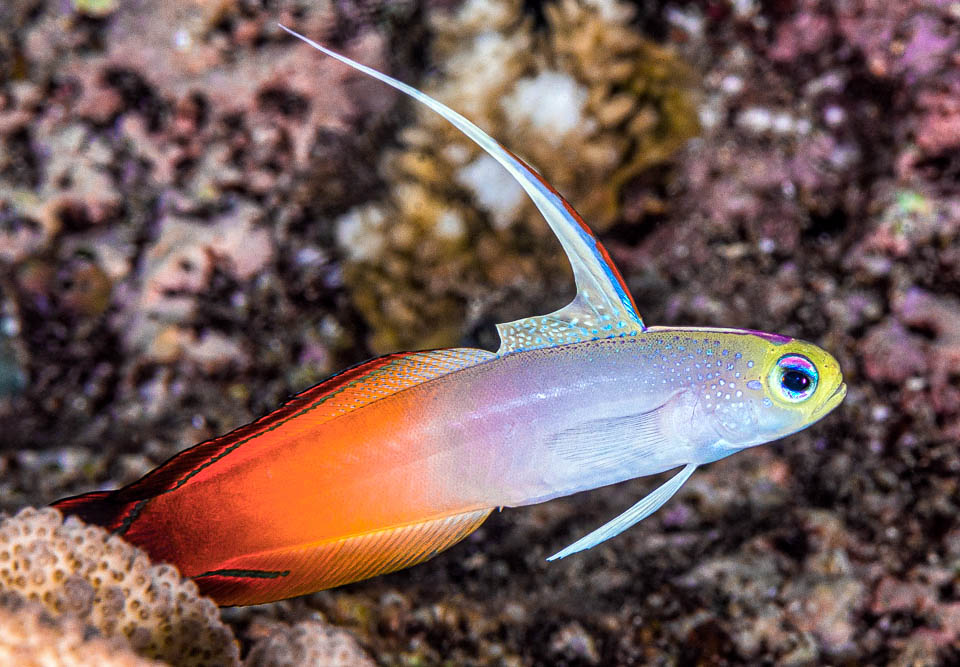 The Fire goby is a benthopelagic species of the tropical Indopacific. Less than 9 cm long, it predates zooplankton over the den where disappears upon the least danger sign © François Libert

With about 2.000 species the Gobiidae have been for a long time the largest family of marine fishes.

Something had to be done for the zealous taxonomists, and so the Fire goby or Fire dartfish (Nemateleotris magnifica Fowler, 1938) belongs presently for some to the order of Gobiiformes, family Gobiidae, subfamily Ptereleotrinae, and, conversely, for others is a Gobiiformes, belonging to the suborder Gobioidei, family Microdesmidae Regan, 1912 and subfamily Ptereleotrinae that includes the genera Cerdale, Clarkichthys, Gunnellichthys, Microdesmus and Paragunnellichthys, whilst the genera Aioliops, Navigobius, Nemateleotris, Oxymetopon, Parioglossus and Ptereleotris have been assigned to the subfamily Microdesminae. 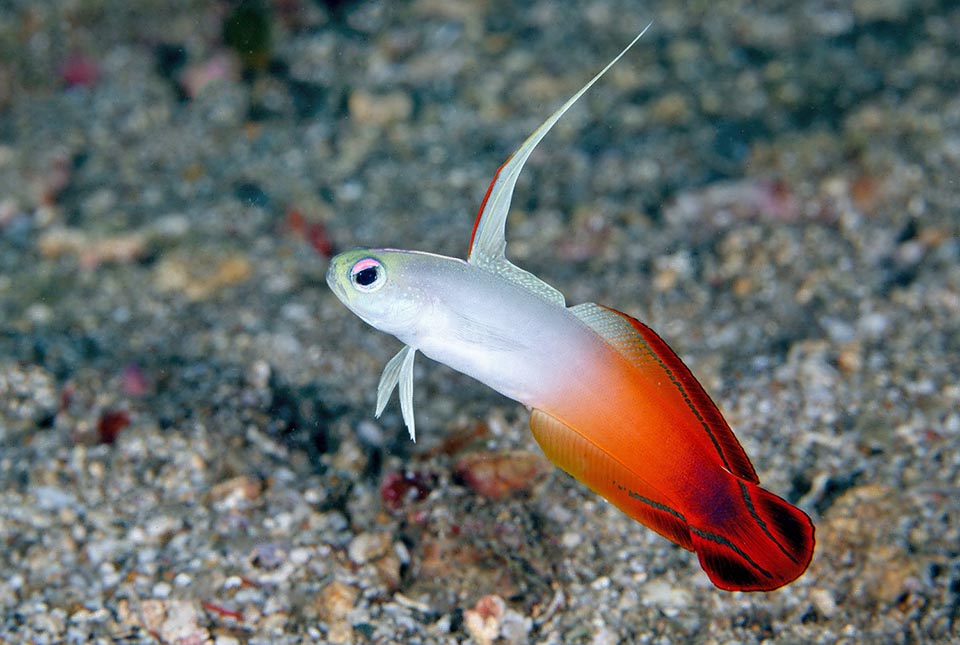 It doesn’t have, like in the Gobiidae family, the pelvic fins fused like a sucker to stick to the rocks, and the first dorsal fin has a huge erectile ray to surprise the intruders © Jim Greenfield

The family Microdesmidae finally counts in this way 86 species, characterized by the cigar-shaped body, big eyes and round head, present in the tropical seas with some sporadic trespassing in brackish waters.

Some can graze the 30 cm, but usually they are small 5-12 cm fishes at times characterized, like the Fire goby, by the particularly long first rays of the dorsal fin. 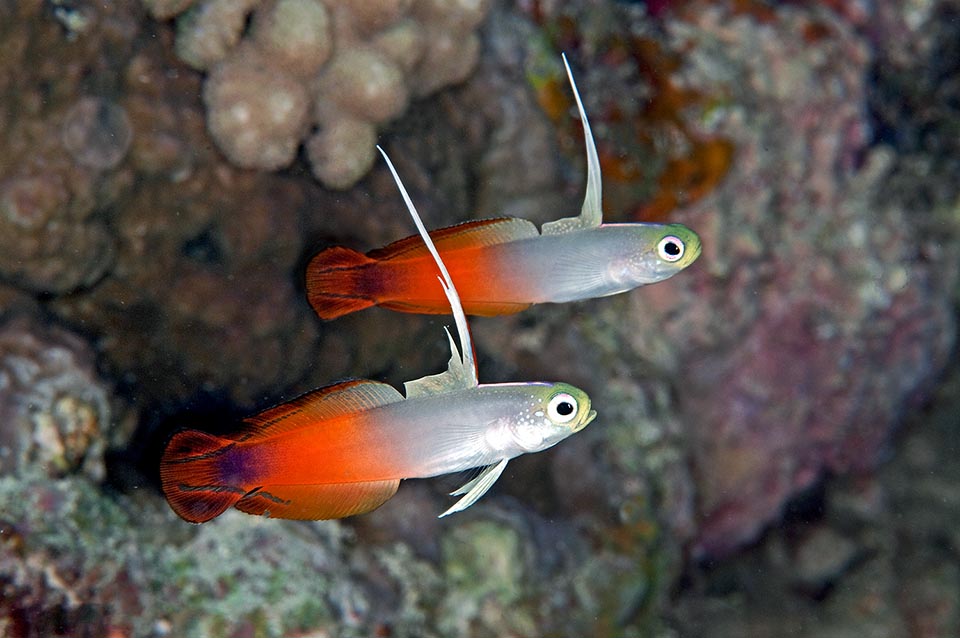 Adults live solitary or in couple, at times even in the same den where symbiont shrimps of the genus Alpheus take care of the cleaning in exchange of the food leftovers © Karen Honeycutt

The etymology of the genus Nemateleotris originates from the old Greek “νῆμα” (nema) = thread, and Eleotris, a genus assigned to about thirty Gobiiformes having a tapered body. Therefore, it resembles a fish of this type with a particular filiform fin.

About the specific term magnifica, female Latin of “magnificus” = pompous, grandiose, splendid, it is an obvious and deserved reference to the livery. 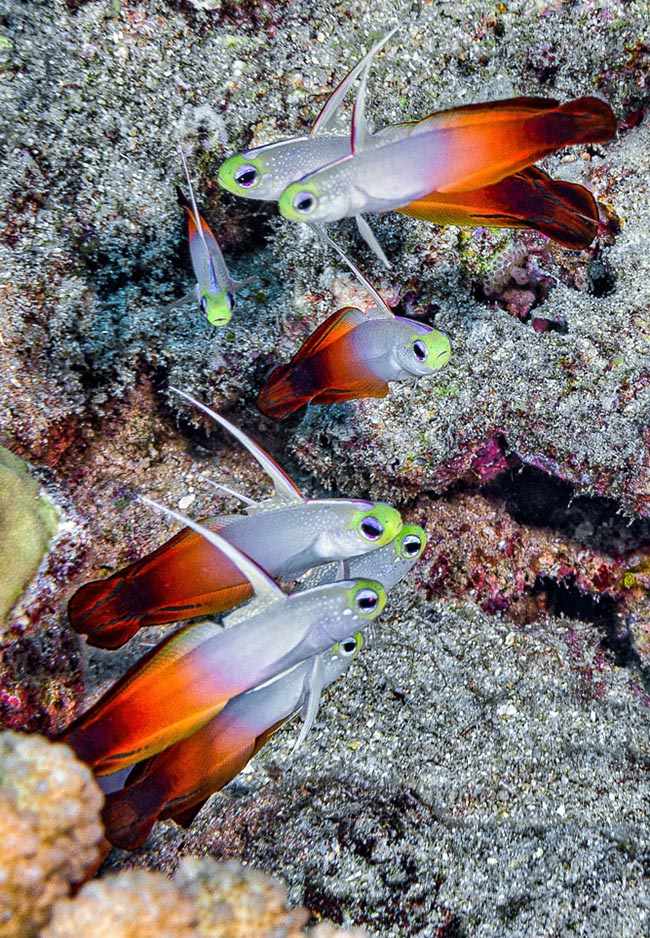 When small schools like this are met it is usually matter of juveniles, smaller but a look similar to the adults © François Libert

Nemateleotris magnifica has a very vast diffusion in the tropical Indopacific.

Indicatively, proceeding eastwards from the eastern African coast going from Tanzania to South Africa, we find it in the islands of Réunion, Mauritius, Comoros and Seychelles.

It is then present in the Chagos Islands, the Maldives, in Sri Lanka, the Andaman Islands, Cocos and Christmas, Timor-Leste and Papua New Guinea.

From here, northwards, it reaches the Philippines, Vietnam, Taiwan, China and Japan, whilst southwards, after Australia, has colonized the New Caledonia, the Vanuatu Islands, the Marshall Islands and Fiji.

After Micronesia, Hawaii and Polynesia, finally reaches the Pitcairn Islands.

The Fire goby is a benthopelagic species, that is, swimming not far from the bottom.

Even if it can reach 70 m, it usually lives in relatively shallow waters, between 6-8 m of depth, adapting to various environments with temperatures included between 22 and 28 °C.

It usually moves on the outer side of the reefs but also on the clastic or rocky bottoms provided the presence of suitable hiding places.

It fits the holes it finds or digs them in the sand: solid shelters, located in strategic places where currents are passing, to disappear with a flicker at the first sign of danger.

It goes hunting, hovering over the den, copepods, larvae of crustaceans and all what is carried by the rivers of zooplankton.

Nemateleotris magnifica does not exceed 9 cm. The head, roundish and scaleless, is almost completely occupied by the bug eyes. The mouth, protractile, has fleshy lips and a set of lips present, on a unique row, on both jaws. 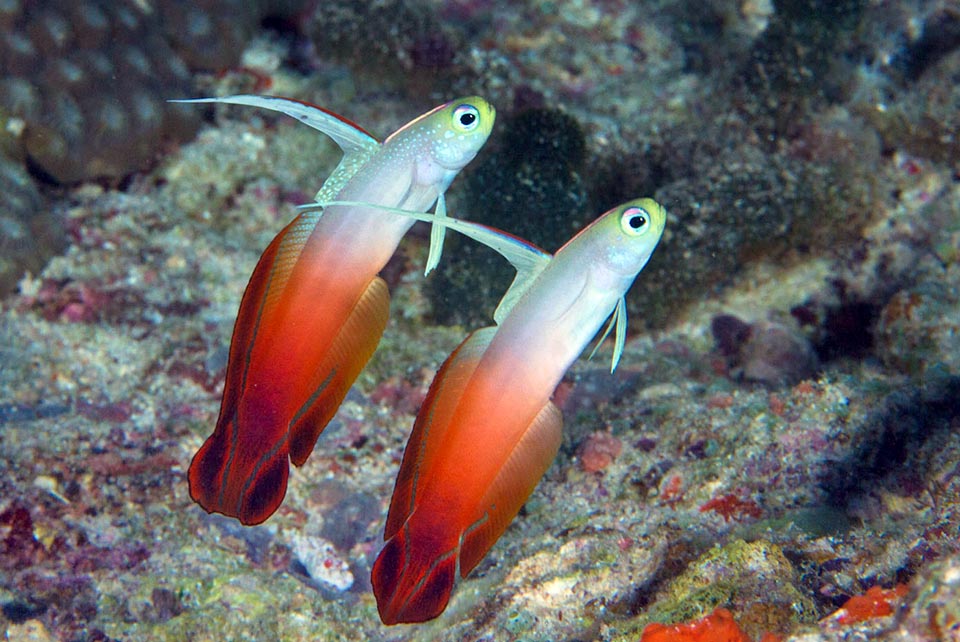 For courting, the male, distinguishable by the usually longer ray, swims in a circle around the partner © Mark Rosenstein

The fusiform body has two continuous dorsal fins, that would appear to be separated by a conspicuous incision, with a total of 7 spiny rays and 28-32 soft ones.

The first, spear-shaped, slightly longer in the males, is at times yellowish with the upper red border emphasized by a light blue violaceous trait resumed, with less evident drawings, in the lower side that has also a fine clear punctuation. 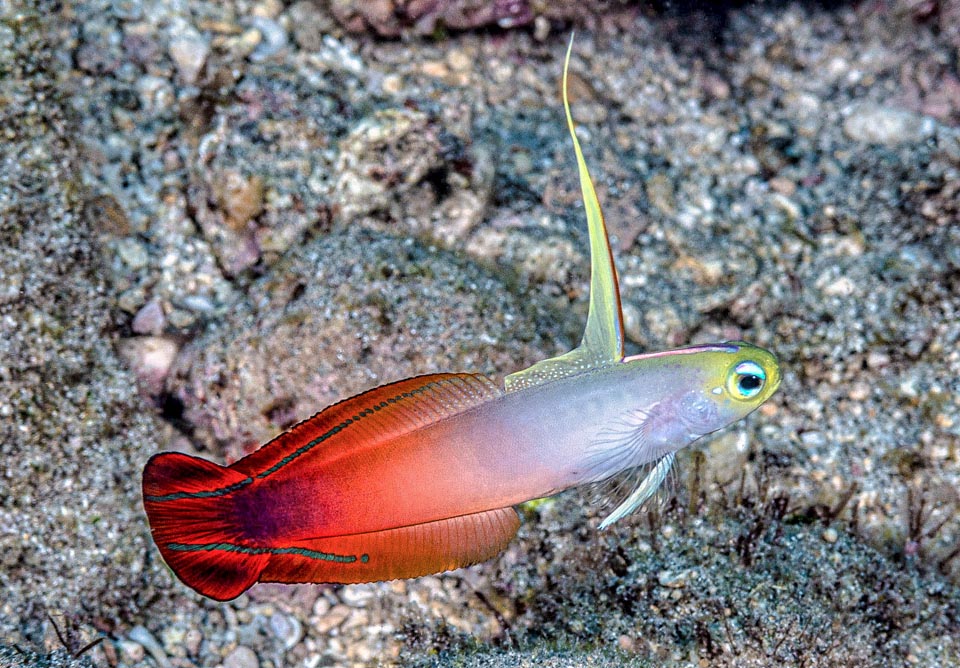 The eggs are spawned under the rocks or in small ravines. The male, sometimes helped by the female, surveys them and defends them with sword drawn until hatching © François Libert

This unusual standard can be raised vertically for an intimidating purpose and in the adult males is so long that it reaches, folding up, the caudal peduncle. 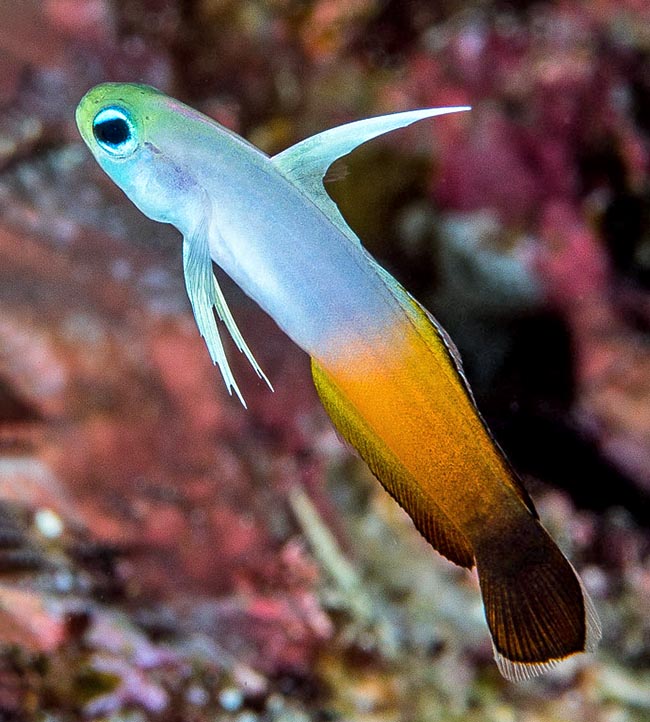 A juvenile. The final part of the caudal fin is transparent. Drawings are absent and the red must still light up © François Libert

Unlike the Gobidae, like, for instance, the Gobius niger of the Mediterranean, these are not fused together to form a sucker for anchoring on the rocks.

In the first half of the body, the background colour is yellow greenish, tending to lemon on the head. degrading to nacreous towards the belly, quickly fades to orange and dark red towards the tail.

After the eye, on the back, is present a slight pale punctuation with violaceous shades, and over the head, up to the fin, stands a characteristic clear violaceous band.

The Fire goby is monogamous and lives in a couple. When it is sighted in small schools it is usually a matter of young, hardly distinguishable from the adults, but the size, because they do have the same livery.

Nemateleotris magnifica often shares the den with shrimps of the genus Alpheus that clean up the house in exchange of leftover food.

It has been noted that the male courts the female spinning insistently around her with the raised fin to display its boldness, till when this one, stunned and convinced by the roundabout, surrenders.

The eggs are laid under the rocks or in small ravines, and the male, sometimes helped by the female, surveys them bravely defending them until hatching.

Often proposed for its small size and its beauty as aquarium fish, the Fire goby is badly suited to the home. 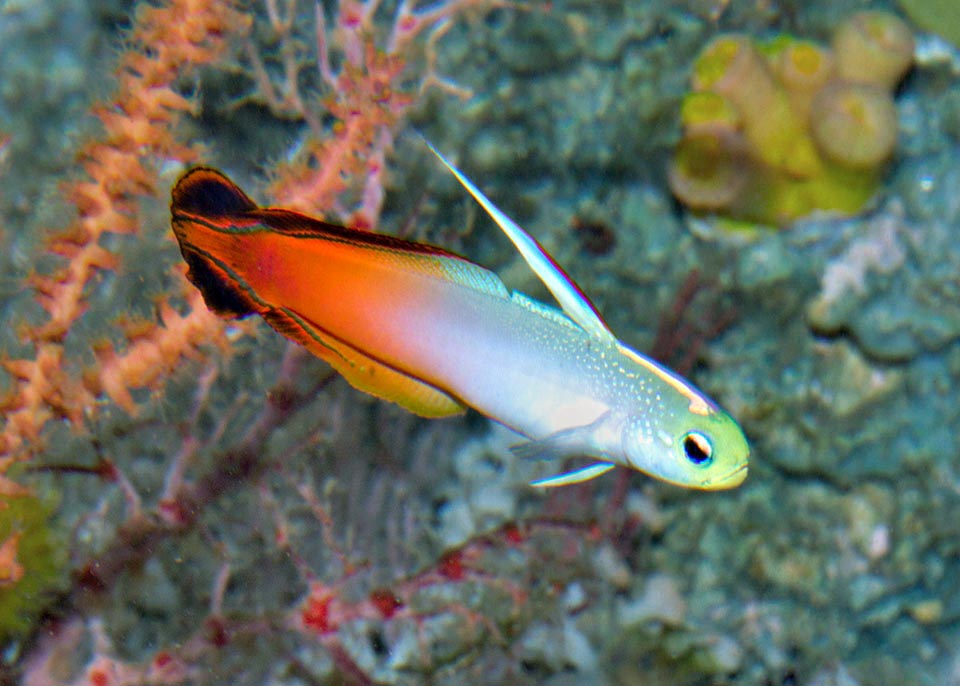 Often proposed for its beauty and the small size, Nemateleotris magnifica is not unfortunately a fish for beginners, suitable for the domestic aquaria © Giuseppe Mazza

Problems of coexistence apart, it has little resistance to diseases, gets used with difficulty to the dry food and it is necessary to check every day the parameters of the water because it does not tolerate decreases of the PH and excessive concentrations of nitrates and of phosphates.

Presently, in 2022, the resilience of the species is good, with a possible doubling of the populations in less than 15 months. It does not fear climate changes and the fishing vulnerability is almost non-existent, marking only 10 on a scale of 100. Therefore, it is reported as “Least Concern” in the Red List of the endangered species, because nowadays it does not cause great concern.