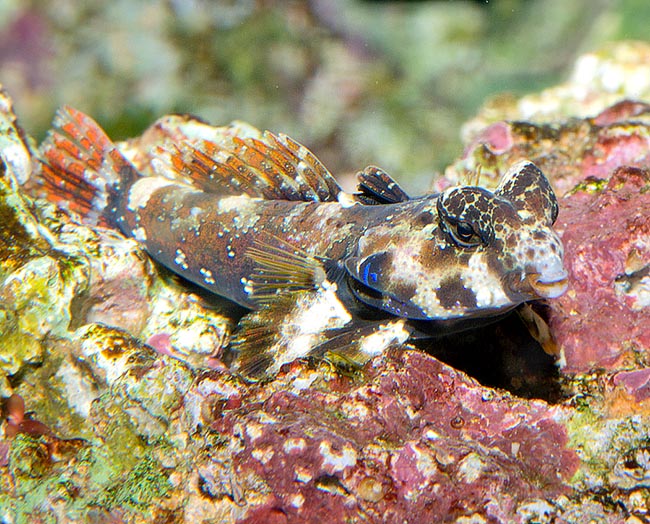 Master in mimicry, the Ocellated dragonet (Neosynchiropus ocellatus Pallas, 1770) belongs to the class of Actinopterygii, the ray-finned fishes, to the order of Perciformes and to the Callionymidae, a family of benthic fishes that, evolutionarily talking, is close to Gobiidae.

It counts about twenty genera and almost 200 species commonly called dragonets due to their unusual look, without scales.

Under the skin, on the preoperculum, they have on both sides a big sharp spine that causes painful wounds, long to heal, hence the recurrent name of spider fish.

The genus Neosynchiropus comes from the Greek “νέο” (neos) = new, “συν” (syn) = with, “χείρ” (cheir) = hand and “πούς” (pus) = foot, to tell us that, as happens for the similar genus Synchiropus, the fins are used also as “feet” for moving among the madreporic formations on the seabed.

The specific name ocellatus, comes from the Latin “ocellus” = eye, with reference to the drawings on the first big dorsal fin of the males, and to the numerous mimetic ocelli of the livery. 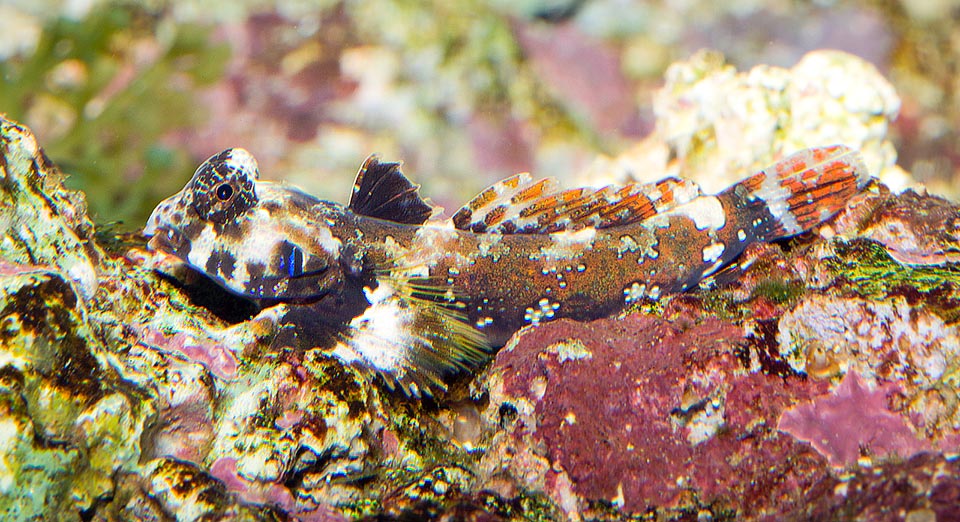 Mimicry master, has 4 spiny rays in the first dorsal fin and a big sharp spine under skin in the preoperculum evidenced by a blue trait © Giuseppe Mazza

It moves on the bottom, along the slopes of the madreporic formations up to about 30 m of depth.

It rarely exceeds the 8 cm with an elongated and cylindriform body. The eyes are close and protruding on the head that, seen from above, reveals triangular and pointed, just like a dragonet. The mouth is protractile with various rows of tiny teeth. There are two dorsal fins and as happens for the Synchiropus picturatus and the Synchiropus splendidus the first, that has 4 spiny rays, is more developped in the males. The second has 8-10 soft rays. The anal fin, with 7-9 rays, has no spines, like the ample pectoral, that have 18-23 rays and the ventral ones on which it walks. The caudal fin is rounded. 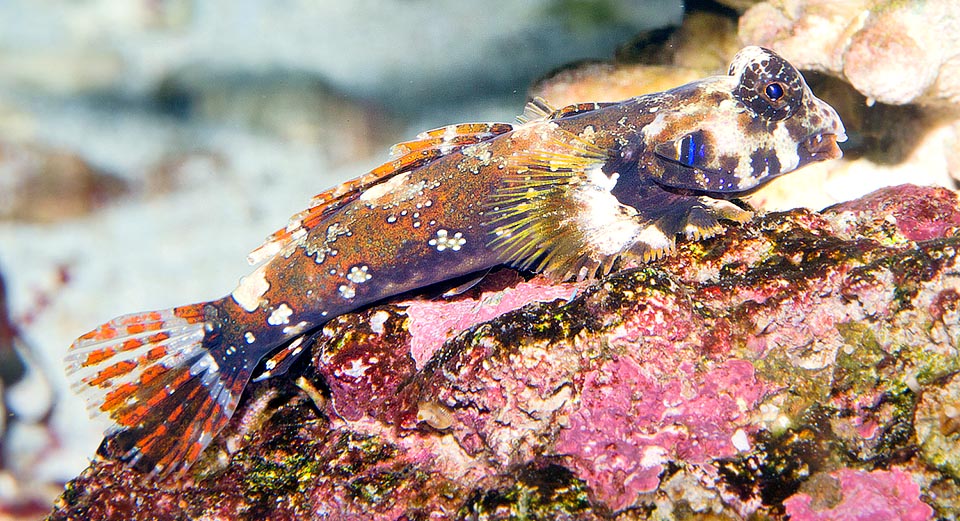 Rarely exceeds 8 cm. The pectoral fins, as well seen in the photo, have adapted to deambulation © Giuseppe Mazza

As typical of the Callionymidae, under the skin of the preopercula stands a big spine marked, like a warning, by a vertical blue trait, that serves as defence and for the fights among males. The openings of the gills are reduced to small orifices in the upper part of the head. It is scaleless, but the body is protected by mucus, secreted abundantly when the fish is menaced or under stress. It defends it also from the parasites and has an odour decidedly unpleasant to the predators. On the reddish brown background both sexes have a perfect mimetic suit with white spots, dark zones and white ocelli edged in black. Are present also dark dottings on the clear zones and an almost red sketch on the dorsal fin resumed also by the caudal for interrupting its transparency. The vast pectoral fins have golden rays.

The ocellated dragonet lives in small groups nourishing of the benthic microorganisms it finds on the detrital seabeds, the weeds and the corals. These are mainly ostracods and harpacticoid copepods, but also eggs of mollusks and fishes or swimming larvae of various species. For the marriage the spouses go up to the surface embraced, belly to belly, and after the fecundation they entrust the floating eggs to the currents. 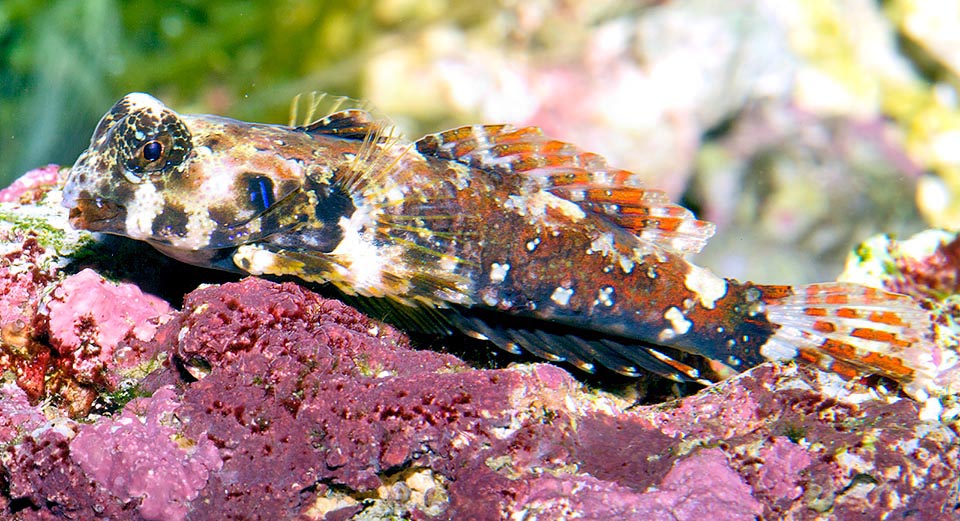 It nourishes jumping on small crustaceans without ignoring the eggs and the swimming larvae it finds on the seabed. It is not endangered © Giuseppe Mazza

It has reproduced in captivity and is comfortable in the big aquaria where with the time, thanks to the corals or to the water taken at sea, have settled planktonic crustaceans. It is also a useful remedy for the infestations of planarians.

The resilience of the species is excellent: in fact are sufficient 15 months to fill the losses in populations decimated by the events. The pressure exercised by the aquaria market is practically zero and however may the things go the Neosynchiropus ocellatus will always find something to eat. The vulnerability indesx of the species is very low: just 13 on a scale of 100.