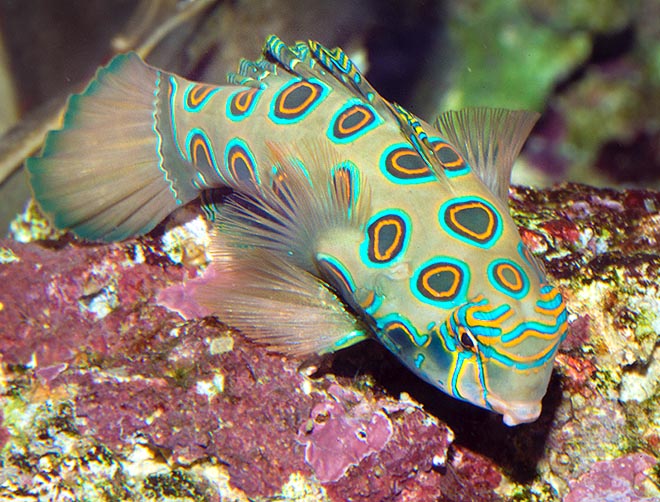 The Picturesque dragonet or Green spot mandarin (Synchiropus picturatus Peters, 1877) belongs to the class of Actinopterygii, the ray-finned fishes, to the vast order of Perciformes, the largest of the vertebrates with about the 40% of the extant fishes, and to the family of Callionymidae, a group of benthic fishes that, evolutively speaking, is close to the Gobiidae.

It has about twenty genera and almost 200 species vulgarly called dragonets due to their odd look, without scales. Under the skin, on the preoperculum, they have on the two sides a sharp spine that causes painful wounds, long to heal, whence the recurring common appellation of spider fish.

The name of the genus Synchiropus comes from the Greek “συν” (syn) = with, “χείρ” (cheir) = hand and “πούς” (pus) = foot, to tell us that the ventral fins are used also as feet.

The specific name picturatus, means in Latin painted, with obvious reference to the splendid ring drawings it has on the body.

The picturesque dragonet is at home in the Indo Pacific tropical waters. Indicatively, we find it in Indonesia, Malaysia, Singapore, Philippines, Taiwan, Australia and Papua New Guinea. 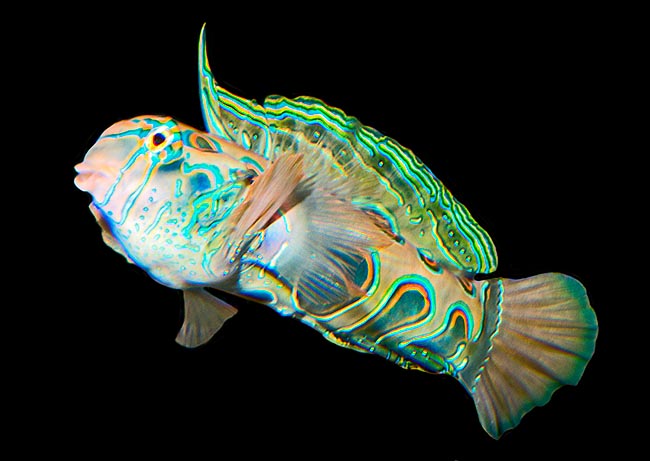 Male in nuptial parade. This species dimorphism practically limits to elongated rays of the first dorsal fin <br />that when open almost merges with the second. It is also good to intimidate the rivals © Giuseppe Mazza

It usually lives in shallow waters along the slopes of the madreporic formations without exceeding the 20 m of depth. It moves slowly on the bottom looking around with its great telescopic eyes for possible dangers and small preys.

It does not exceed the 7 cm. The body is elongated and cylindriform, with close eyes and protruding from the head that, seen from above, reveals triangular and pointed. The mouth is protractile with various rows of tiny teeth.

The morphology of the fins is very similar to that of the congener Synchiropus splendidus. Also here there are two dorsal fins and the first, roundish in the females, is particularly elongated in the males. Usually it is bent on the back, but can raise in a moment, like a flag, with the first spiny rays well evident, to charm the companions and to discourage the rivals. This is practically the only element of sexual dimorphism. As briefly said before, under the skin of the preopercula stands a hidden spine that serves as defense and in the territorial fights among males. The openings of the gills are reduced to small orifices.

It has no scales, but the body is protected by mucus, secreted in abundance when the fish is menaced or under stress, that defends it from the parasites and has a decidedly repellent odor that the predators quickly associate to the unmistakable livery. 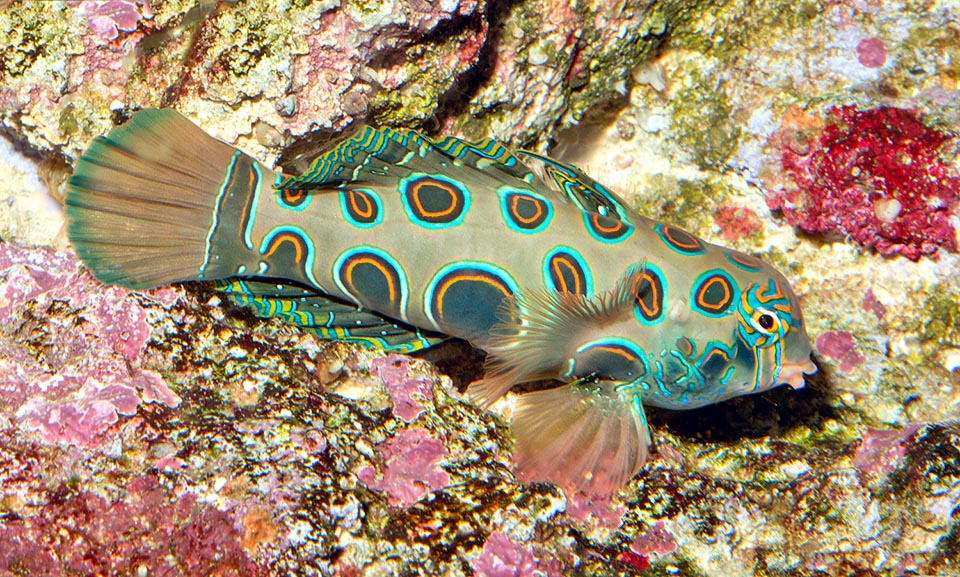 On the reddish brown-greenish background, both sexes have numerous turquoise, black and orange with black center concentric rings. Colors that are resumed on the cheeks, on the head and on the dorsal and anal fins where the turquoise is associated with yellow stripes. In short, also here a wonder worthy of the dress of a Chinese mandarin. Like for Synchiropus splendidus, , the colors are authentic and do not depend, as often is the case in the world of fishes, from the light incidence. The iris, yellow-orange, is surrounded by a rayed mimetic design that resumes the colors of the body. The chinstrap is pale, crossed by turquoise bands and dottings. Also the ventral part, normally hidden, shows the prolongation of the rings tapering into bands to reach the other side. 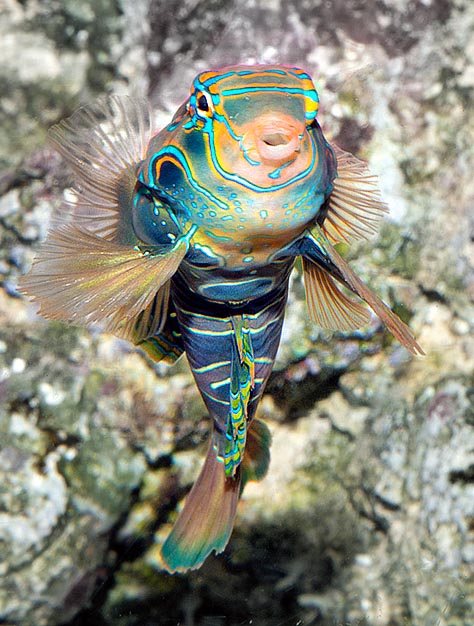 Nourishes practically of plankton and is not endangered © Giuseppe Mazza

At the level of the peduncle the circles transform in a showy vertical band where the black color is predominant. The caudal fin, rounded, tends like the pectoral and the ventral ones to the reddish to end greenish with a last yellowish small border.

The picturesque dragonet lives solitary or in small groups nourishing of microcrustaceans it finds among the corals, mainly ostracods and harpacticoid copepods, but also of eggs of mollusks, fishes and larval stages of various species. The males are much territorial, but allow the females to enter their small kingdom attacking the competitors.

For the marriage the spouses rise to the surface embraced where, after complicated rituals, the fecundation takes place belly to belly while entrusting the floating eggs to the currents.

It is not, as we are led to believe seen the small size, an easy aquarium fish. Even if it has reproduced many times in captivity, it is suitable only for big pools where with the time have settled some planktonic crustaceans. Otherwise it is necessary to administer alive larvae of Artemia salina because at the beginning the picturesque dragonet throw themselves only on what moves. Only later one they will accept frozen brine shrimps and other microscopic species such as Cyclops and Mysis.

In any case, they reveal very useful for the removal of the planarians that sometimes infest the old aquaria, but it is not possible to host two males that, unlike females, would immediately engage in bloody fights due to their innate territoriality.

The resilience of the species is excellent: in fact are sufficient just 15 months for reintegrating totally the members in case of catastrophe. Like for Synchiropus splendidus the pressure done by the aquaria market is practically zero and in spite of climate changes the Synchiropus picturatus picturatus will always find something to eat. The vulnerability index of the species is consequently very low: just 11 on a scale of 100.